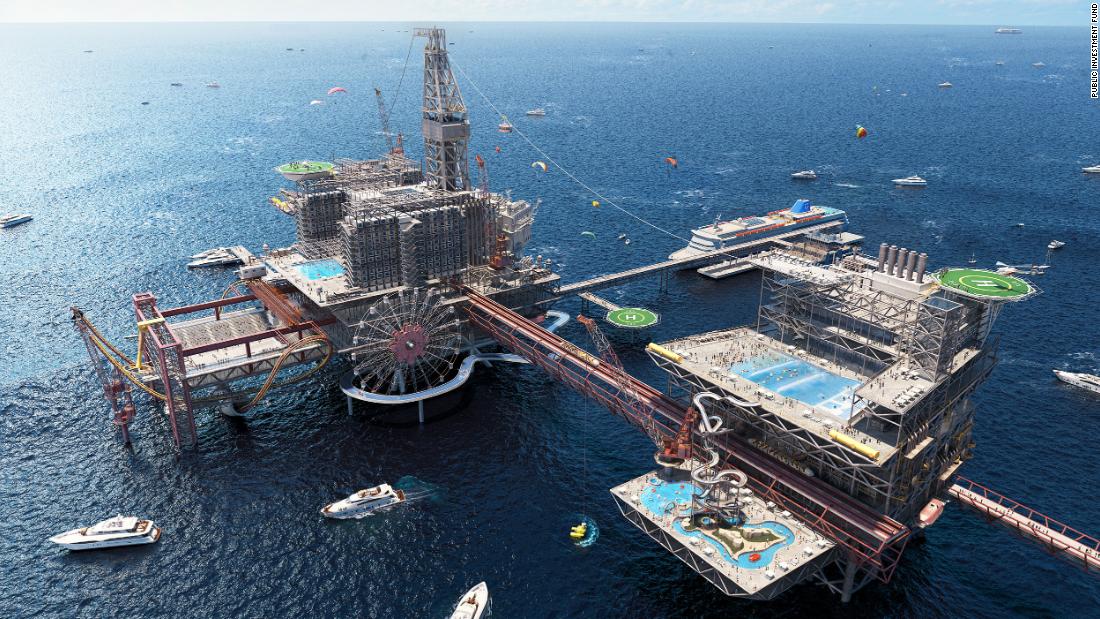 (CNN) — Saudi Arabia may be trying to reduce its dependency on oil, but that hasn’t stopped the Arabic kingdom from using its petroleum industry as inspiration for a brand new tourist attraction.

The Middle Eastern country has announced plans to convert an oil rig into a 150,000 square meter “extreme park” and resort located in the Arabian Gulf.

Funded by Saudi Arabia’s Public Investment Fund (PIF),The Rig will be comprised of three hotels and 11 restaurants spread over a number of connected platforms, as well as roller coaster rides and adrenaline-rush activities like bungee jumping and skydiving.

A rendering of upcoming Saudi Arabia ‘extreme park’ The Rig.

Renderings of the upcoming attraction, which aims to “provide a multitude of hospitality offerings, adventures, and aquatic sporting experiences,” along with a promotional video, were released earlier this month.

“This project is a unique tourism attraction, expected to attract tourists from around the world,” said a statement from the PIF. It said it was expected to be particularly popular with visitors from the Arabian Gulf region.

A completion date for the venture has not been stipulated.

The project, which takes inspiration from offshore oil platforms, is to be located on a rig in the Arabian Gulf.

Described as the “world’s first tourism destination inspired by offshore oil platforms,” the upcoming attraction is being devised in line with the long-term Saudi Vision 2030’s strategy, which aims to reposition Saudi Arabia as a top international tourism destination and diversify its economy.

While millions of religious visitors make the pilgrimage to the Saudi holy city of Mecca every year, the country’s conservative laws restricting women’s freedoms, along with it troubling human rights history have made it a less than favorable destination for many international visitors.

The Rig is part of a new strategy that aims to boost tourism in Saudi Arabia.

But the country is determined to reposition itself as an alluring global hotspot that can compete with the likes of nearby Dubai, Abu Dhabi and Oman. It aims to attract 100 million tourists each year by the close of the decade.

Earlier this year, plans for a second national airline — the kingdom’s current flag carrier is Saudia, formerly known as Saudi Arabian Airlines — and to invest $147 billion into transport and logistics over nine years were confirmed by Saudi Arabia’s Crown Prince Mohammed bin Salman.

It will feature a number of attractions, including three hotels restaurants and various adventurous activities.

News of The Rig project comes just months after plans for Six Flags Qiddiya were announced.

The site is being constructed as part of a new city situated outside capital city Riyadh and will be home to the world’s fastest roller coaster when it launches in 2023.