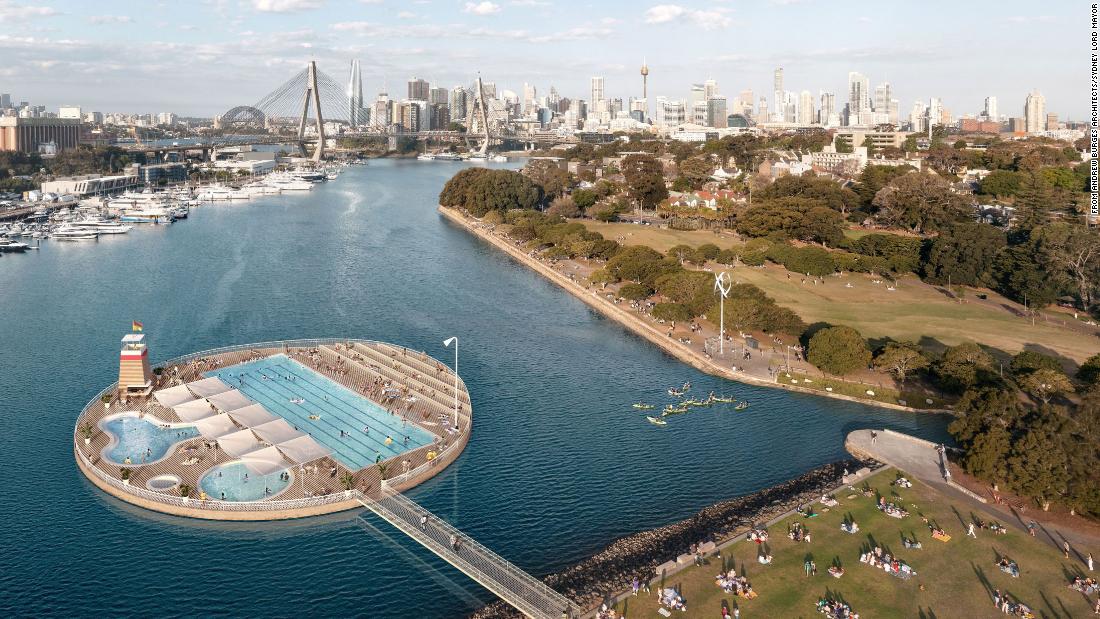 (CNN) — Clover Moore, the lord mayor of Sydney, has presented an ambitious plan that imagines the city’s legendary harbor as a swimming pool.

“Swimming in the harbor is no pipe dream. Cities around the world are turning to their natural harbor assets rather than building more infrastructure,” Moore wrote in her pitch, which was adapted from a speech she made at the Sydney Water Innovation Festival on October 18.

Moore’s office commissioned Australia-based Andrew Burges Architects (ABA) to reimagine what Sydney Harbor could look like if there were sections accessible for public swimming.

Her proposal mentions that climate change and an increasing population will both change Sydney’s makeup in the decades to come, and with green space at a premium, cleaning up the harbor and making it swimmable could be a good way to give residents a way to cool off.

Some of the sites that ABA thinks would be good for public swimming are Pirrama Park in Pyrmont and Beare Park in Elizabeth Bay.

“This vision rests on improving water quality,” Moore added. “Some parts of our harbor are highly polluted and cleaning up these waterways so they can be used for recreation and to improve biodiversity will require cooperation across all levels of government.”

The plan, which is still just a proposal, was inspired by a similar initiative in Copenhagen aimed at cleaning up the city’s waterways and making them more accessible for regular people.

Its ambitious Waterfront Cultural Centre, a 53,820 square foot homage to Copenhagen’s harbor history, will have both indoor and outdoor public pools. Japanese architecture firm Kengo Kuma & Associates won the contract to design the center. No opening date has been announced yet.

Moore has been lord mayor of Australia’s biggest city since 2004 and was the first woman elected to fill the role.

New South Wales, the state that is home to Sydney, has a stated goal to halve its use of fossil fuels by 2030.

“Our Net Zero Plan is expected to attract more than $37 billion in private sector investment into NSW, support more than 9,000 jobs, save households about $130 on their electricity bills and help NSW become Australia’s first trillion-dollar state by 2030,” the state’s premier, Gladys Berejiklian, said in a statement last month.

Top image: A rendering of a floating pool in the Sydney Harbor. Credit: Andrew Burges Architects