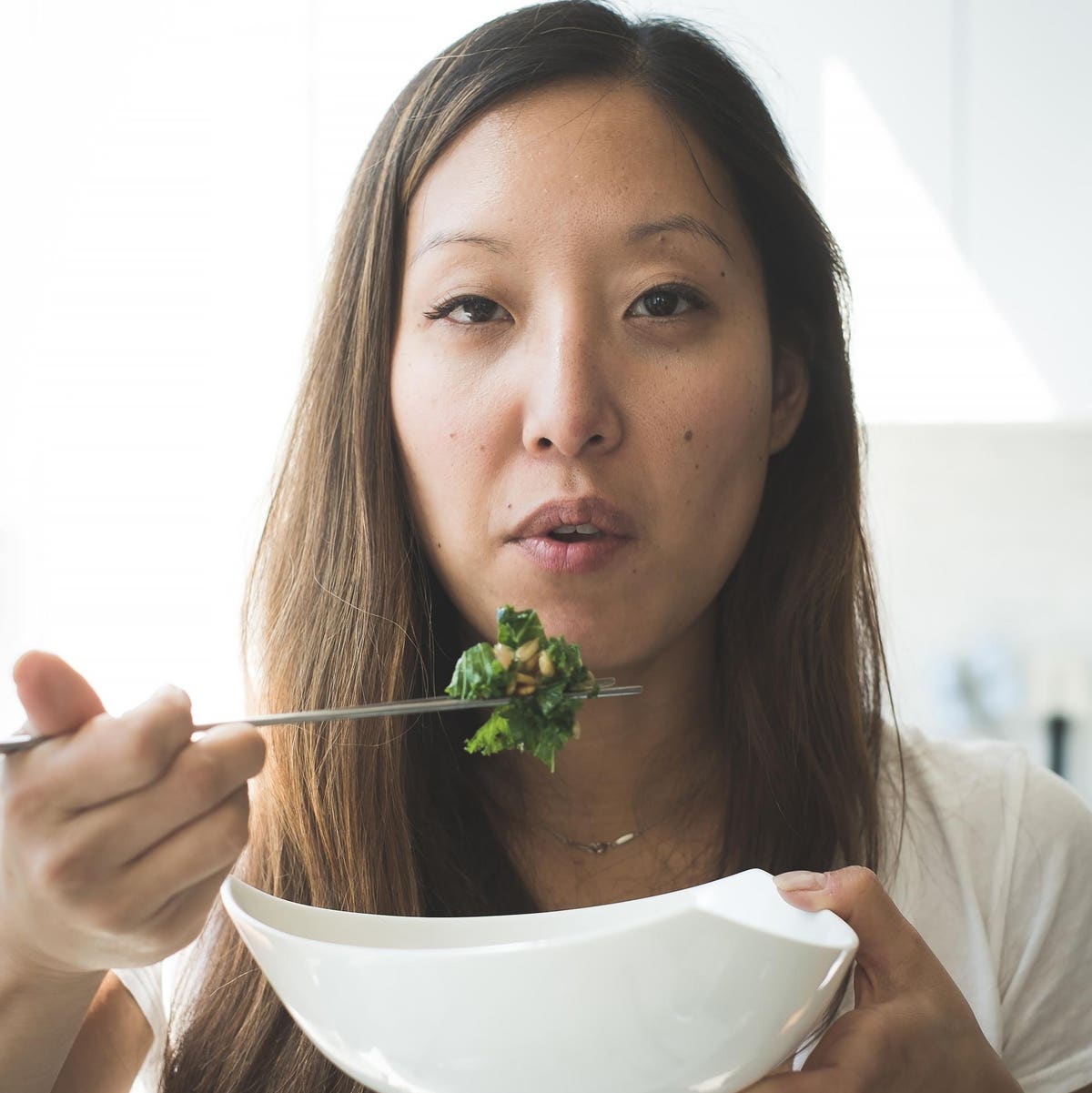 When food blogger and antitrust lawyer Joanne Lee Molinaro started posting on TikTok as TheKoreanVegan, the audience she had spent years trying to cultivate on YouTube and Instagram suddenly exploded.

Now, she has 2.7 million followers on the platform best known for its dance challenges. Those viewers probably take their time scrolling because of her beautiful cinematography. But they stick around for her introspective cooking content.

“While it was growing so quickly, I was also learning what it even was. Now the biggest emotion I have about my community is a sense of responsibility.”

Not all online creators approach their work that way, but Molinaro doesn’t have the average recipe blog. Or the average cookbook.

Her first book, The Korean Vegan Cookbook: Reflections and Recipes from Omma’s Kitchen, was just released in October, and it is as much a piece of striking memoir as it is an instruction manual for how to eat plant-based versions of the foods she loves most.

When Molinaro and her husband went vegan a few years back, she quickly realized that a surprisingly small number of Korean recipes were vegan-friendly, despite the cuisine’s vegetable-forward reputation. She felt like he was asking her to give up her culture.

But she was willing to try, as long as she got to experiment. Those experiments are why she started TheKoreanVegan. They’re also how she realized how little she knew about her own food culture. It gave her a reason to get in the kitchen.

Before long, she was watching hours of Maangchi videos while on the treadmill at the gym, calling her relatives for culinary advice, and eventually “engineering vegan versions of these recipes” with the very research-based diligence that made her successful at her law firm.

Before long, she started making recipe videos, both Korean and not. Her food was good, but what stood out about her content was the brutally honest voiceover all about her life, her trials, and her experiences growing up as a second generation Korean immigrant.

Molinaro has always had a strong instinct to “fight the good fight”, whether as a lawyer or an online creator. As such, she has very deliberately woven a sense of advocacy into her videos. Her work deals with love and loss, racism and war, mental health and the difficult decisions we make every day, just being alive. She points out that, “Everyone needs to eat. Everybody loves food, they need to love food. So why not give them something else with that plate? Feed more than their body.”

Talking about hard subjects in relation to food seemed like a natural progression for her, not only because of food’s universality, but because she has dealt with disordered eating for most of her life. So when she started TheKoreanVegan, Molinaro felt that not addressing her problems with food would make her content dishonest.

“My hope is that by being more transparent and not saying anything that is not entirely truthful about these issues, it will encourage people to feel like there’s no stigma attached. You don’t have to be ashamed of these struggles… What’s not ok is you hiding it and pretending it doesn’t exist or shoving it somewhere because you don’t want to deal with it or because somebody told you you shouldn’t.”

The stories Molinaro tells are effective, but they wouldn’t resonate with her audience so much if the food itself wasn’t just as impressive. Flipping through her new cookbook, it’s immediately obvious how much Molinaro loves to eat, and how important it is for her to maintain a connection so the food she grew up with.

“I’m not into looking up vegan recipes. That’s not my thing. When I recipe develop, I go directly to the source. If I want to make kalbi, I’m not going to look up the vegan version of it. I’m going to look up the real thing and figure it out my own way.” Before long, she was watching hours of Maangchi videos while on the treadmill at the gym, calling her relatives for culinary advice, and eventually “engineering vegan versions of these recipes, feeling very confident that it was coming from a source I found reliable.”

Vegan food can often suffer from less than careful adaptation, but Molinaro’s food is determinedly defiant of that stereotype. When recipe developing for her book, she worked closely with her mother and other relatives to create her vegan kimchi. The recipes that would usually include meat are merely bulked up with additional vegetables, rather than changed to be noticeably veganized.

Her food also follows the same sense of honesty that suffuses the rest of her content. Molinaro might be Korean, but she grew up in the United States and has an Italian last name. As such, she’s made an effort to include not just Korean recipes, but things that make her happy, no matter what they look like. She teaches readers to make her red bean pecan pie, ramen kale salad, and even a take on Roman suppli with Korean flavors.

When it comes to authenticity in food, and indeed, everything else, everyone has an opinion. But by sharing so much of herself in her videos, her recipes, and her unflinchingly honest book with its tales of how her mother “nearly died when she was less than a year old” while her family fled North Korea, Molinaro has made it clear that what is authentic to her experience is what actually matters.

Hopefully, her audience will pick up a little bit of that spirit with every bite.