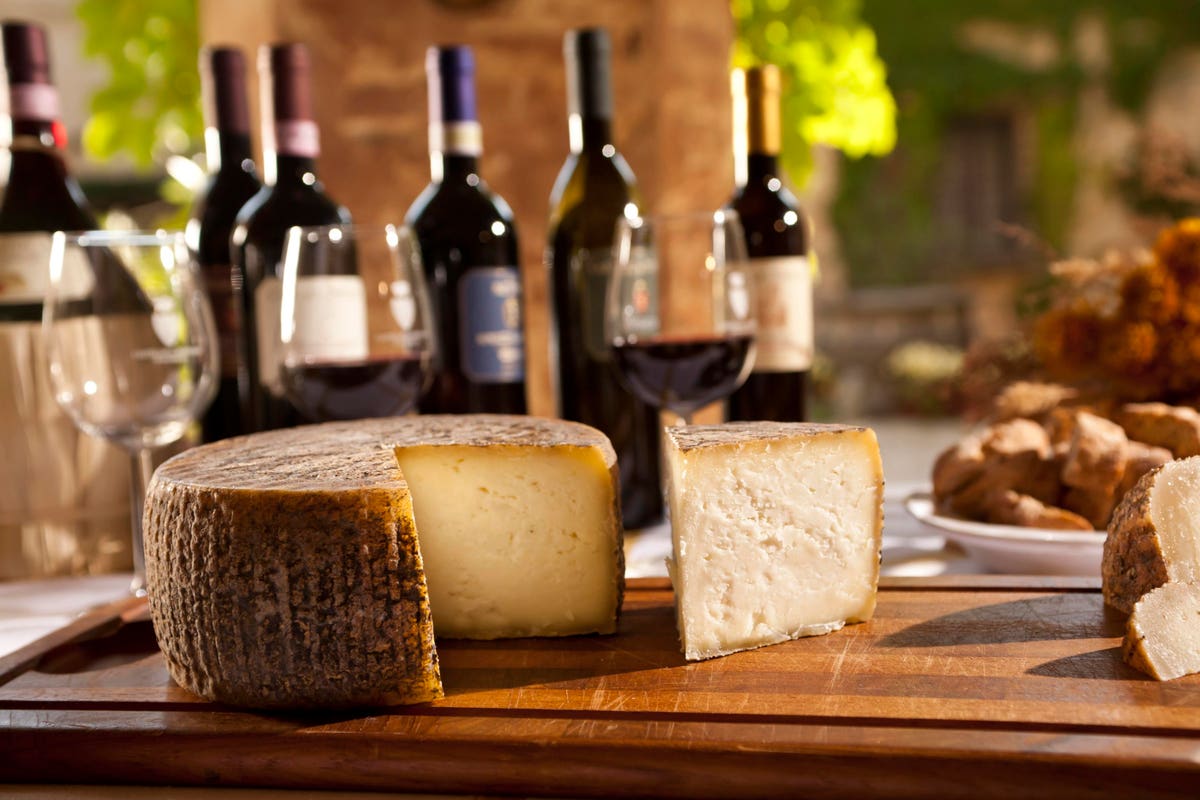 Produced in different regions, provinces, and small villages—from the north to the south—the best Italian PDO cheeses are made according to traditional production and processing methods handed down over generations.

“Italy is an extraordinary place. Its various ecosystems and its rich variety of landscapes translate into an incredible array of culinary treasures, particularly cheeses,” says Genny Nevoso, Executive Director of the Italy-America Chamber of Commerce West.

Consumers can be assured of the quality and authenticity of the 55 PDO Italian cheeses because they carry the Protected Designation of Origin (PDO) designation from the European Union.

“Each tells a story dating back thousands of years in time,” says Nevoso. “Italian cheeses are so intrinsically connected to their territory, their local resources, and climate. It’s like traveling through your palate at every bite,” she adds.

These versatile Italian imports can be enjoyed with wine before or after dinner, incorporated into recipes for appetizers, main dishes, and desserts—or purchased as holiday gifts for food enthusiast friends, family, and colleagues. Imagine gifting a cheese that was produced in the very same place someone you know visited, was born, or has family ties.

Links for online purchases are below, but many of these cheeses can be sourced closer to home if you are fortunate to have a local cheesemonger, specialty grocer, or Italian salumeria in your area.

Join us on this culinary tour of some of the most delicious regional cheeses of Italy! Buon appetito!

Castelmagno is a cylinder-shaped, semi-hard, semi-fat blue cheese made from cow’s milk, with a small amount of added sheep or goat’s milk. To guarantee its authenticity, the milk used in its production must come from towns protected by the PDO designation: Castelmagno, Pradleves, and Monterosso Grana in the province of Cuneo, Piemonte. The cheese is aged two to five months to obtain its traditional flavor.

Castelmagno is dense, almost crumbly in texture, and varies in color from ivory white to pale yellow, with bluish-green veins of penicillium molds. The rind is reddish yellow, which turns wrinkly and brownish as the cheese ages. Its taste also gets sharper and more intense with time. This cheese pairs beautifully with honey and a glass of Barolo wine.

Taleggio PDO comes in squares and varies in color from white to straw yellow. The pinkish crust is soft and thin with greyish or light sage-green mold. The cheese is compact and gets softer and more buttery (like Brie) as you get closer to the rind. After ripening, it is crumbly in the center.

Taleggio has a sweet flavor with a slightly sour hint and, at times, a truffle aftertaste. It is often an ingredient in many main dishes, including meat-based ones and in pasta dishes, gnocchi, pizza, and crêpes. It pairs exceptionally well with sparkling Franciacorta wines and Trentodoc.

Piave PDO is produced only in the Province of Belluno in the region of Veneto. The milk used for the production of Piave PDO comes exclusively from the province of Belluno, in an area bordering the Dolomite Mountains National Park. An objectively demanding territory to farm.

This cheese is mild when young. Like Parmigiano Reggiano PDO, its flavor changes and intensifies with time, becoming fruitier and richer in taste. A popular grating cheese, it becomes more meltable as it ages. Piave pairs particularly well with Spumante Garda DOC wines.

Pecorino Toscano has a long history that Pliny the Elder mentioned in Naturalis Historia (AD77). Today, as in the past, this cheese plays a prominent role in the dairy traditions of Tuscany. The milk for this cheese is produced in Grosetto (Tuscany) and a few neighboring municipalities in Lazio and Umbria.

FRESH PECORINO TOSCANO: Pecorino Toscano is produced exclusively with sheep’s milk from pastures in the area of origin (as required by the production regulations). Beneath its pale-yellow rind, this excellent cheese has a sweet taste and a milky fragrance when fresh. With aging, its aroma becomes more intense.

AGED PECORINO TOSCANO: This semi-hard cheese must be aged for at least 120 days but may be aged for up to a year. It can be recognized by its cylindrical shape and by the fire-branded PDO logo on the rind. The cheese is pale straw yellow in color with the distinctive aroma of dried fruit and hay (these notes can be increased by ripening the cheese longer). The cheese has some irregular and well-distributed holes and a thin yellow rind that is uniform, smooth, and compact.

These cheeses are often used grated over salads, served with figs, and pairs well with red wines like Chianti, Brunello, and Barbera d’Alba.

Asiago Pressato, also known as Asiago Fresco or “fresh Asiago,” is produced from whole, pasteurized cow’s milk from cattle that graze in low-lying areas of the Asiago Plateau (in Vicenza, Trento, and other parts of Padua and Treviso). The milk is heated together with enzymes to help it coagulate into a curd that is “pressed” (hence the name pressato) into a mold. After wrapping and brining, it is left to age for 20 to 40 days. The resulting cheese is semi-soft, white, or slightly yellowish, with a creamy and smooth texture and large holes. It has a delicate, soft, and sweet taste with the aroma of fresh milk.

Its cousin, Asiago d’Allevo is produced using raw milk from Pezzata Nera and Bruno Alpina cows that graze in higher pastures and is made from a mixture of whole milk and skim milk. The milk is heated, transformed into curd, and pressed into round molds before it is salted and aged. There are three different aging periods for Asiago d’Allevo: Asiago Mezzano (4 to 6 months), Asiago Vecchio (10 to 16 months), and Asiago Stravecchio (15 or more months). The longer the cheese ages, the harder, more yellow, and more intensely flavored it becomes. Asiago Mezzano has a sweet taste, while the Vecchio one is more fragrant and bitter. Asiago Stravecchio is the most intense with a slightly spicy flavor.

Asiago PDO can be eaten on its own or served with cold cuts. It is also often enjoyed after dinner with fresh fruits (like cherries or grapes) and/or with honey, jam or chutneys. It pairs well with sparkling Trentodoc from Trentino.

Pecorino Crotonese PDO comes from the village of Crotone in the Marchesato area of Calabria. This semi-hard cheese has a tender and sweet texture, is generally white or slightly straw yellow, and has a thin rind that usually shows the imprint of the basket that contains it. The flavor is intense and slightly spicy. When cutting a wedge, you can smell sheep milk, as well as hay, ripe field herbs. and hints of hazelnut and smoke.

The cheese pairs well with honey, bread, pasta with red sauces, and bold, red wines like Barolo from Piemonte.

There are two types of Pecorino Sardo PDO, Dolce and Maturo. Both are cylindrically shaped and made with 100% sheep’s (ewe) milk. The production of these cheeses is limited to the region of Sardinia. The PDO label has a green mark for the Dolce variety and blue one for the Maturo.

Pecorino Sardo PDO Dolce is semi-soft, white in color, and has a straw yellow crust. The cheese is aromatic with a subtly acidic flavor. It pairs nicely with a dry white, full-bodied wine like Vermentino produced in Sardinia and Liguria.

Pecorino Sardo PDO Maturo has a sharper, more intense taste and a slightly granular texture. It tends to be straw yellow, with a yellow or brown rind. Excellent when grated over pasta or rice dishes, this variety pairs well with dry red wines like a Brunello di Montalcino.

Made only in Sicily from 100% sheep’s (ewe) milk, Fiore Sardo PDO is an excellent table cheese with a distinct, subtly acidic, and piquant flavor. The cheese can be white or straw yellow, and is often recognizable by its brown or gray thick, rigid, and furrowed crust.

Consumed fresh, it makes a delicious appetizer served sliced or diced, often paired with ash-roasted potatoes or with a slice of bread. Its also used as an ingredient in traditional desserts. It pairs well with Sardinian red wines like Malvasia di Bosa D.O.C.

Produced between the Po and Tyrrhenian Rivers in the province of Emilia Romagna, this cheese is one of the oldest, with a history dating back to the Benedictine monks. It is made with milk from Vacche Rosse, a rare, heritage breed of red cows that almost went extinct. These cows produce one-third less milk than the Holstein variety but their milk works better in the cheesemaking process.

Straw yellow in color (because the cows eat hay rather than grass), the cheese offers a sweet, nutty, delicate taste with an intense aroma. It can only be sold after 24 months of aging (compared to traditional Parmigiano Reggiano that can be sold after 12 months). Another distinction: It is also said to be easier to digest. Often used as a grating cheese, it adds flavor to risotto, pasta, soups. and salads or can be eaten on its own on a charcuterie board. It can be paired with either still or sparkling white wines or medium body reds.

Made with whole cow’s milk, this cheese from Lombardy is soft, blue and buttery. It has blue and green veining and a gray, crumbly rind that is natural but inedible. It is called “dolce” because it is sweeter and creamier than aged Gorgonzola.

It is delicious as a spread on bread or crostini, especially with some figs or honey on top. On an aperitivo platter, it provides a nice counterpoint to hard cheeses. It pairs well with both reds and whites.

Note: With appreciation to Genny Nervoso of Italy-America Chamber of Commerce West, Mathilde Van Tulder of Sopexa, and Sara Massarotto of Eataly for helping curate this list and sharing their expertise.