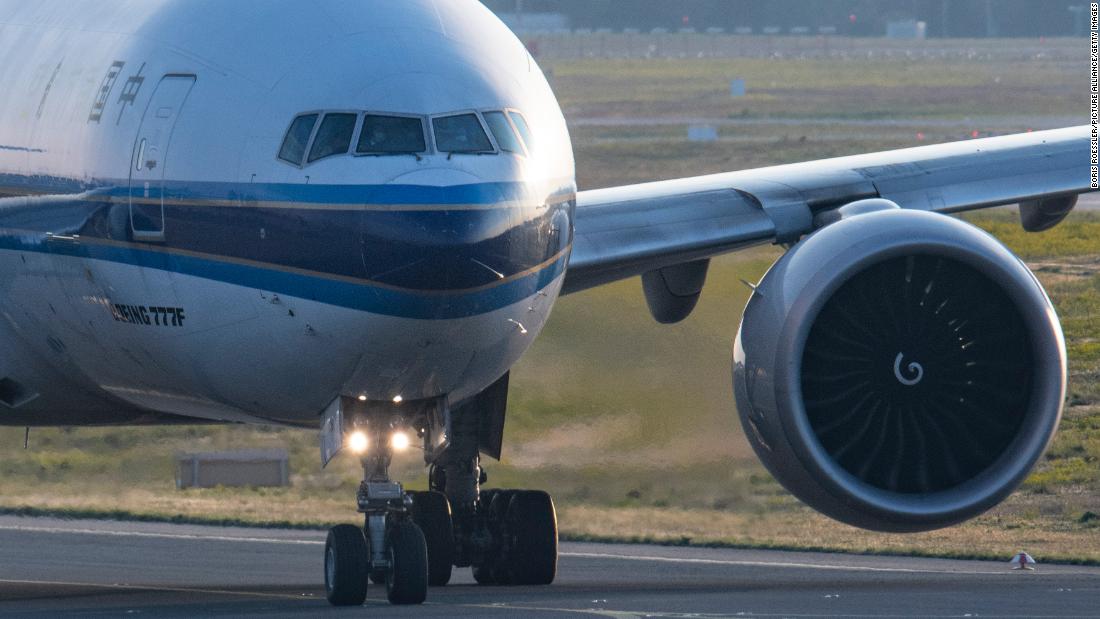 (CNN) — A few years ago, Charlotte Wolf returned from a trip around the world and totted up the number of flights she’d taken.

“I think I did about 80 flights in quite a short space of time,” the 29-year-old tells CNN Travel today.

For Wolf, seeing that number written down forced some hard reflection.

“I was quite a big polluter,” she says.

Wolf had never given much thought to the impact of flying before, but this was a turning point. She swore off aviation.

To cement her commitment, Wolf signed a 2020 no-flying pledge organized by Flight Free UK — a campaign group that promotes alternative forms of travel beyond aviation — unaware that air travel was about to be off limits for much of that year and the next.

By spring 2020, air travel around the world had ground to a halt.

As the skies emptied of planes, the term “staycation” became omnipresent. And even as international travel resumed in fitful intervals last year and this year, many travelers continued to look closer to home for their vacation thrills amid the uncertain global landscape.

Heading in 2022, Covid remains a threat, but borders continue to reopen and international travel is steadily returning.

But while many count down the days until they next board a plane, other eco-conscious travelers like Wolf are committed to remaining flight free forever.

Air travel shut down in 2020 amid the Covid-19 pandemic. Pictured here: grounded Qantas planes at Sydney Airport in April 2020.

Wolf, who is based in England, doesn’t see her pledge to avoid air travel as being at odds with her desire to explore the world.

“I’m still very keen on travel, I still will travel, I will just use alternative means,” she says.

Wolf’s long-term partner is also committed to a flight-free lifestyle. Summer 2020 saw the couple head to the south of France by train, a journey they repeated this past August. They also recently spent a weekend break in Edinburgh, eschewing the cheap flights to Scotland in favor of the train journey north.

Long-term, the couple hope to one day travel from the UK to Japan via the Trans-Siberian Railway.

However while Wolf is keen to avoid flying, she’s not ruling out ever stepping on board a plane again.

She’s half-British, half-American, and has family in the US.

“I’m still very keen on travel, I still will travel, I will just use alternative means”

“When I was younger, I used to go about five times a year to New York, whereas now I think I’d be happy to go every five years for an essential reason,” Wolf explains.

Right now, Wolf thinks it would be acceptable to travel by plane to see them every half decade or so. She’d also fly in the event of an emergency. But she won’t be flying for leisure again.

“I think it’s a privilege thing, and I think that I wouldn’t expect people to do it if they hadn’t seen the world,” she says. “I’m very lucky to have done the bucket list thing at my age.”

Wolf also understands the appeal of low cost airfares over pricey trains, suggesting there needs to be a broader overhaul of travel costs.

She’s also aware that as a self-employed person, it’s easier for her to take the “long route” on vacation, and suggests there should be government-backed incentives to encourage people to travel by rail.

“Obviously if you’re going to France by train [from the UK], it’s a day each way for the travel, whereas if you fly, it’s a bit different. So I think we’d be interested to see things like incentives in salary jobs, where you get more annual leave, if you can evidence that you’re taking a low carbon option.”

While Wolf doesn’t expect everyone to follow in her footsteps, she does tag her travel photos with #flightfree. She wants to “participate in that dialogue” and show people how easy it is to travel from the UK to Europe — and beyond — by rail.

Travelers across the globe have committed to becoming flight free for 2022 and beyond.

Flight Free UK was inspired by the Swedish “Flygfritt” (flight-free) movement, which grew in prominence in 2019, around the time the Swedish term “flygskam” (flight-shaming) entered common parlance. Flight Free UK encourages people to sign a pledge to remain flight-free, as Wolf did.

The campaign group is also part of Stay Grounded, a global network of organizations founded in 2016 to encourage a move away from air travel.

While Flygfritt may have become more talked about in the last five years, for Flight Free UK director Anna Hughes, shunning flying isn’t a new phenomenon: Hughes took her last ever flight 12 years ago.

“I have done so many flight-free adventures and lots of very exciting travel without flying that I don’t feel that I’m missing out in the slightest, I don’t see it as a sacrifice, I see it as a positive aspect of my lifestyle,” Hughes tells CNN Travel.

It was the 2018 IPCC report and its stark findings that prompted Hughes to become more vocal about her commitment to avoid aviation.

“I decided that it wasn’t good enough just to be doing my own thing, I needed to encourage lots of other people to do the same.”

How successful Hughes’ campaign has been is hard to judge, she admits, due to the context of the Covid-19 pandemic — Flight Free UK only launched in 2019.

The impact of Covid-19 on the flight-free movement is also hard to quantify, says Hughes. But as she starts to encourage people to pledge for 2022, she says there are “two distinct camps” of travelers.

Hughes and her team are trying to celebrate and promote the idea of the return of conscious decision-making around travel.

“Covid has removed our choice this year, we have been forced to stay grounded because of the pandemic,” says Hughes.

“Going forward in the future, could we make these decisions through choice? When travel opens up again, can we make a free choice to explore in other ways? Because the climate crisis is as big a crisis as the pandemic, if not more.”

Hughes also supports change coming from above — she’s in favor of a tax on aviation fuel to clamp down on cheap flights.

And while Hughes is skeptical about concrete change concerning aviation coming out of COP26, she does think individual action could lead to a broader industry and government shift.

Hughes makes the comparison with the increasing omnipresence of veganism in the UK.

Hughes became a vegan around the time she swore off flying. A decade ago, she says she’d receive blank looks when she asked restaurants about their vegan options.

“If enough people do it, if customer patterns kind of shift, then industry responds.”

Dan Castrigano, of Flight Free USA, tells CNN Travel that the American movement is smaller than its European counterparts, hampered by a lack of train infrastructure in the US.

But while rejecting aviation when traveling domestically in the US might be harder, some Americans are still trying to make it work.

Betsy Thagard, 59, recently traveled from California to Chicago to visit family, and made the trip largely by rail.

“Two years ago is when I first declared I would be flight free,” says Thagard. “Then, of course, we couldn’t travel anywhere for 18 months, because of Covid. So this trip that I’m in the middle of was the first one I’ve taken since I made that declaration.”

While switching from plane to rail meant a longer journey, and more planning, Thagard says she’s enjoyed seeing the US by train.

“I’ve been flying back and forth to see [my family] for decades now, and so deciding to go flight free meant a real change of life for me, but I love it.”

However Thagard says she had to do one leg of the journey by plane.

“There was only one train that went from Charlotte [in North Carolina] to Birmingham [in Alabama] and it left at three o’clock in the morning,” she says.

Thagard didn’t feel comfortable waiting alone at a train station at that time.

“So I had to fly that one leg, and that was very disappointing,” she says.

It’s for this reason that Thagard hopes that the US government will expand the country’s railway network to make avoiding airplanes easier.

A Eurostar train traveling through England towards France.

While Thagard traveled a lot when she was younger, she says there are some destinations she’s not visited, and she says she may now struggle to see these places, given her commitment to being flight free.

Thagard says this makes her a little sad, but she’s ready to appreciate the beauty of California, where she lives, and the surrounding western states.

“I’ve got all kinds of places I can go in the west of the United States that are just as beautiful as anywhere in the world. So it makes you start focusing on your local places — what can we do to keep our local places beautiful — instead of having to fly somewhere else, to see someone else’s beautiful local place.”

Plus, Prague might not be out of the question. When Johnson retires, she hopes to travel across the Atlantic on the Queen Mary 2, and then explore Europe by rail.

Like Wolf in the UK, Thagard is aware that it’s a privilege to be able to take your time traveling by rail or boat — she’s also self-employed and able to manage her own time.

But Thagard wants to encourage others whose jobs and lifestyle allow it to embrace slow travel.

“The journey, the getting from here to there, is part of the pleasure of the trip. It’s not just this unpleasant step you have to take in order to arrive somewhere else,” she says.

“It’s important to get out there that it’s fun.”

Fresh Take: Modern Agriculture’s House Of Cards, Inside California’s Controversial Prop 13, And Why Private Label Is Having A Moment
Vermont ski resort to change ‘insensitive’ name
Could you land a plane in an emergency?
Delta offers free flight changes over July Fourth weekend ahead of possible ‘operational challenges’
Here’s The Latest Data On Climate And Food And It’s Not Good