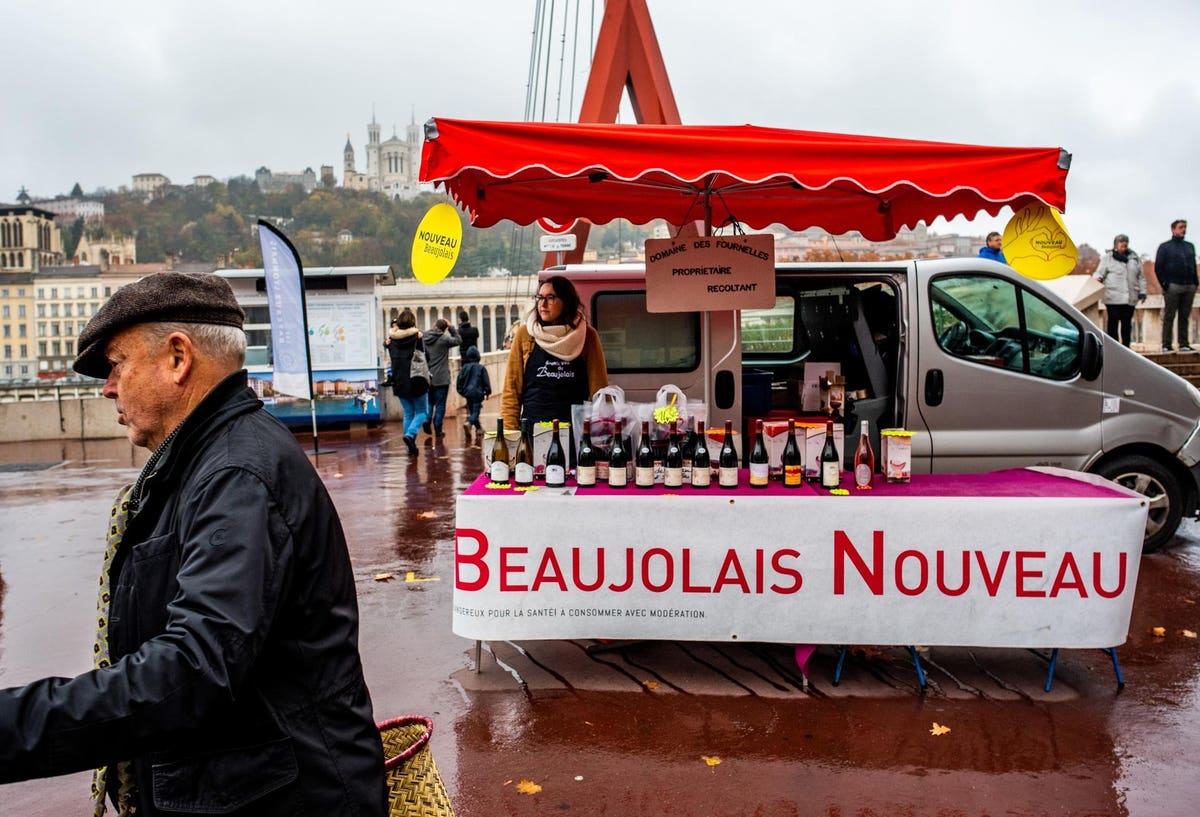 Beaujolais Nouveau, the celebratory first wine of the vintage, elicits a frenzy of immediate consumption on the day it is released. But in a season when many deliveries aren’t running on schedule, 2021 could be the year that Nouveau enjoys a spot on the winter holiday table, and why not?

According to Romain Teyteau, export director for the Beaujolais icon Georges Duboeuf, the tradition of bottling a part of the production just after harvest — and drinking it in celebration — is not exclusive to Beaujolais. However, this is the region that brought international fame to the moment when “Le Beaujolais Nouveau est arrivé!”

Georges Duboeuf is largely responsible for magnifying what was once local excitement to the world, which now includes street parties, concerts, and festive gatherings in villages and cities all over the globe. Wine shops, bars, and restaurants offer special pairings and events, and everyone has fun with the camaraderie and sense of excitement.

“The Beaujolais Nouveau tradition really found its legs in France in the 1950s and 60s, when distributors began to compete in a race to be the first to supply Beaujolais Nouveau to Paris bistros,” says Teyteau. “It became so popular that people would gather in bars and restaurants waiting for the wine to be delivered.” The excitement got a bureaucratic stamp when a French decree in 1985 made the third Thursday in November the official release date for Nouveau.

While the Duboeuf team expects its Beaujolais Nouveau to be available to consumers in the United States in time for Beaujolais Day — this year on Thursday, November 18 — there is a reasonable chance that delays in the supply chain may slow down some of the wine coming from France. It was harvested only weeks ago, after all.

In a conversation earlier this fall, Ghislaine Dupeuble of Domaine Dupeuble in Le Breuil, noted that the time from “bottling to drinking is short” and if transportation from France to United States is delayed at the port, it could mean “Beaujolais Nouveau for Christmas” which isn’t a bad thing at all.

In fact, this style of wine is adaptable for Thanksgiving, winter holiday meals, and cocktail party sipping. “Beaujolais Nouveau will be as delicious a few weeks or months after the official Nouveau Day,” says Teyteau. “In some vintages, you’d be surprised how well the wine shows even after a year or two of cellaring.”

Beaujolais and Beaujolais-Villages are crafted in both red and rosé, all made with Gamay, the region’s signature variety. According to the Beaujolais Wine Council, the category accounts for 20% of Beaujolais vineyard production and over 160,000 hectoliters (16M liters) are consumed annually.

Duboeuf Beaujolais Nouveau is a representation of the crowd-pleasing nature of this category — “fresh, fruity, and flavorful” according to Teyteau, calling it a “whole meal delight” for the holiday season. Because it offers balanced acidity and a fruit-forward nature, it pairs well with a range of foods from roasted poultry to caramelized veggies to cheeses and even mild desserts.

Teyteau says that Georges Duboeuf Beaujolais Nouveau has been delivered to the United States for an uninterrupted 40 years “rain or shine” including 2020, the year the pandemic severely limited social gatherings. People celebrated at home instead, and he says that the enthusiasm for this unique wine and the parallel celebration “outpaced” the doldrums of the pandemic.

“People came together to celebrate life and loved ones, and that is exactly what Beaujolais Nouveau is all about,” says Teyteau. “This year we hope to continue to bring joy and happiness through wine, whether your gathering consists of two or two hundred!”