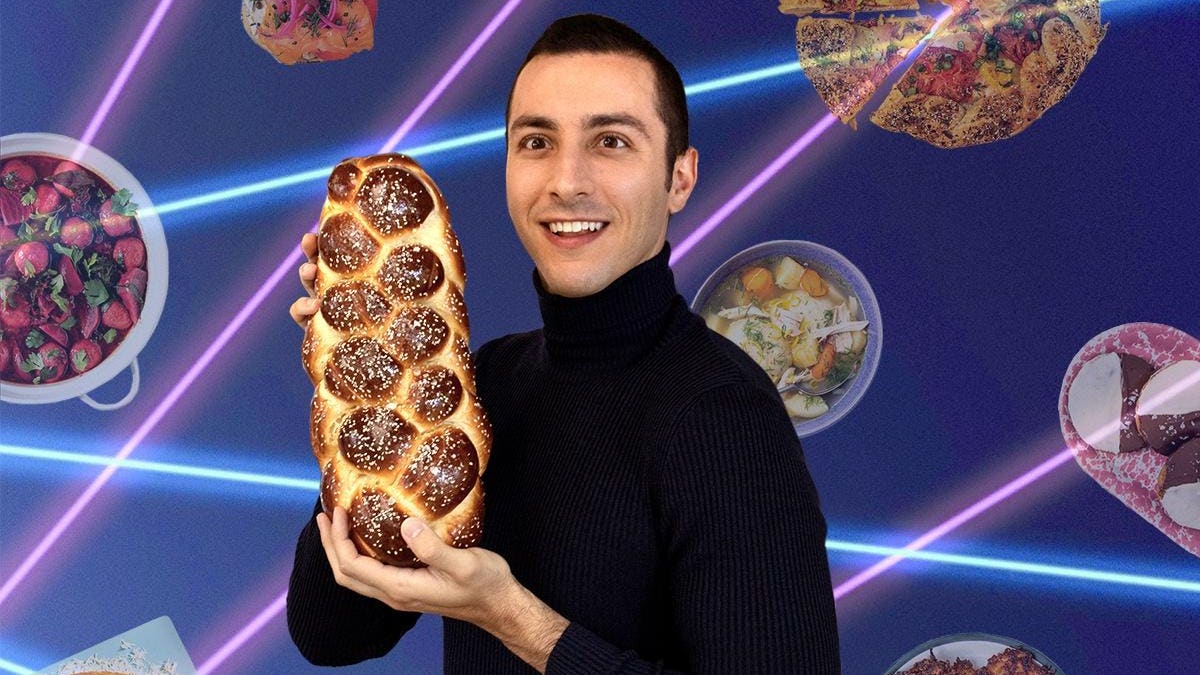 Since his first cookbook debuted and hit bestseller lists in March, culinary content creator Jake Cohen has also been amplifying his other main passion: cannabis.

In between roles as a recipe tester for Saveur Magazine, food editor of Tasting Table and food critic for Time Out New York, Cohen turned into a social media sensation when he started sharing what he was up to in his own kitchen with his Persian-Iraqi husband, Alex Shapiro. The couple was inspired by OneTable, a national nonprofit that encourages millennial Jews to practice the Shabbat dinner tradition they are both now board members).

“[Alex] had never heard of babka or gefilte fish,” Cohen told Jewish Journal earlier this year. “All of a sudden, I realized Jewish food cannot be defined by one section of a Jewish community … It completely shook up everything I knew about food in a secular sense. It made me reevaluate what that meant as a Jew struggling with identity. We began to explore that through Shabbat.”

Mesmerizing challah-braiding videos and tantalizing photos of new twists on traditional Jewish food (in preparation for the dinner parties they started hosting every Friday night) helped score Cohen a book deal from Houghton Mifflin Harcourt, which published JEW-ISH: A COOKBOOK: Reinvented Recipes from a Modern Mensch.

Since then, Cohen, 27 and a Culinary Institute of America alumni, left his latest post as feedfeed’s editorial and test kitchen director to build “Wake and Jake” full-time, while opening up about his own cannabis use along the way (his signature L’Chaim tie-dye tee is merch from the hilarious Instagram meme account Tokin’ Jew).

The brilliant brand name, for now, is his website address and LLC name, of which Cohen told me: “It plays off my love of weed obviously, but also the fact that ‘Jake’ replaces bake, which is part of what I do … and it rhymes. And who knows what that will lead to within the cannabis world. We’ll see in 2023 when things start to change in New York.”

Just in time for Hanukkah, I had a wake and bake phone sesh with the self-proclaimed “NJB” (nice Jewish boy) on a recent morning to talk getting lit and his distaste for infused cooking (plus, snag a recipe from his holiday menu to share this season).

Jake Cohen: I was [in high school] and it was something that was pretty easy to connect [with] because I’ve always had a kind of a not good relationship with alcohol. I have a weak Jewish stomach, and it’s always just destroyed me and made me feel terrible. So I never really got the hype around it. But the second I started smoking weed, it was very immediate, like I thought, “This is the best thing in the world.”

Shapiro: How does cannabis play a role in your adult life now?

Cohen: I think it’s the ultimate de-stressor. [Being high] is a wonderful place to start from whenever you’re going anywhere creatively to have a little bit of calmness. I think it naturally brings out these hedonistic tendencies — I really just love where my mind wanders in the sense of creating things in the kitchen around what we’re craving in those moments that we typically often wouldn’t think about in a sober state.

Cohen: [I like to be high] in all scenarios. But yes, I do like to be high preparing food just because I want it to enjoy the full-blown effect by the time the meal is done. I just think that there’s something very meditative about the cooking process that being high helps accentuate.

Shapiro: Is cannabis-infused cooking something that you’re looking to expand into?

Cohen: No! I’m very adamantly against it … infused cooking … stupid. I want to be high and enjoy a beautiful meal. I don’t want to enjoy a beautiful meal and then be high 45 minutes later and be hungry all over again. But I think cannabis-infused luxury edibles are everything. That is the future. Small-batch brownies, cookies, gummies — that’s it. I think there are some really incredible players in the artisan edible business and that is where the attention needs to be — not infusing it into your appetizers, entrees and desserts.

Shapiro: Were you ever worried about being vocal about cannabis on social media?

Cohen: Not really. In terms of me sharing, it naturally came out the more it became normalized in the media. A huge part of it is that I live in New York, so once it was decriminalized here, then I went further. Once it became legalized, then it was like, “Okay, now I’ll really go hard.” It was never something I hid, I was just conscious of what I posted before — given that I was also working for other [mainstream media] outlets at the time. And once I went off on my own, it really also became something where it’s like, “What do I have to lose? Nothing.” Because guess what? It’s like, everyone is posting pictures holding their wine glasses and those cheers-ing boomerangs. This is no different.

Shapiro: You’re everywhere these days! What’s been the highlight of your cookbook press tour so far?

Cohen: [Being a bartender on] “Watch What Happens Live” was so much fun! I’ve been such a huge Bravo fan for my whole life! I started probably smoking weed about the same time I got into Bravo as a teenager, so those two things have grown exponentially in tandem for me. After that, cooking with Drew Barrymore and Rachael Ray [on their shows] and getting to bake challah with Katie Couric in her apartment — having so many people celebrate the book, support it and cook from it is beyond incredible.

I’m not a huge snacker. I can restrain myself against a bag of potato chips or a bowl of popcorn, but put some Chex mix near me and I lose all control. There is just something about its combo of textures that gives me life. So, I figured I might as well throw some chicken fat on it and call it a day. I toss this snack mix with rendered schmaltz, fresh thyme, dried spices, garlic, and lemon zest before baking it low and slow until it’s crisp and addictively salty/greasy.

While this munchie is perfectly good for anytime noshing, it’s one of my favorite things to make the day before I host Shabbat, so I can put out a giant bowl of it when my guests arrive (it’s also always better the day after you make it). It buys me a bit more time to put the finishing touches on dinner, while I enjoy my own private snack bowl.

My only disclaimer is about the pretzels. To this day, I pick out all the pretzels from store-bought Chex mix. Why? Because they are inferior to all three kinds of Chex and the mighty bagel chips used in the mix. However, I’ve found that gluten-free pretzels are absolutely incredible in this recipe. I don’t know why, you’re just going to have to trust me on this one! — Jake Cohen

Excerpted from JEW-ISH: A COOKBOOK: Reinvented Recipes from a Modern Mensch © 2021 by Jake Cohen. Photography © 2021 by Matt Taylor-Gross. Reproduced by permission of Houghton Mifflin Harcourt. All rights reserved.

Duty-Free Retail Continues To Attract Highly Coveted Scotch Whiskies—And Set Records
The Delevingne Sisters On Prosecco, Pandemics And Pink Drinks
Lufthansa is bringing back the A380
Your 70s is the best decade of your life – meet the women who prove it
Six Perfect American Wines To Bring To A Summer Party.