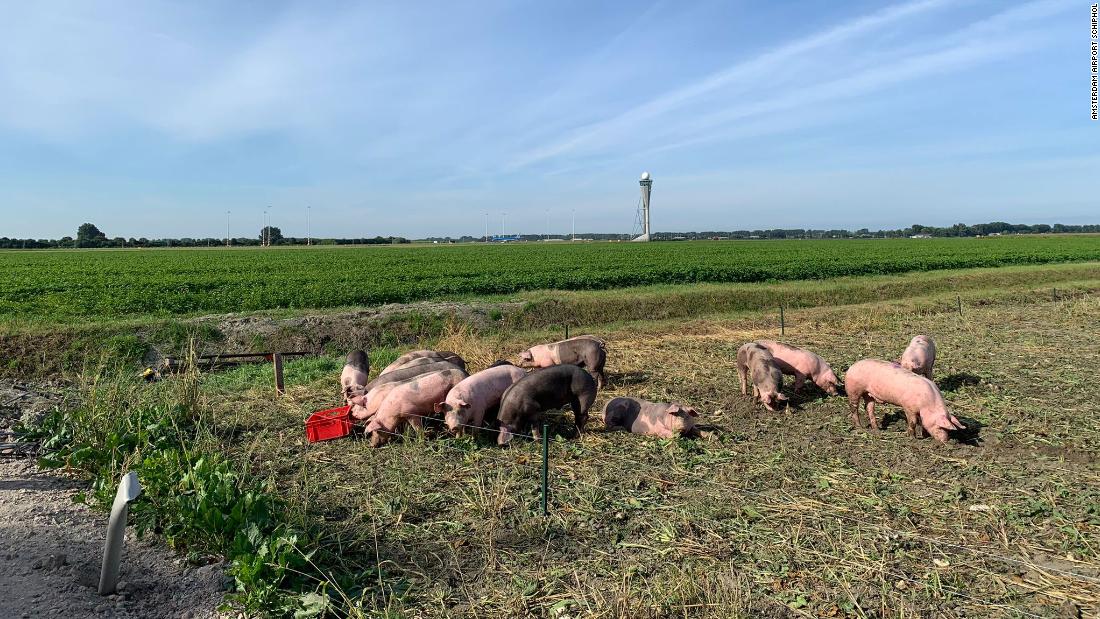 (CNN) — Pigs may not actually fly, but they might have a role to play in keeping air travel safe.

Amsterdam’s Schiphol Airport has employed 20 of the animals as part of a pilot project aiming to reduce the number of bird strikes on aircraft.

Collisions between aircraft and larger birds, such as geese, can pose serious danger, particularly if the animals are sucked into the engines.

The airport saw around 150 bird strikes in 2020, Schiphol spokeswoman Willemeike Koster told CNN on Wednesday, and the pig pilot is one of several measures the airport is taking to try to bring the number down.

The pilot involved pigs foraging on a five-acre plot where sugar beets had recently been harvested in between two runways, the airport said in a press release announcing the project in September.

The pigs were provided by Buitengewone Varkens, a small pig-farming company that raises the animals outdoors.

Schiphol airport approached the company and asked if the pigs would be able to come and eat the crop leftovers, which attract geese and other birds, co-owner Stan Gloudemans told CNN on Wednesday.

The first benefit is that the pigs help to make the area less attractive to birds by removing a source of food, Gloudemans said.

A second benefit is the fact that, as meat eaters, pigs will also try to catch geese that land in the field to rest, he added.

While the pigs can’t move fast enough to actually catch the geese, their attempts to do so mean they act like living scarecrows and frighten the birds away, he said.

Gloudemans’ farm produces around 300 piglets a year. They are normally deployed around the Netherlands to clear weeds or crop leftovers from harvests, rather than as part of aircraft safety measures, he said.

“This was the most strange question,” said Gloudemans, adding: “Next time maybe they’ll ask me to keep thieves away or something.”

Schiphol Airport said the project’s success will be measured by analyzing bird activity in the area during the time the pigs were present, compared with when they were not.

The airport already employs 20 bird controllers who work around the clock to keep birds away, using technology such as laser beams and sounds. It also plants special types of grass to make the area “as unappealing as possible for birds,” said Koster.

The six-week pilot project ended in the first week of November, Koster said, adding that it was “informative.” The data collected will be examined in the coming months, and a decision on the longer-term use of pigs is expected early next year, she said.

The Other Black Friday: Do Your Part To Put Hunger Relief In The Black
The best accommodation in Passo Tonale
F1 Star Fernando Alonso Lives the Sunreef Eco Life
Holiday Gift Guide: The Best New Scotch Whisky Of 2022
The best restaurants in Wengen