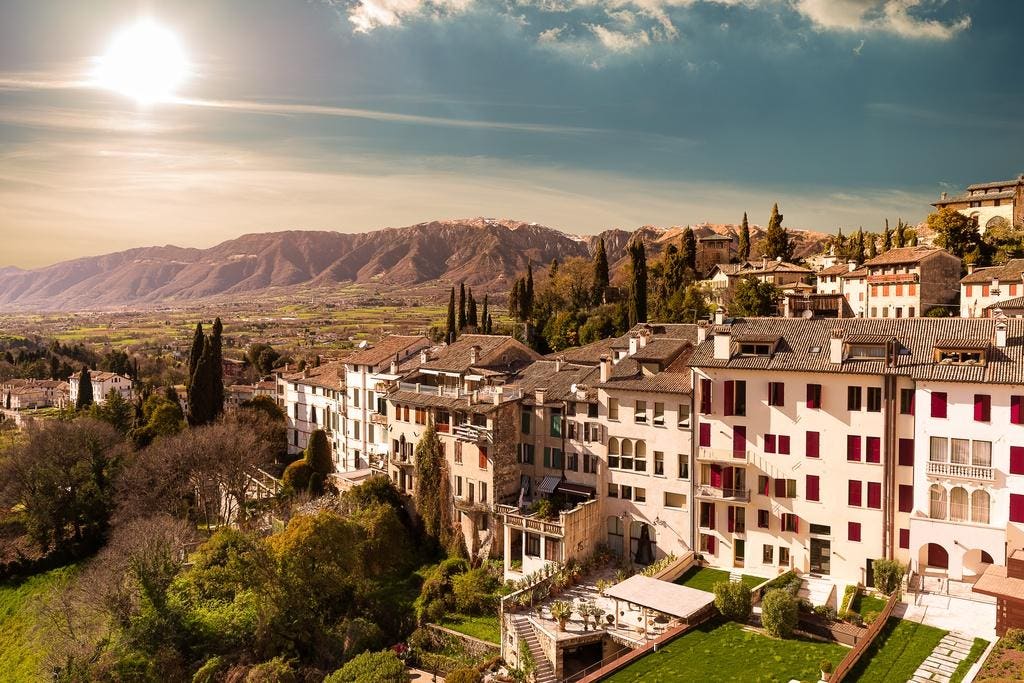 The charming hamlet of Asolo, in the province of Treviso, Italy, is only about 50 miles from Venice by car. You might ask why would anyone choose to leave Venice, one of the most alluring tourist destinations in the world, and head to Asolo? Here’s why:

Although there is only one Venice, this tiny medieval town at the foothills of the Dolomite Mountains is considered among the most beautiful borghi of Italy—with opportunities for walking, hiking, and exploration outdoors. Surrounded by old walls, stone gates, villas, and ruins from centuries before, the town offers landscape views so breathtaking that it has been dubbed “The City of One Hundred Horizons.”

Unvarnished by the mass tourism that has plagued Venice, Asolo offers an authenticity, soulfulness, and romantic ambiance that once attracted poets and artists to make the town their home—including English poet Robert Browning, violinist Wilma Neruda, and English travel writer and adventurer, Freya Stark.

The ruins of the Rocca, perched upon the summit of Monte Ricco, are a reminder of the pivotal role the fortress played in protecting the town. In the compact, very walkable downtown area, narrow streets and alleys lead to Piazza Garibaldi, the main piazza and center of life with shops and eateries nearby. The Palazzo Beltramini now houses Asolo’s Town Hall; the Palazzo della Ragione, its civic museum. The town’s frescoed medieval cathedral was renovated during the 18th century.

Because of its rich mix of history, art, and architecture, Asolo has been called “The Pearl of the Province of Treviso” and was also named one of 23 Italian cities in the running for the 2024 European Capital of Culture.

Asolo Prosecco: A sparkling wine with a unique personality

Those who like sparkling wines will find themselves at the epicenter of the lesser-known Asolo Prosecco DOCG area (until 2014, known as Colli Asolani) where these sparkling drinks will awaken the senses.

This nearly 5000-acre, biodiverse wine-growing area lies between flatlands and the Alps, covering seven hills on the right bank of the Piave River at the foot of Monte Grappa. The terroir is characterized by clay soil, numerous streams and rivers, abundant sunshine, and a balanced distribution of rain throughout the year.

All Proseccos, including Asolo, are made with at least 85% Glera grapes. The rest of the blend is made up of no more than 15% of Bianchetta Trevigiana, Perera, Verdiso, Pinot Bianco, Pinot Grigio, Pinot Nero, and/or Chardonnay grapes.

These delicious, pale to bright straw-yellow wines are made using the Charmat method (developed by Italian Federico Martinotti) with the economical second fermentation taking place in pressurized steel tanks, rather than in individual bottles.

The bouquets of the wine are delicate with white blossoms and herbs, along with subtle hints of fresh fruits like apples and pears. Because of the clay soil, the tastes tend to have mineral rather than fruity tones. A versatile wine, it can be enjoyed as an aperitivo, throughout a meal, and for special occasions.

Designated as a DOCG appellation in 2009, the Consorzio Asolo Prosecco, a group of 400 growers, 44 winemakers, and 37 bottlers, has spearheaded efforts to enhance, protect and promote Asolo Prosecco, with an emphasis on sustainability. An industry publication notes the rapid growth of the appellation, in terms of both production and popularity. During the 2020 financial year (during the pandemic), it produced a record 19 million bottles, followed by a 25% increase during the first half of 2021.

Compared to other sparklers like Champagne and Franciacorta, Asolo Prosecco couples high quality along with affordability.

One unique way to experience sparkling Asolo Prosecco is with a meal at the elegant 5-star Hotel Villa Cipriani, located just a stone’s throw away from the center of town.

The intimate, 28-room property (with 6 suites) was once a country estate. Exquisitely renovated and decorated, it has become a discreet getaway for royalty and celebrities as well as food and wine enthusiasts.

Order a Bellini or a simple glass of Asolo Prosecco in its terroir, paired with traditional regional and Mediterranean dishes from the changing seasonal menu—while soaking in the majestic views of the Asolo Valley and Monte Grappa. The hotel can also arrange an Asolo Prosecco wine-tasting experience.

You may just want to linger in Asolo sipping Prosecco, overnight or longer.

Next best option: If you can’t make it to Veneto, purchase a few bottles of Asolo Prosecco from your local wine merchant and organize a holiday tasting.