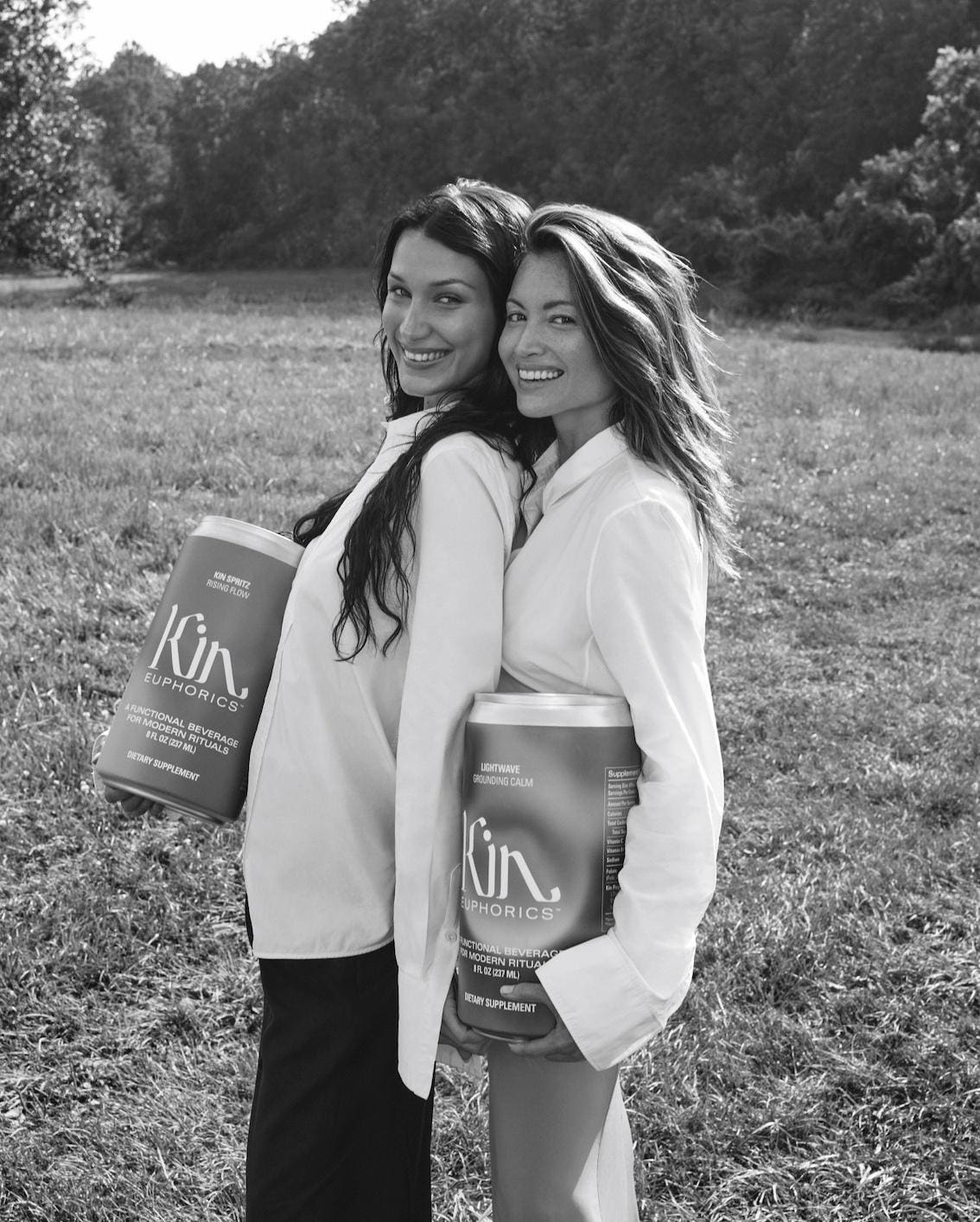 The earliest evidence of wine production dates back millennia, the use of alcohol as medicine was first mentioned in Sumerian and Egyptian texts from circa 2100 B.C. It is certainly no secret, humans across the globe have imbibed in different forms for centuries. Now, we are going through yet another evolution of alcohol consumption.

In the American social and often professional world, getting drinks among friends and colleagues has been understood as a means for maintaining relations, a way to further connect. But younger generations are becoming turned off by alcohol and the market tide is shifting.

Leading no-abv spirits brand, Kin Euphorics, is at the forefront of this cultural shift offering an empowering alternative for the ‘Generation Dry’. Kin first launched in 2018 as the first Euphoric to enter the market. By way of an expert combination of adaptogens, nootropics, and botanics, Kin Co-Founders, Jen Batchelor and Bella Hadid, have created a drink that not only elevates your mood but also supports brain health, something entirely new to the drink category.

“I asked myself how can we give people that sense of relaxation through the mechanism, the parts of our body, the gut-brain access that affects mood rather than inducing it in a way that is very very detrimental to our body,” says Batchelor.

“We never seem to ask ourselves how alcohol is affecting our brains. And that’s the big leap and the big bet that we made early on that still hasn’t been connected in a mass way. But when I was surveying people to ask why they drink and why they want to moderate their drinking the number one reason everyone was talking about was for their liver. And I’m like right, but what’s being affected first? When you get drunk – it’s the mind that’s being affected. It’s the adrenals, it’s the hormone imbalance that is getting completely rocked to give you this sense of relaxation.”

Between 2002 and 2018, the number of adults aged 18-22 in the U.S. who abstained from alcohol increased from 20% to 28% for those in college and from about 24% to 30% for those not in school, say researchers at the University of Michigan and Texas State University. Alcohol abuse among both groups decreased by roughly half according to the same study.

But when Batchelor originally came up with the idea for Kin, it “really came from me wanting to scratch my own itch. I share a lot of the same interests and the same pain points as the modern drinker today. Why are millennials drinking less? It’s because they’ve been there. They’ve had too much and now they are coming out the gate saying alcohol is kind of gauche and they say they don’t want to be drunk, it’s lame.”

In researching to better understand the younger consumers desire for an alt drink, Batchelor found that “what our research really shows is that so many people associate alcohol with poisoning yourself in the more extreme cases and then we have more people who consider themselves mindful drinkers. They don’t want to be the drunk person at a party, they don’t want to waste their time which is the ultimate currency today. They want to wake up and have full autonomy of their day and not be hungover.”

Before developing Kin in 2018, Jen was living the NYC grind, “I had a crazy schedule running a business, having a side hustle and I was studying Ayurveda at the same time I started noodling on this. I thought man, why isn’t there a smart alternative that makes me feel like I’m doing something great for myself?” she said.

With the rising interest in wellness from slow food to beauty, fashion, and skincare, it is clear people are becoming increasingly mindful about what they put into their bodies. “I think now we are getting too smart for a mocktail cocktail alone that has 40 grams of sugar, that you will pay 20 bucks for. People are learning more and more about wellness,” said Batchelor.

Kin acts as a sort of social lubricant that won’t get you drunk or hungover as it does not contain alcohol but still offers relaxation or energy and responsibly helps one let loose. Lightwave promotes relaxation while Kin Spritz promotes energy. Kin Spritz is infused with notes of ginger, bitters, and citrus to stimulate focus and energy. While the Lightwave flavor profile combines lavender- vanilla, birch, and smoked sea salts. The euphoric properties come from its active ingredients of Reishi Mushroom, saffron, L-Tryptophan. And although responses to Kin differ, many consumers report having a sense of calm, clearer thinking making the social connection more fluid.

Both Batchelor and Hadid’s very different backgrounds lend to making a collaborative team for growing Kin. Batchelor used to live in Saudi Arabia, and among the expats, alcohol was often the connector, she grew up with the social drink acting as a connector which inspired the creation of Kin.

“It was the thing that brought us, expats, all together. Whether you were Australian, American or Lebanese, we all sort of came around these traditions that were primitive to us. My father became this community gatherer as he would distill alcohol and make moonshine, he became known for this. So, I saw and experienced the disparity between the ritual that was preserved in this ancient type of community building and sharing a drink with someone versus what I saw when I moved to the States which was using alcohol to cope. It was less about enjoyment; I saw what was initially intended to be medicine, because if you go back to the history of alcohol you understand that. They were herbal wines for a reason, medicinal wines for a reason. They were seen as a balm to society, something that helps you connect with the divine, to help you digest your food,” says Batchelor.

“I wanted to reconnect to what the original intent of these tonics was,” she says.

Hadid’s initial introduction to Kin was as a lover and consumer of it. The drink was placed in her fridge by a friend who knew she loved all things wellness. “The universe placed it there,” she told Vogue. Especially when you think of her massive modeling career success which often means long workdays, a jet lag-ridden globe-trotting schedule, an incredibly exciting life that also tethers on burnout. Add that on top of her Lyme disease which Hadid has said on social media still leaves her with side effects like brain fog and exhaustion as well as her social anxiety. She says, Kin offered her a remedy.

The drink has ingredients like GABA, a naturally occurring nootropic chemical that helps with relaxation, and tyrosine a mood enhancer. She hoped that maybe, the drink could help mellow her anxiety, relax and help her to have fun.

“She has so many amazing ideas on how to expand on that original concept, so it’s been amazing. She is a true partner, a true co-conspirator day in and day out. And works her ass off,” says Batchelor.

Hadid has a meaningful role with Kin, collaborating with Batchelor to run branding, social initiatives, and formulation. Kin drinks will soon contain lavender grown on the Hadid family farm in Pennsylvania.

Mackenzie Connelly, of Endeavor, who helped broker the deal between Kin and Hadid talks about the changing drinking culture and why this is the next frontier of drinking, “In terms of the functional beverage market, rates of binge drinking are decreasing while the number of people identifying as non-drinkers is increasing especially among that 21-34-year-old age group. And we believe that beverages that are not only non-alcoholic but also those that provide tangible functional benefits, be it sleep aid or social anxiety or improved energy – will disrupt drinking culture.”

The youth of today have spoken and Kin is listening.