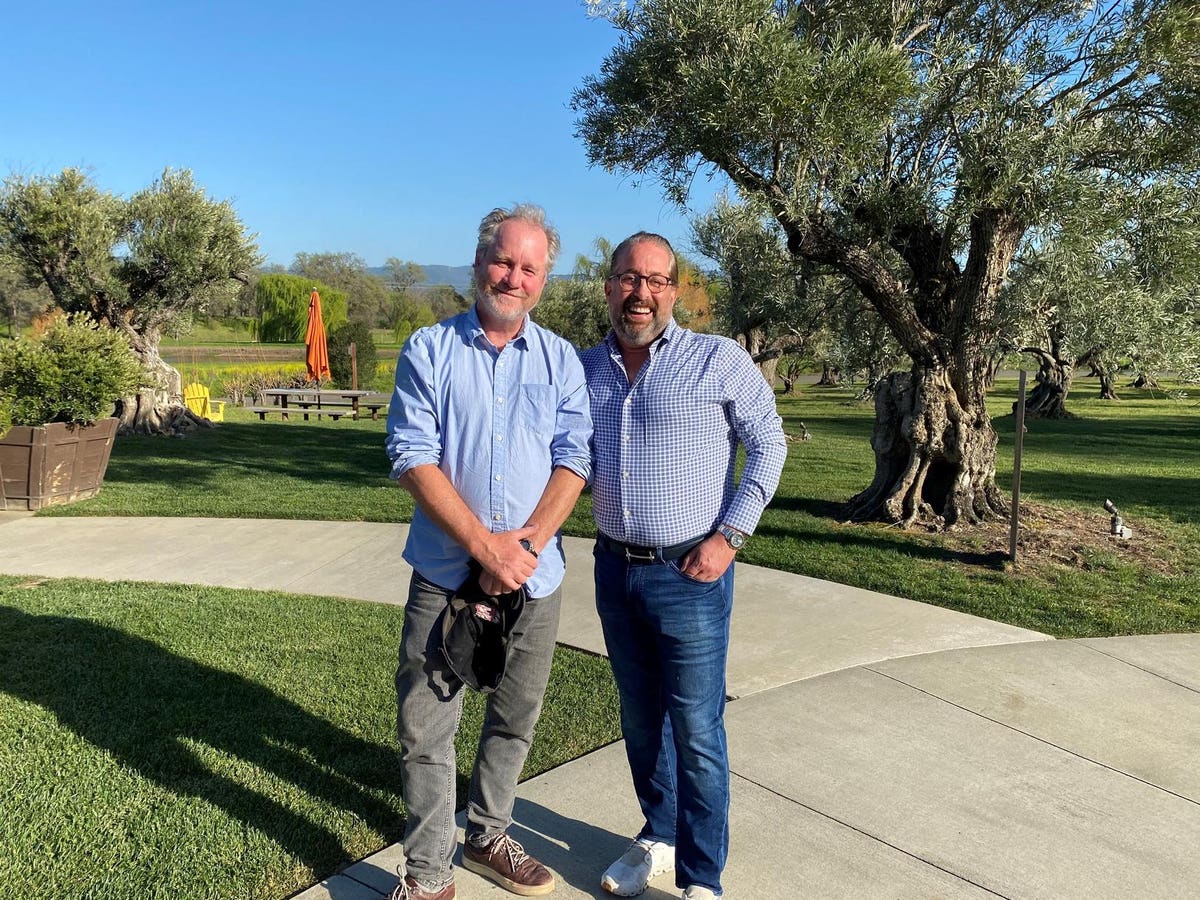 Marc D. Taub, the President and CEO of sister organizations Palm Bay International and Taub Family Selections, is the third-generation proprietor of companies that are known in the wine business for their strong import portfolios with a focus on brands from Italy and France. While his late father, David, is credited with introducing Pinot Grigio to the United States in 1977, the younger Mr. Taub has expanded his family’s footprint to include a California wine label and the recent acquisition of a California wine estate.

Inspired by working with some of the wine world’s most iconic producers, Marc decided to apply some of the knowledge he has gained to becoming a vintner himself. He acquired Heritance in Napa Valley in 2014 and has since changed the name to Taub Family Vineyards. In Sonoma, Taub produces wine under the Au Contraire and Mon Frere labels. Most recently, in 2018 he purchased Saracina, a 400-acre estate near the Upper Russian River in Mendocino, just north of the Sonoma county border. In addition to grapevines, Saracina is also home to vegetable gardens, beehives, chickens, and 140-year-old olive trees.

Taub and his team are undertaking an extensive replanting of Saracina’s vineyards to make sure they are growing the varieties most ideally suited to the conditions of each individual plot. They presently have 100 acres of vineyard in varying stages of development. Approximately 17 acres are cultivated with mature Chardonnay, Zinfandel, Petite Sirah and Sangiovese. Another 14 acres that were replanted in 2020 bear Cabernet Sauvignon, Malbec, Petite Sirah and Petit Verdot, while five acres were replanted in 2021 with Zinfandel and Alicante Bouschet. Another 65 acres will be replanted in 2022 and beyond. It is worth noting that grapevines take at least four years to produce wine-worthy fruit, making this is a long-range project.

They have also invested in upgrading their winemaking and cellar operations and are planning out an expansion of the existing tasting room and hospitality programs. Saracina’s wine caves were dug out of rock over a two-year period, and they are the first of their kind in the county. The modern, eco-friendly winery and tasting room blend harmoniously into their bucolic surroundings.

Winemaker Alex MacGregor crafts a range of wines that run the gamut from easy-drinking whites such as Sauvignon Blanc and Chardonnay to sophisticated versions of Malbec, Cabernet Sauvignon, and a red blend called Winter’s Edge. Eleven different Saracina wines are made in small quantities that total 84,000 bottles per year. About 55% of the winery’s output is available via wine shops and online sites, while 30% is sold in restaurants. The remaining 15% is sold directly to consumers either online or via winery visits.

We recently caught up with Marc Taub to discuss the path that led to his adding the title vintner to his multilayered career and why he chose California.

World Wine Guys: What is your family history in the California wine industry prior to your purchase of Saracina?

Marc Taub: My family has always been based primarily in and around New York, but California has been interwoven with our story since the beginning. My grandfather Marty got his start in the spirit rectifying business soon after the repeal of Prohibition, and later transitioned into the distribution side when he founded Gallo Wine Distributors in New York. As you can guess, California was a large part of that portfolio! That was later renamed Premier Wine & Spirits of New York, to reflect the ever-expanding portfolio. Our family eventually sold Premier to Southern Wine & Spirits, as my father and I opted to set our focus exclusively on imported wine through Palm Bay International, our first import operation that was founded in 1977. Personally, I felt incredibly fortunate to grow up immersed in the amazing culture of wine and all the history, agriculture, and tradition that surrounds it. I was inspired by my dad and grandfather and wanted nothing more than to join them industry. But first, I had to cut my teeth elsewhere before joining the family business. That’s how, in the late 1980s, I wound up in a sales and distribution role while living in California, an experience that left a lasting impression on me. Though I later moved back to New York and eventually focused most of my energies on imports, the wines of California continued to intrigue me.

WWG: As a successful third generation wine importer, why was it important to you to make your own estate grown California wine?

MT: I grew up with a deep appreciation for the art of winemaking, and the camaraderie intrinsic to this fascinating world. I was truly inspired by my relationships with some of the world’s most iconic producers, and all that I had learned over the years of visiting their estates and bringing their wines to consumers in the US. I wanted to apply this knowledge directly, and for me California was the natural choice. In 2014, I acquired Heritance in Napa Valley, which is now called Taub Family Vineyards. For that label, we hold contracts with some of the most exciting vineyard sites and produce a selection of wines that I’m incredibly thrilled about. We also produce wines in Sonoma under the Au Contraire label, named for an expression my dad famously used quite often to change course when it seemed there was no easy solution to a challenge at hand. However, we did not yet have an estate that we could call our own.

WWG: Mendocino is less well known than its neighbors to the south, Sonoma and Napa. What drew you to this site?

MT: I knew that I wanted to have an estate of my own, a place where we could put our stake in the ground and set a course for future generations. I didn’t necessarily have Mendocino on my mind, but the stars aligned when I heard that John Fetzer and Patty Rock, previous owners of Saracina, were thinking of selling the ranch and vineyards they had tended for 20-plus years. I took a trip up to Hopland, California, which is just over the Sonoma County border, in the southern part of Mendocino County. This magical place took my breath away; I absolutely fell in love with the place, the team, and the wines.

WWG: Your import companies are known for their Italian wine portfolios. How does the landscape and topography at Saracina compare to vineyards in Italy?

MT: At times I feel like I’ve been transported to Tuscany when I’m at Saracina. The rolling hills and undulating landscape, peppered with 140-year-old olive trees and cypresses, remind me of my many visits to our partner wineries in Tuscany and beyond. In fact, Saracina was named for a place that John and Patty stayed during their honeymoon in Italy.

WWG: How active are you and your son Jake in the operations at Saracina?

MT: I am personally out at Saracina on a regular basis, meeting with the team and planning for the future. Since we purchased the ranch in 2018, we’ve initiated an extensive replanting of the vineyards to ensure that we are growing the varieties best suited to the conditions of each individual plot. At present, we have approximately 100 acres of vineyard in varying stages of development. We have also invested in upgrading our winemaking and cellar operations and are planning out an expansion of our existing tasting room and hospitality programs. It’s important to me to be hands-on in this process, collaborating with our talented on-site team throughout the development. We’ve also made some fun additions to the ranch, like a family of alpacas, many chickens, and organic gardens. I have so many ideas for the future here; it’s hard to keep me away. Jake, who is now Director of Business Development for our NY-based wholesale operation Independence Wine & Spirits, enjoys spending time at Saracina with the team when he can, and has been bringing some terrific ideas to the table. The future is as bright as the Mendocino sun!

FDA: Vidalia Onion Recall Due To Listeria Concerns Affects Wegmans, Publix, 5 States
Dufour 61: A Dynamic New Flagship Yacht
Fresh Take: Modern Agriculture’s House Of Cards, Inside California’s Controversial Prop 13, And Why Private Label Is Having A Moment
Your 70s is the best decade of your life – meet the women who prove it
Lufthansa is bringing back the A380