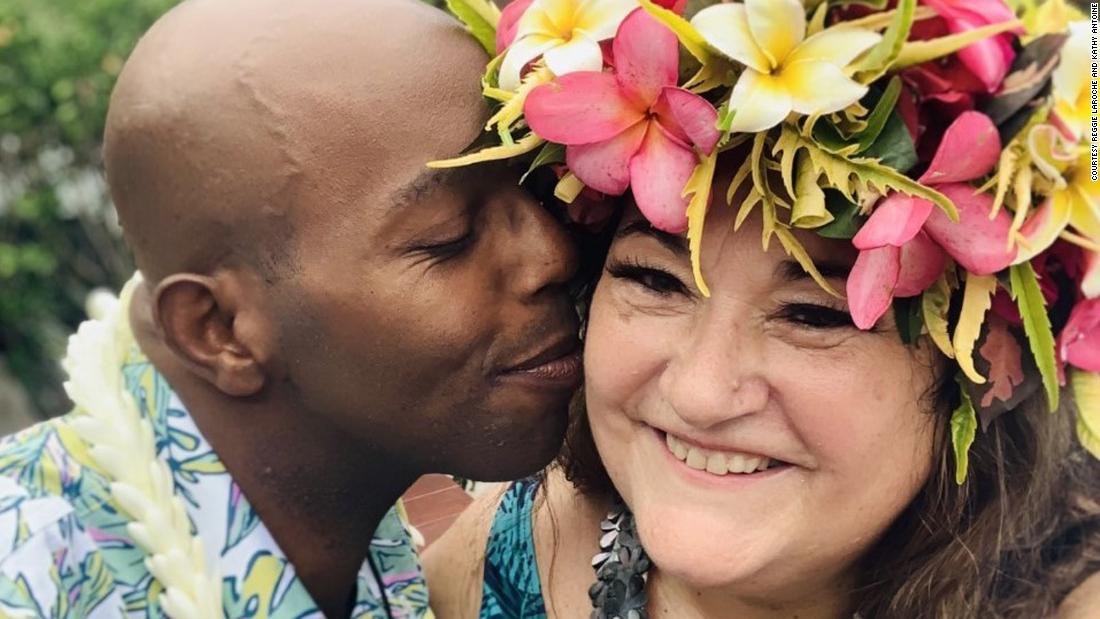 (CNN) — It was the early months of the Covid-19 pandemic, and Reggie Laroche, stuck in his Florida apartment, was struggling to stay optimistic.

Laroche’s job in television once took him around the globe. Now, he was confined to the same four walls, unsure what the future held.

The group had been set up by Amsterdam-based Barbara Duriau that March, when Covid restrictions first hit Europe.

Members were encouraged to upload photos of the views from their homes, accompanied by a short description of what they could see, where they were and how they were feeling.

When Laroche discovered the group, it felt like a glimmer of light in the darkness.

“The page was designed really to give people hope,” he tells CNN Travel today. “I found myself clicking through all the pictures and just feeling like for a moment I was traveling again.”

When Laroche discovered “View From My Window” it was May 2020. There were three months worth of window shots for him to scroll through. He could pore over snowy scenes from Switzerland, rooftop views from Italy and expansive landscapes in New Zealand.

But one photograph in particular caught his eye. A recent shot, taken from a front porch: blue sky, even bluer sea, framed by lush greenery.

It was uploaded by someone called Kathy Antoine, who’d captioned it with the location: Punaauia, Tahiti in French Polynesia. It was the view from her home office, overlooking Morrea Island, Antoine wrote. With a view like that, she added, working from home wasn’t too bad.

The previous year, Laroche had spent some time in Tahiti and fallen in love with the island. Antoine’s photo took him right back to that trip.

“I was instantly reminded of the beauty of the place, the people that I met, the food, everything,” he says now.

He kept coming back to the photo.

“I just immediately felt drawn to it,” he says.

He was so taken with the scene that merely liking the photo felt insufficient. He composed a message to this stranger.

“I really enjoyed your picture,” he wrote, and sent her a friend request.

Kathy Antoine posted this photograph of the view from her window in Tahiti in May 2020, capturing Florida-resident Reggie Laroche’s attention.

On the other side of the world, Kathy Antoine picked up Reggie Laroche’s message and considered how to reply.

A friend had originally pointed her towards “View From My Window,” and Antoine had joined the Facebook group right away.

She’d been inspired to upload her own photo, and had been pleased when her view had resonated, receiving some 15,000 likes.

While Antoine appreciated him reaching out, she wrote back explaining she wouldn’t be adding him as a Facebook friend.

But she didn’t delete the request. And in the months that followed, Facebook kept reminding her of Reggie Laroche, sending reminders and suggesting him as “someone you may know.”

Often, when she got these notifications, Antoine would check Laroche’s Facebook profile. His settings meant she could see his photos and posts, even though they weren’t officially connected.

Whenever she saw Antoine’s recent updates, she was intrigued.

“I really liked the sensitivity through the pictures he was posting,” she says today. “Lots of things could have been my posts, actually.”

Almost a year later, in April 2021, Antoine belatedly accepted Laroche’s friend request. The Facebook notification had popped up again, and she’d decided to hit the accept button. At that point, he didn’t seem like a stranger in the way he had the year before.

As for Laroche, Kathy Antoine and her stunning Tahitian view had receded from his mind. When he got the notification that she’d accepted his friend request, he was confused — and wondered if she was someone he’d met during his 2019 Tahiti trip.

He scrolled through her page, looking for clues, then saw her photo of that view, with the mountains, sea and sky. It clicked — she was the woman from “View From My Window.”

Now officially Facebook friends, Laroche and Antoine started liking and commenting on one another’s posts, with the occasional message.

“We started to communicate, just kind of friendly banter here and there over the next month or so,” is how Laroche puts it.

Antoine has lived in Tahiti for most of her life, but she has a house in southern California, and as summer 2021 started to unfold, journeying from French Polynesia to the US seemed to be on the cards for the first time in a while, so Antoine started planning a trip to the States.

She messaged Laroche, and discovering he was going to be in Los Angeles around the same time, suggested they could meet while she was over there.

Larcohe was the only one of Antoine’s Facebook connections that she’d never met in person, and she felt she should rectify that.

She also thought it would be fun to make a new friend, and from their social media interactions, felt sure she would get on well with Laroche.

Anotine and Laroche met for the first time in the Manchester Grand Hyatt hotel on San Diego bay in August 2021.

Antoine says she wasn’t nervous, as she had no real expectations. Laroche says he had some trepidation, mostly because he’d got so used to Zoom interactions, and the idea of meeting someone new, in person, felt a little surreal.

Laroche waited in the hotel lobby, looking out for Antoine. When an SUV pulled up with tinted windows, he wondered if he was about to see a celebrity guest check into the hotel.

When the car pulled away, he realized the car had actually dropped off Antoine — with a friend in tow.

The group said their hellos. Antoine and Laroche say they both felt at ease right away.

“Instantly, it was as if we were best friends,” says Laroche. “We started having a conversation, I felt completely comfortable with her.”

After these first introductions, Laroche, Antoine and Antoine’s friend headed to downtown San Diego. They checked out the historic USS Midway ship, before going out to dinner together.

As they wandered around the city, Laroche and Antoine chatted about their lives, and felt their instant bond solidify, although they weren’t sure where it would go.

“I was feeling that I had just met someone very special,” says Laroche. “But I wasn’t thinking yet that this was going to be a relationship, I wasn’t in that mindset.”

The next day, Laroche and Antoine met up again — this time, without Antoine’s friend.

Over Mexican food, and later as they wandered the streets of San Diego, their conversation continued and their connection deepened.

“It was really an amazing feeling of someone you just met, and you feel like you’ve known the person for a long time,” says Antoine.

Something had shifted, and they both felt it.

“I found myself just naturally holding her hand,” says Laroche.

Laroche was supposed to be leaving California the next day, but he postponed his flight. Antoine invited him to travel with her to her house in Palm Springs.

Antoine was to postpone his flight again a few days later. The two spent the rest of Antoine’s stay in the US together.

“I was attracted to him, to his soul,” says Antoine today.

“It quickly, quickly turned into something more than friendship because there was like a soul connection that was really, really amazing.”

When the time came for Antoine to fly back to Tahiti, the two knew they’d do everything they could to see one another again as soon as possible.

And indeed, only a few weeks later, Laroche was on a flight to Tahiti.

Reggie Laroche and Kathy Antoine are now a couple.

The two spent much of this past fall together in French Polynesia, with Laroche’s flexible work schedule allowing him to work from there.

“It’s been, in such a short period of time, transformational, beautiful,” he says of their relationship so far.

Their connection, the two say, is built on a deep respect for one another.

“Reggie is a fantastic person, he knows so many things — he’s traveled the world,” says Antoine. “He’s a very strong person, but at the same time he’s sensitive as well, and he’s very humble.”

“I feel like I’ve been traveling the seven seas, and looking for someone to share life with, and now I found her, and all this time she was hiding on a tiny little island in the middle of the South Pacific,” says Laroche.

Barbara Duriau, the creator of “View from my Window”, says Laroche and Antoine’s story is what makes the Facebook group she’s built so special.

Duriau is also grateful to have created something hopeful in a dark period. “Borders were closed, windows and minds were opened,” is how she puts it.

In recent months, Duriau has self-published two books, collating some stand-out posts and stories from the “View From My Window” community.

She always loves seeing the photos, Duriau says, but it’s what’s behind the view that stands out.

“Above all, it is the stories behind the pictures that touch me. They are funny or moving, and some give you goosebumps,” she says.

“Behind each photo is the story of an ordinary person, their vision of life. It’s just one person’s little corner of the world that finds its place in the big picture that is the planet.”

As well as Laroche and Antoine’s romance, Duriau says other friendships and connections have formed across continents via the group.

Her second book ends with the story of an American “View From My Window” member who was inspired to paint a view uploaded by a Frenchman in Dordogne, France, and in summer 2021 met him in person while on a French vacation.

Duriau hopes more people in the community may be able to meet when circumstances allow, and she’s planning a “View From My Window” exhibition in Brussels in 2022.

As for Laroche and Antoine’s future, they hope to split their time between the US and Tahiti.

For now, Laroche’s job affords him more flexibility to travel, so the couple are mostly spending time together in Tahiti. In the future, they say they’d love to explore the world together.

But the view from Antoine’s window in Punaauia will always have a special significance for them both.

In November 2021, Laroche posted his own photograph of the view to the Facebook group, this time with the sun setting over the ocean.

“When I went to Tahiti, one morning I looked out and I’m looking at the same view that had brought us together over a year and a half ago,” he says now. “And I was just thinking how blessed I am, that something that was so simple as the post has now brought me so much joy and happiness.”

Your 70s is the best decade of your life – meet the women who prove it
Why more air travel chaos is on its way
How Telegraph readers fell out of love with ‘rip-off’ Airbnb
Why now is the best time to book your next ski trip
Bella Hadid On Breaking Into The Business World, The Allure Of Kin Euphorics, And The Importance Of Female Leadership Post-Roe