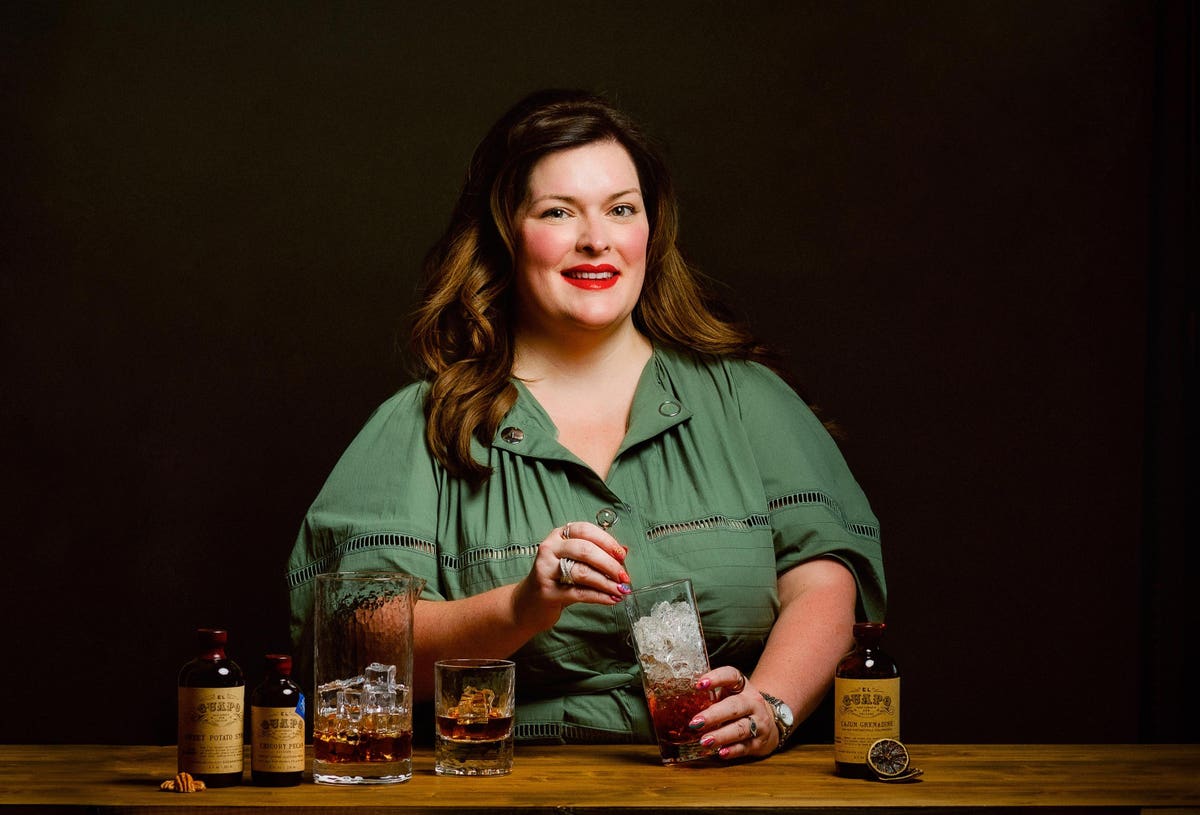 When storm clouds appear on the horizon, you need a firm hand on the tiller to keep the ship sailing straight. If not, it’s entirely possible to end up smashed on the rocks. Luckily for El Guapo Bitters & Syrups, a young startup company in New Orleans, they had the perfect person at the helm over these last few turbulent years. Now they are prepared to reap the rewards and take their brand national with the opening of America’s first bitters brewery.

The recent announcement by Christa Cotton, the founder and CEO of El Guapo Bitters & Syrups, of $1.1 million in seed funding was the culmination of eighteen months of intense stresses on the fledgling company. They went from contemplating bankruptcy at the beginning of the pandemic to being so inundated with orders that they have had to battle to keep up with demand.

Growing in Leesburg, Georgia (the hometown of country singer Luke Bryan), Cotton learned to love entrepreneurship at a young age. Her father, Alton Darby, built Victory Real Estate Investments, one of the Southeast’s largest privately-held commercial real estate companies. In 2005 after Hurricane Katrina, he decided to diversify and in 2009 opened the first and still only legal distillery in Georgia, Thirteenth Colony, an endeavor Cotton helped launch while still in college at Auburn.

The chance to purchase the El Guapo trademark appeared while working for an advertising and branding firm in New Orleans. After discussing it with her father, she decided to launch the company. She spent two years figuring out the recipes and brewing processes she would need to establish a line of products. Eschewing from traditional methods for creating bitters, she decided to go alcohol-free using natural ingredients sourced from local farms and businesses.

“We developed a proprietary process for brewing bitters that are alcohol-free, and that is the biggest differentiator between ourselves and the competition,” she says.” We also have built our supply chain from the ground up, and all of our suppliers are people that we know who supply us with the highest quality products we can find.”

Operating out of a 3,000 sq. ft facility, she landed a twenty-four-store supplier diversity rotation deal with Costco in Texas, Oklahoma, and Louisiana that was slated to begin in March of 2020. Then she received a call from the company telling her that they were canceling the order since they needed the floor space to stock up on toilet paper. At the same time, all of the bars she sold products to shut down across the country simultaneously. The company’s two primary sources of income disappeared.

She was contemplating filing for bankruptcy when she noticed that her website traffic was skyrocketing as people looked for drink recipes and products to make beverages from home. The company instantly pivoted. All efforts went into improving the website and maximizing e-commerce. Within weeks they went from 70% sales wholesale to 90% direct to consumer sales through the website and Amazon. In April 2020, their sales were up 882% over the year before, and the momentum continued, quickly depleting all the inventory they had accrued for their Costco order. To help with the blast of business, she hired furloughed chefs and hospitality workers to help fill the incoming flood of orders. The company tripled revenue in 2020.

But, all of the sudden growth made her feel like she was drowning and barely able to keep her head above water. So, she looked for help. In 2019 she had successfully gone through Goldman Sachs
10,000 Small Business Program and was in a Tory Burch Foundation Fellowship when the pandemic hit. The next logical step was to connect with more local contacts. She applied for and was accepted into The Idea Village’s entrepreneur accelerator program.

“I really wanted to grow this as a female entrepreneur, so I continually reached out and applied for programs that would equip me with the skills I would need to make that happen. Even ones that on the surface might not seem a fit,” she says. “When I was accepted into Idea Village, I was the only CPG company in the cohort; everyone else was a technology-based business.”

In Idea Village, she met one of her biggest mentors, Corey Tisdale, the co-founder of BBQGuys, the largest BBQ Grills and equipment seller on the internet. He helped her navigate the complex world of logistics and helped set her up for scalable growth. He also introduced her to the New Orleans Angels Investor Network and is the second-largest investor in El Guapo.

“When I met Christa, I was impressed by the fact that you can’t keep her down; nothing will stand in her way,” says Tisdale. “That combined with the fact that she is very intentional about her product with a defined vision of where she wants to head and her intense desire to be a part of growing the economy here in New Orleans was ideal for me. I knew that I wanted to invest in her company.”

The recent funding round will allow El Guapo to position itself to deal with its sudden increase in business and set up a platform to scale the already profitable business. They are building a state-of-the-art bitters brewing operation inside a 35,000-sq ft building in New Orleans that will be operational in 2022 (they will occupy 16,000 sq. ft with the option to expand as needed). The company also has focused on enhancing the online experience for its customers. It’s working. Site views have grown from 2,560 in 2019 to over 90,000 so far in 2021.

The long-term goal for the company is to build it into an attractive acquisition target down the line, and Cotton is following a plan to get there. By retaining 100% ownership by bringing in debt that has the option to convert into company shares, she is looking farther down the line when their success will allow for a higher valuation during a future funding round. Plus, it enables El Guapo to remain a woman-owned enterprise, something that’s important to Cotton’s plan.

“I am keenly aware of the abysmal statistics regarding woman-owned businesses and business funding, and I am proud to have achieved this significant milestone so early in my career,” she says. “It has long been my vision to build a facility that can manufacture at scale and El Guapo is well positioned as an emerging national brand, with our sights focused on liquor distribution in all 50 states. I’m excited to grow our brand and bring our team’s vision to reality in the city I love.”

Cotton recently was selected as a 2021 James Beard Women’s Entrepreneurial Leadership Fellow, a program that selects female food, beverage, and hospitality business owners from across the country for advanced education, leadership, and networking opportunities. Its moves like these and her focus on the horizon that’s positioned El Guapo to become a significant player in the beverage market and deliver continued growth.