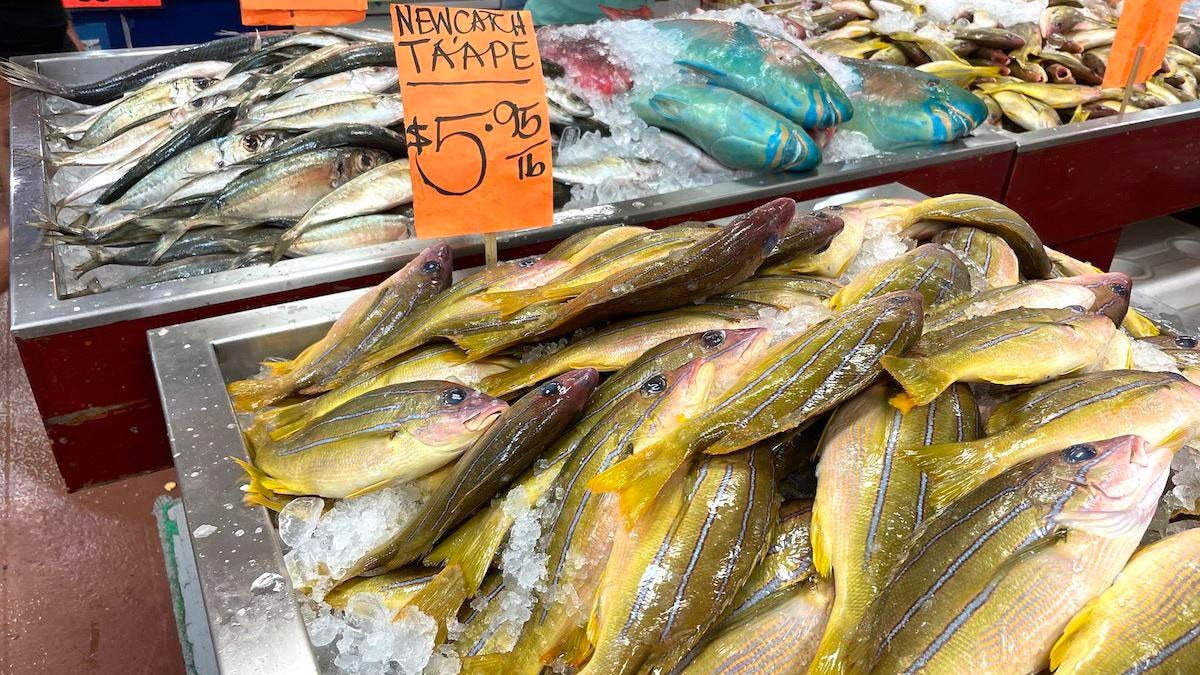 On a Sunday afternoon in Honolulu, a school of shoppers swirl around an island of metal and ice covered in freshly caught local fish of all colors and sizes. Between rows of akule, tai snapper, and opelu there are piles of five to six inch long snapper gleaming bright yellow with baby blue stripes, caught off the west coast of O’ahu, called taʻape. The army of workers behind the counter at Brian’s Seafood Market unload more as each stack depletes, topping them with white laminated signs that say, “New Catch” or “Sale.” Some simply say, “Fresh Ta’ape” with different prices attached to denote different sizes. On the backside of the counter workers pass over full bags, freshly scaled and gutted, for customers to bring home to their family or mom-and-pop restaurant to fry whole and serve with chili sauce and shoyu.

Brian’s is only one of a handful of markets, so far, that sell this fish. Taʻape (in Tahitian), also known as blue-striped snapper, was once thought to be a “trash fish” in Hawaiʻi. Some locals would catch or spear these one to two pound reef fish to bring home for dinner, while most fishermen would throw them back. In recent years that stigma has started to shift as conservationists and local chefs began touting taʻape as a sustainable food source.

“Residents and visitors of Hawaii eat a lot of seafood, approximately 12.6 more pounds per capita than the U.S. as a whole,” the University of Hawaiʻi reported. Since taʻape is an invasive species, catching them for consumption provides an opportunity for fishers to help protect reefs, earn income and improve food security. It also offers chefs a delicious, more affordable option for their menus.

The issue with popularizing an unpopular fish however, is that most people do not know enough about it yet to feel comfortable selling or eating it. This is slowly changing as local chefs increase demand and word gets out.

Taʻape was one of the fish introduced to the Hawaiian Islands in the 1950’s from the South Pacific as a new food source. The gesture proved disastrous when taʻape started competing with native fish for food and habitat, causing economic losses for the local fishing industry.

According to Conservation International’s website: “The Hawaiian Islands, the world’s most isolated archipelago, are highly susceptible to invasive species, which can harm habitats critical for Hawaiʻi’s fisheries. Non-native species introduced to Hawaiʻi —whether by accident or intentionally — cost the state tens of millions of dollars a year.”

Monterey Bay Aquariumʻs Seafood Watch Program rates taʻape “Best Choice,” meaning that the species is well managed, and caught in a way that does not harm other wildlife or the environment. Unlike ʻahi or ulua, a prized reef fish that is considered overfished in Hawaiʻi, the more taʻape you catch in Hawaiʻi the better.

Chef Gary Tamashiro always had a passion for seafood. He grew up fishing on Oʻahu and after graduating from culinary school left the island to work at some of the highest rated resorts in the country – many focused on fresh seafood. In Las Vegas he began working for the Hakkasan Group who transferred him home to Oʻahu in 2017 to help open Herringbone Waikīkī – a chic seafood-centric restaurant with a sister location in San Diego. Since he has been back he has noticed a lot of change.

“When I was growing up, fishing was so much better,” Tamashiro said. “Now a lot of people say, especially on Oʻahu, that the waters are being fished out. … with COVID hitting I’ve heard and seen a lot of people netting the smaller fish … I’ve seen, when I go out fishing, a lot of boats netting the schools. They are depleting the resources of that type of fish.”

Due to COVID-19, Hakkasan closed Herringbone in 2020, but in November 2021, the restaurant reopened under new management. Tamashiro likes the direction it is going in now that Aoki Group has taken over.

“They want us to utilize more local ingredients and more local verbiage on the menu,” Tamashiro said.

The staff has enjoyed flooding the menu with local spirits, beer, produce and gelato, but their main ingredient – seafood – is more difficult to come by.

Tamashiro knows that sustainability issues are the cause and works with vendors who take it seriously.

“Garden Valley Isle Seafood, and a couple of other seafood vendors that we get fish from, send us a report of how many boats went out each day and how many pounds they caught,” Tamashiro said.  “They tell me they only buy from certain fishermen … they’re really big on sustainability, so they won’t buy from people who don’t practice that.”

Tamashiro has considered taʻape, which would tick the sustainability box perfectly, but that has come with its own challenges.

“I actually asked one of our vendors about ta‘ape and they said they don’t usually sell it because they don’t want to run into any fish carrying ciguatera toxin,” he said. “Whenever we go out fishing and catch ta‘ape, we do eat it. I’ve never really heard of anybody getting ciguatera from ta‘ape.”

Ciguatera toxin grows on coral reefs in tropical and subtropical waters. It is consumed by herbivorous fish, which are then eaten by larger fish. As the toxin moves up the food chain it becomes more concentrated. When humans consume fish that are contaminated with the toxin, they can experience gastrointestinal and neurological symptoms, some as severe as being life-threatening. However, out of the invasive fish species brought to Hawaiʻi, including taʻape, toʻau and roi, roi was the only fish thought to be so high in ciguatera toxin that it is inedible.

Matthew Ramsey from Conservation International (CI) Hawai’i worked with fishermen throughout the state collecting roi and reef fish to help Paul Biendfang’s lab learn more about the toxin. After many years of trying to identify indicators or patterns that could help with the detection or prediction of the toxin their bottom line was that it is complicated.

“The topic is surrounded by lots of misinformation and myth,” Ramsey said. “After thousands of fish and associated lab tests, a few conclusions were reached but the general take away message is that we still don’t know enough about the toxin in order to accurately predict or detect it.”

Siasau “Saui” Matagiese, a fish sommelier at Mina’s Fish House, whose job is to educate diners about all things seafood, says education is the key.

“Maybe we can have more experts on ciguatera to inform our chefs that it’s truly safe to use, then we can seek out more distributors that are willing to get it,” he said. “I love eating taʻape and toʻau and I think most restaurants and fish distributors aren’t educated enough on it. Most of our distributors don’t carry any invasive local fish unless they’re private fishermen with their own license. Maybe the next step would be to educate the wholesale distributors to push this local product more efficiently.”

Just a few blocks away from Herringbone, in Waikīkī, chef Nae Ogawa from NatuRe is making progress. Garden Valley Isle Seafood has just agreed to start selling her taʻape when available.

“I want to utilize ta‘ape on our menu, mainly because they deplete many of our native fish,” Ogawa said. “I would like to, as a chef, contribute by educating our guests about the current situation of our reefs and how we should strongly consider consuming different types of fish that are readily available on our island. I think it would be a step in the right direction for our community.”

In 2020, CI teamed up with Oʻahu nonprofit Chef Hui to start connecting fishers, chefs, and seafood businesses across Hawaiʻi in order to build local markets for taʻape. In 2021 they created a Sustainable Seafood Council made up of some of Hawaiʻi’s most notable chefs who hosted several taʻape themed dinners during Hawaiʻi Seafood Month in October to increase consumer education, awareness and availability for taʻape.

CI’s Jhana Young has been doing the hard work of connecting fishers with distributors in order to get it to chefs. This includes convincing the fishers and distributors that there is a demand and getting chefs to commit to using taʻape on their menus. She secured three local fishers who caught over 400 pounds of taʻape for events hosted by Mark “Gooch” Noguchi (Pili Group), Lee Anne Wong (Koko Head Cafe and Papa‘aina at the Pioneer Inn), Ed Kenney (Mud Hen Water and Kaimuki Superette), Mark Oyama (Mark’s Place), Mark Pomaski (Moon and Turtle), Jayson Kanekoa (Waikoloa Beach Marriott Resort & Spa) and his son Ocean Kanekoa (an up-and-comer who was recently featured on “Top Chef Family Style”).

“I love what you guys have been doing, bringing awareness to taʻape, an invasive, underutilized, unappreciated fish,” remarked Kenney at his dinner that showcased taʻape four different ways.

Pomaski continues to purchase ta’ape from the Hilo-based fishers Noah and Uncle Keoni AhChong, who supplied his event, and now serves it regularly at Moon and Turtle.

“It’s been really exciting to see and taste all of the innovative ways the chefs used taʻape,” said Young. “From taʻape kamaboko to taʻape fish sauce and taʻape ceviche, I was completely blown away by the creative and versatile ways taʻape can be cooked!”

Innovators always have the hardest time when trying to create change or a new trend, but their efforts are not in vain since ta‘ape is a year-round solution that will create a viable food source for years to come. So what is it going to take?

Tamashiro said he thinks increasing awareness and teaching the younger generations about sustainability is the key.

“If chefs are going to diversify their menus, the question is how do we ensure the sale of these new fish,” Matagiese said. “People won’t often order what they don’t know. And that’s where the fishermen in us thrive. We can talk about the different options, go over what to expect in taste or texture, describe the fish in a sense that our guests feel like they know more what to expect and can make a choice [based] off their personal preference. For me, the initiative for local sourcing is [that] I really want to keep the money in our economy.”

So the next time you are in a seafood restaurant in Hawaiʻi, look for taʻape on the menu. If you donʻt see it, perhaps ask your server, “Why not?”

SETTLING IN OUR HOME!
Cold War warning sirens are sounding across France. Here’s why
The photographer documenting Australia’s abandoned places
The hidden spaces on planes that are off limits to passengers
I Removed My Engine, There’s No Turning Back! – Electric Camper Build Ep 2