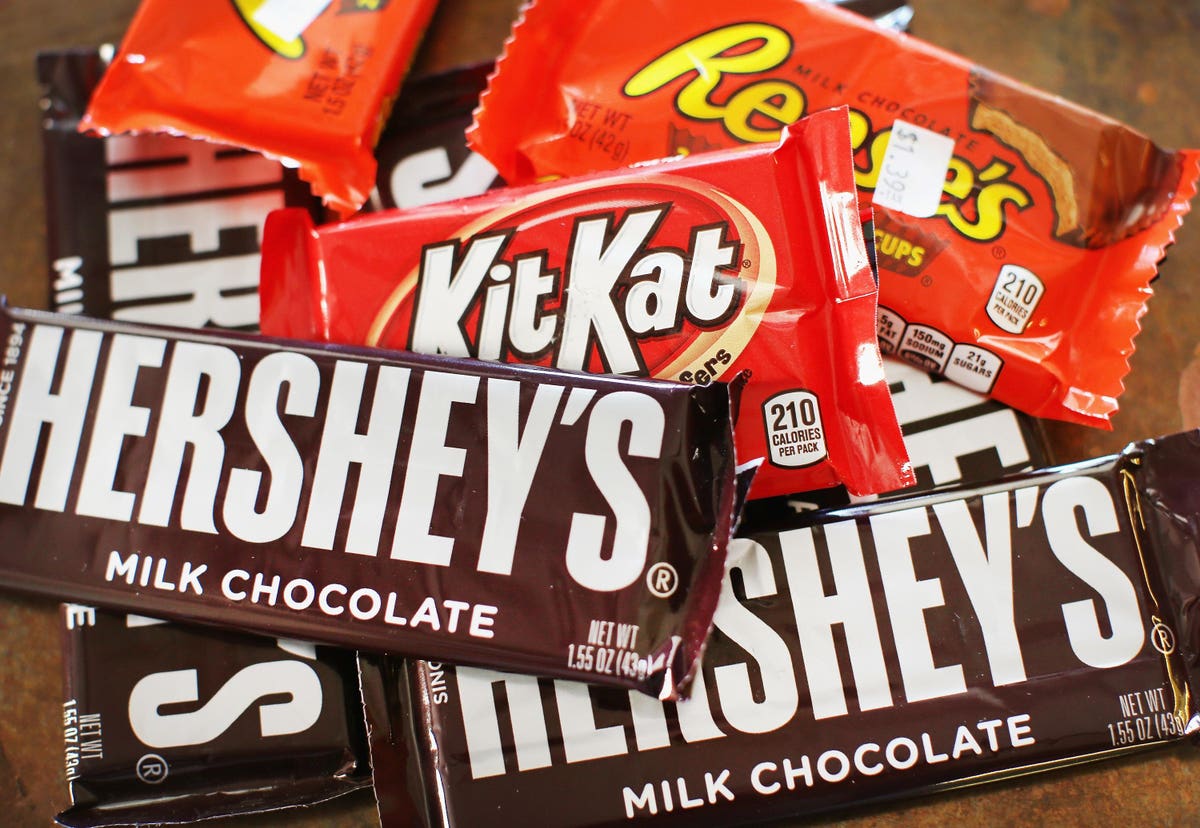 The holidays are taking on a bit of a bitter taste for more than half a dozen independent American breweries getting threatened with lawsuits and demands for exorbitant payments from the company that gives the self-proclaimed “sweetest place on Earth” its name: The Hershey
Company. Over the past year, the world’s fifth largest chocolate confectioner has sent cease and desist letters to at least eight breweries across the country accusing them of infringing on its trademarks and requesting compensation up to $20,000.

In one case, Hershey is demanding that the owners of Parliament Brewing in Sonoma County, California, stop calling a beer a common catch-phrase that happens to share a name with one of its candy bars.

“We named a beer Whatchamacallit because we had a plumber we loved who was kind of hokey. He would refer to everything as a ‘whatchamacallit.’ I’d never heard the term before,” says co-owner Justin Bosch, who brewed the Whatchamacallit imperial IPA twice, once when Parliament opened in 2019 and again in 2020.

He received the notice late in the summer of 2021.

He describes his reaction as, “‘You’ve got to be f***ing kidding me.’ I went to Hershey Park (amusement park) like ten times as a kid. It made me very sad.”

Bosch, who practices law by day, says he agreed not to make the beer again, even though he’d only brewed a total of 300 gallons (19-20 kegs), sold exclusively in his taproom. But that didn’t satisfy Hershey’s legal team.

“I don’t agree there’s an issue here but in the interest of making everybody happy I’ll stop,” he says, paraphrasing his response. “And they came back with, ‘Give us $20,000.’”

More precisely, even though they made no initial mention of money and expressed a wish to “resolve this matter quickly and amicably,” they came back with a letter from their law firm that stated relief could only come from paying a steep price.

It read, “While we appreciate your willingness to cooperate and to cease infringing our client’s intellectual property rights, be advised that entering a formal agreement with Hershey will be necessary to resolve your past unauthorized use of the WHATCHAMACALLIT® trademark and to confirm your understanding going forward.”

“It’s absurd. It’s just absurd,” says Mia Saling, the California lawyer who represents Parliament and three other targeted breweries, who also expressed shock that their concessions to stop selling these products were met not with amicable resolution but with an unexpected monetary shakedown.

While she understands the need for companies to defend their trademarks and advises her clients to comply by stripping the potentially infringing names from their beers and pulling down their advertising, she says, “Hershey’s is demanding these insane amounts of money on top of it, and that’s not required under federal law to police their mark.”

Parliament, along with most of the other breweries, is attempting to negotiate with the publicly traded Central Pennsylvania company that reported $2.4 billion in net sales for the third quarter of 2021 and $8.1 billion in revenue last year. One client, however, has decided to give in by paying the (undisclosed) requested amount.

That client, who did not wish to be named after signing a non-disclosure agreement, was targeted for advertising — without proper authorization — its use of three of its most beloved Hershey brands as ingredients in a few extremely limited taproom-only weekly releases. Between 2016 and 2019, the brewery brewed one keg each of four beers that included either Reese’s Peanut Butter cups, Almond Joys or Jolly Ranchers. Owners donated the $200 it made on one of the beers to charity.

According to a press statement Hershey issued on October 28,  “Stronger than anticipated consumer demand, an improved tax outlook and optimized brand investment” have caused the company to raise its 2022 financial projections to reflect an anticipated full-year net sales growth of 8% to 9%.”

“It makes no sense,” says Saling, who notes that similar stories of corporate Goliaths alleging trademark infringements by independent agents usually end when the little guy stops selling the product in question. “It’s a complete money grab that seems very counter to (founder Milton Hershey’s) philanthropist background. The leadership of the company he founded is now shaking down these small businesses.”

Hershey director of communications Jeff Beckman emails, “We certainly understand the interest that other companies have in wanting to participate in the appeal of our popular candy brands, but using our trademarks and trade dress without permission is simply not the way to do it. We expect that all businesses, big or small, national or local, will abide by the rights afforded to trademark owners. It is these trademark protections that create a fair playing field for everyone. These same laws protect these local brewers from having another brewery open down the street using their same business name.”

But Saling wonders aloud if Hershey’s “rampage,” as she calls it, wasn’t triggered by a licensing agreement signed between the snackmaker and its Central Pennsylvania neighbor D.G. Yuengling and Sons brewery in 2019. At first the agreement produced a draft-only limited-release called “Yuengling Hershey’s Chocolate Porter.” In 2020 the collaboration came out in package form, and 2021 brought a third release, this time to much wider distribution. A spokesperson for Yuengling referred questions about the letters to Hershey.

Beckman responds, “In the case of the Hershey co-branded beer with D.G. Yuengling & Son, that was the result of a licensing arrangement to which the two companies mutually agreed and coordinated, which is the correct way to go about using our trademarked brand names on products. This is the same way we work with other food companies to create a variety of co-branded or branded products that range from cereals to cookies to beer.”

Regardless of the impetus for the timing of the letters, the microbreweries are being put on the defensive, feeling let down by an iconic childhood favorite whose actions they view as insulting and illegitimate.

“The amounts are arbitrary,” says Saling. “There’s no basis for how they’re calculating, and in court they’d have to prove their actual damages. Who’s going to walk into a brewery trying to make a decision of whether they’re going to buy candy or buy beer? The risk of loss of sales is just not there.”