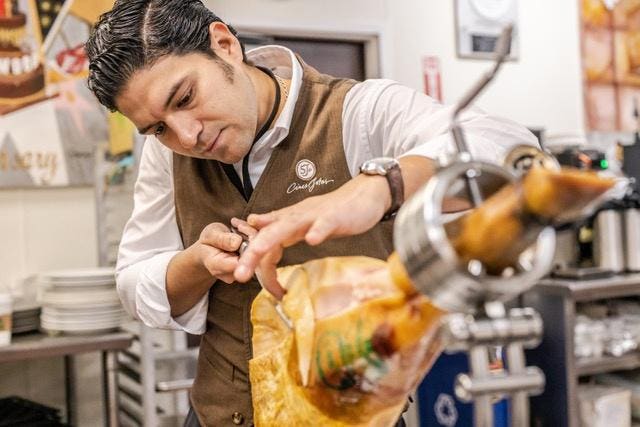 “Ta ta ta TAM, ta ta ta TAM!” sang the Master. It sounded like a percussion class, but instead of banging on drums, Raúl Garrido, 35, slicked back black hair and tweed vest over his white button down, was stroking a pig haunch with his knife. Each beat produced a perfect petal of Jamón 100% Ibérico de Bellota, the top-notch Spanish ham that seems to have become the new caviar. We’ve gone from celebrity chefs to starred pastry chefs and then mixologists. Is the next step, the celebrity ham carver?

The question seemed timely since many fine dining restaurants such as Gabriel Kreuther in New York, Alinea in Chicago and Thomas Keller’s in California now feature freshly sliced Jamón 100% Ibérico de Bellota on the same level as truffles and champagne.

I’d first tasted this delicious dry-cured ham a few years ago when I visited the village of Jabugo in Southwestern Spain where Cinco Jotas, one of the leading purveyors of Jamón Ibérico, is headquartered. In the surrounding area, I hiked through the forest where black pigs roam amongst oak trees and rosemary bushes. Chatting with the farmers, I learned that the pigs spend their lives in the fields, gorging on acorns when they are in season—one of several keys behind the ham’s taste, a unique mix of earthy and nutty.

The landscape in this part of Spain, about two hours north of Seville by car, is stunning, woodsy, and Mediterranean, but sitting down with Raúl Garrido back in New York, I reminisced about the man-made cellars in Jabugo where rows and rows of pig haunches rolled in salt, breathe in the mountain air as they slowly mature, sometimes for as long as five years, into Jamón 100% Ibérico de Bellota (meaning acorn).

The precision of the maturation process is completely artisanal. The “cellars” in Jabugo are above ground and there are no machinery tweaking the temperature or the humidity level of the rooms. Only the few “cellar masters” decide when to open the windows and how much, when to turn the hanging hams and when to verify (with pressing fingers) whether the haunches are ready for the world.

“Only 1% of Spanish ham can legally be called Jamón 100% Ibérico de Bellota,” he explained. “But people assume that anything called Jamón is the real thing.”

In fact, most Spanish producers mix various breeds with the black Ibérico to maximize their outputs, but Cinco Jotas is the only company whose products come exclusively from the pure black pigs fed on acorns. Commercially that translates into a black label and the appellation pata negra. Unfortunately, the USDA requirements demand that the black hooves be cut before the legs are shipped to the United States.

Today, a whole leg costs $1,399 and doesn’t include the stand that holds the ham and facilitates the carving. Restaurants usually charge $30 per ounce but more often now, diners who plan private events require a master carver on site. Mr. Garrido was already a well-known master carver when he was hired by Cinco Jotas five years ago, but now, he’s developed quite a following.

Dashing around town, two pig legs wrapped into sleek, black cases and worn over his shoulders, he brings to mind a tennis player late for a match. That night at Le Pavillon, he first cuts through the skin, then removes the yellow fat that protects the prized parts before tasting the meat.

“I savor it as I would an old sherry,” he says, “I taste the forest and the cellar, the terroir of the ham.”

The couple who met at Disneyland
All American Roses: The Hotter Than Heck Edition!
SETTLING IN OUR HOME!
England’s most beautiful villages to visit in 2022
The hidden spaces on planes that are off limits to passengers