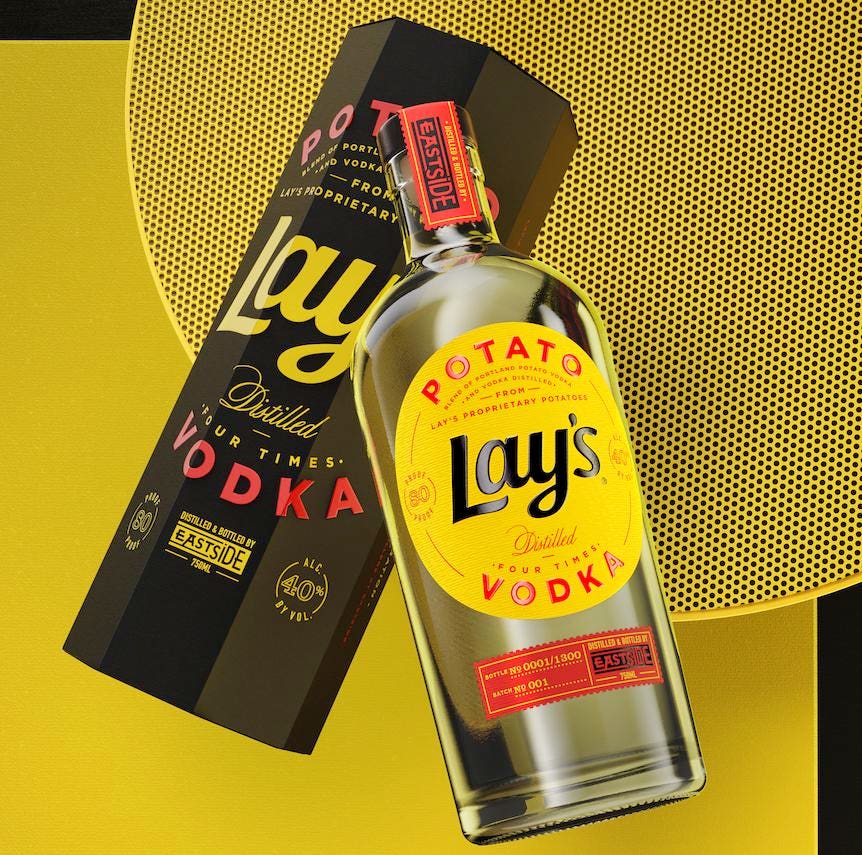 The announcement of the release of Lay’s Potato Vodka this week (it sold out in one day) is yet another example of the further blurring of the lines that once separated the alcohol industry from the rest of the consumer-packaged goods market. Available online only, the limited-edition bottle is sure to sell out quickly, creating yet more buzz from consumers looking for something different in an increasingly crowded marketplace.

Created in partnership with Portland, Oregon’s Eastside Distilling, the spirit uses vodka made from the same potatoes used in Lay’s famous chips. By linking an alcohol spirit to a well-known food brand, both companies know that they are assured instant public interest, which very well might result in further releases in the future.

“At Lay’s, we’re always looking for new and innovative ways to bring joy and fun to our fans,” says Melissa Miranda, Senior Director of Marketing, Frito-Lay North America. “This launch comes just in time for the holidays so our fans who are 21 years old and over can enjoy Lay’s in an exciting, brand-new way at their get-togethers or can gift Lay’s Vodka to the Lay’s fan in their lives. And you never know what future plans we have up our sleeves! We love to keep our fans guessing as to what is coming next.”

It is just one of a plethora of brand crossovers to hit the alcohol market over the last few years as consumer interest in new products is growing. According to the Beverage Information Group data, U.S. alcohol consumption increased by 45 million cases in 2020. That broke down to wine adding 3.5 million cases, spirits 15 million cases, and beer/malt beverage adding 25 million cases. As the hard seltzer explosion shows, consumers are very comfortable jumping across categories, especially for a new entrant with a good product, packaging, or an interesting story/hook.

In November, Arby’s created a stir with the release of two different vodkas modeled after their French fries. Both their Curly Fry and Crinkle Fry Vodka’s sold out quickly at $59.99 per bottle. Earlier this year, Natural Light, a beer known more for keg stands and tailgates, released a line extension of three flavored vodkas (priced at $14.99), Lemonade, Strawberry Lemonade, and Black Cherry with a money-back guarantee to consumers.

The wine industry is not immune to the periodic arrivals of seemingly misfit products either. A limited-edition release of a Grey Poupon wine from south France sold out in one day, and Taco Bell is bringing back its Jalapeño Noir in Canada. Maybe the most bizarre combination is the collaboration between Cheez-It and House Wine that has come out the last three years to celebrate National Wine and Cheese Day on July 25. The combined box pairs a vintage of wine with a particular flavor of the salty snacks.

Nowhere is the line becoming more blurred than in the white-hot hard seltzer space where it seems every big player is trying to gain a foothold. The fast-food giant Sonic entered the space in March with the nationwide release of a line of products built around their famous slushies. Both Coca-Cola
and PepsiCo
entered the market too with the release of two products that have the possibility to gain a significant share of the market due to their connection to well-known brands Topo Chico and Mountain Dew, respectively.

As the companies behind these unique releases watch and see how their crossover’s fare, the chances are high that the market will see more of them. The opportunity to create a new revenue stream and get a foothold in the highly profitable $250 billion American alcohol market is enticing. Lay’s Potato Chip Vodka is only the latest, with the possibility of flavored versions looming large, to appear on the public’s consciousness. It seems that crossovers work.

How two women with the exact same name became best friends
Bella Hadid On Breaking Into The Business World, The Allure Of Kin Euphorics, And The Importance Of Female Leadership Post-Roe
Why Private Label Brands Are Having Their Moment
All American Roses: The Hotter Than Heck Edition!
Dufour 61: A Dynamic New Flagship Yacht