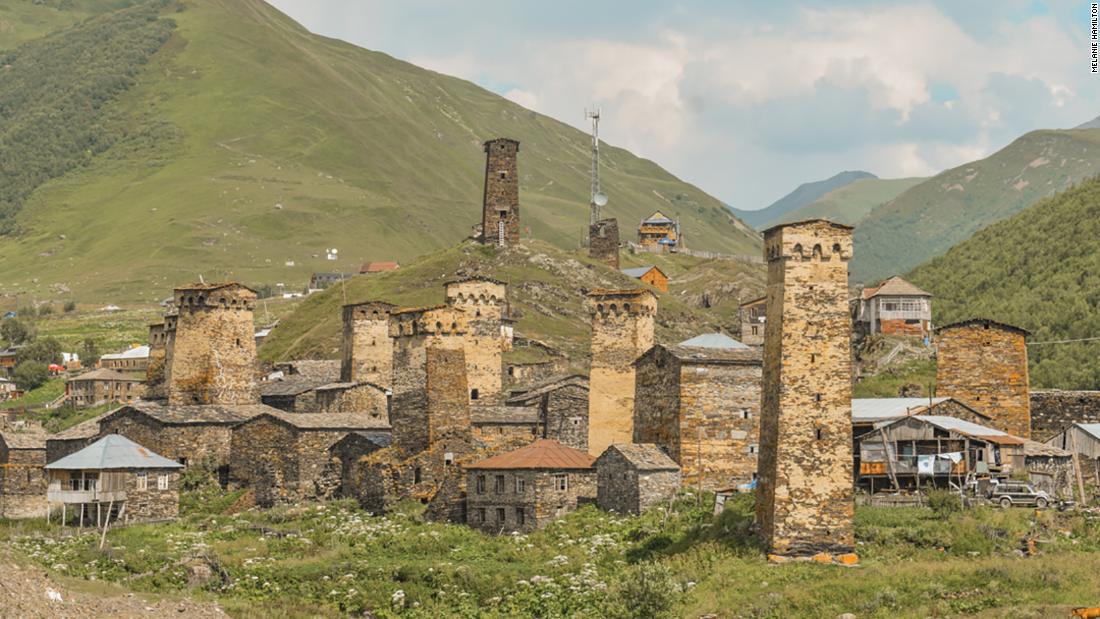 Svaneti, Georgia (CNN) — It’s a dark and eerily quiet dusk in February, precisely 10 weeks before Easter, when clusters of men carrying torches make their way toward a nearby cemetery.

They’ll partake in an evening of feasting, teary-eyed toasts to the dead, chorusing sacred chants and circle dancing around a bonfire. One by one, each grave is illuminated with a torch fashioned from home-dried birch as tables sculpted from snow are set with jugs of homemade spirits and saucers of bread pierced with slender beeswax votives.

It marks the start of Lamproba, an annual ritual aimed at securing a fertile spring and rekindling the memory of the dead — literally and figuratively.

It’s one of the many lasting traditions of Svaneti, a remote region spread across an expanse of snow-clad peaks and spruce-covered gorges in Georgia’s highlands.

Linked together by a series of tiny medieval hamlets, the area is known for its distinct highlander culture, mysterious folk customs and ancient local tongue. None of which are more representative of Svaneti than the hundreds of koshkebi (medieval watchtowers) dotting the mountain landscape.

Thanks to the region’s rugged landscape and extreme isolation, it’s an intrepid hiker’s dream. Svaneti’s alpine summers reel in many a wayfarer looking to conquer the web of trails through old-fangled villages with breathtaking scenery of crumbling churches, flowery meadows and the wide open frontier of the Caucasus Mountains.

The most famous trek takes around 3-5 days and begins in Mestia, a quaint townlet dotted with picturesque Svan towers cradled by soaring peaks. In lieu of pitching a tent, the convenient number of villages along the route gives backpackers overnight reprieves at local home stays where the food is hot and the alcohol is strong.

Among these villages is Adishi, a quiet little hideaway rich in historic sites such as the 12th century Saint George church, where pilgrims offer up thanks to the dragon-slaying martyr in the form of sacrificed sheep and potent home-brewed spirits. At the end, weary travelers arrive in Ushguli, a cluster of villages sat in the shadow of the mighty Shkhara Mountain.

It’s easy to see why Svaneti is a popular destination for hikers.

On a lone Ushguli hill sits Lamaria, a humble 10th century orthodox Christian church named for the ancient Svan goddess, and a lasting example of vivid duality in the region. Inside you’ll find distressed frescoes and an altar lit only by prayer candles and a sliver of light pouring in from the clerestory above.

For the less daring though, Mestia and nearby Mazeri offer a plethora of day hikes that would leave John Muir blushing. Spend the day strolling toward Shdugra waterfall tucked away above Mazeri village, or tackle the intense day hike from Mestia to the pristine Koruldi Lakes.

To connect the two, spend the day trekking the Guli Pass — an intense but rewarding stretch between Mazeri and Mestia. The route offers spectacular views of Mt. Ushba, a peak steeped in lore surrounding Dali, the Svan goddess of the hunt and central figure in the ancient folk song and circle dance, “Dælil k’ojas khelghwazhale” (“Dali is Giving Birth on the Crags”).

A culture as diverse as its landscape

Marooned in the wilds of the mountains for centuries, Svans evaded the many conquests and wars that ravaged lowland Georgia. Its isolation throughout history has lent it a culture and language as defined as its landscape.

The local tongue, Svan — an unwritten, endangered cousin to Georgian — has survived only thanks to oral tradition, serving as another testament to the resilience of the region. And while the language may be at risk for extinction, its polyphonic hymns have preserved it in amber.

Groups of men donning woolen, garnet colored chokhas (traditional men’s coats) with embossed daggers hanging from the waist still gather together to belt out untempered melodies of folk tales and ritual chants in their native Svan.

These folk tunes ripple out of the many religious gatherings unique to the region like Kvirikoba, the annual pilgrimage of orthodox Christian believers to St. Kvirike, an 11th century orthodox church situated on a high hill above the village Kala.

The holiday is marked with fervent prayers to the mystical Shaliani icon, a relic usually housed behind glass in a local museum that is lent out annually for the holy day. Traditions like these are longstanding. Throughout history the whole of Svaneti has served as a hiding place with relics and treasures often brought from the lowlands in times of war for safekeeping.

Hundreds of koshkebi (medieval towers) — some more than a thousand years old — make Svaneti feel more like a Tolkien epic and less like a place that exists in a modern Europe.

After all, the wilds of Svaneti never could be fortified with a typical defense wall. In their day, these towers served as a warning to invaders and functioned as living quarters for entire families. Many of these towers still loom over Svaneti with the tiny village of Chazhashi boasting a maze of 200 of them.

Meanwhile, in Mestia you’ll find the Margiani House — a tower-turned-museum that encapsulates the lives of the famous Margiani family that once occupied it.

Arguably the backbone of Svan culture is its food — rich, dense and comforting. In a tiny parochial schoolhouse off a country road in Latali, women in floor-length dresses toil away at grindstones as fragrant whiffs of wild caraway, coriander and garlic puff into the air.

Born out of a need to stretch salt reserves, it quickly became a staple in Svaneti and Georgia as a whole. Add a smidgeon to your steaming pot of lobio — stewed beans from neighboring Racha-Lechkhumi — or use it to amp up a simple cucumber tomato salad. Find it doled out in tiny plastic parcels across the region and used generously in all sorts of Svan and Georgian food.

Local favorites include tashmijabi, a dish made up of piping hot potatoes folded into briny cheese until an ultra-stretchy, gooey, putty-puree fuses together.

Even more popular is kubdari — a soft frisbee of bread stuffed with a hearty filling of beef, stewed onions and spices.

For a meatless but equally filling choice, opt for fetviani, a flatbread oozing with salty mountain cheese and green millet flour, or chvishtari, a crispy corn bread stuffed with bits of cheese. Wash it all down with a swig of local moonshine made from Svanetian alpine honey.

TIE-DYING WITH GRACE | LEARN WITH LOUIS
Delta offers free flight changes over July Fourth weekend ahead of possible ‘operational challenges’
Dow Jumps 800 Points, Stocks Snap Three-Week Losing Streak After Inflation Expectations Ease
Tourists are back in Iceland. But so is whale hunting
Why Private Label Brands Are Having Their Moment