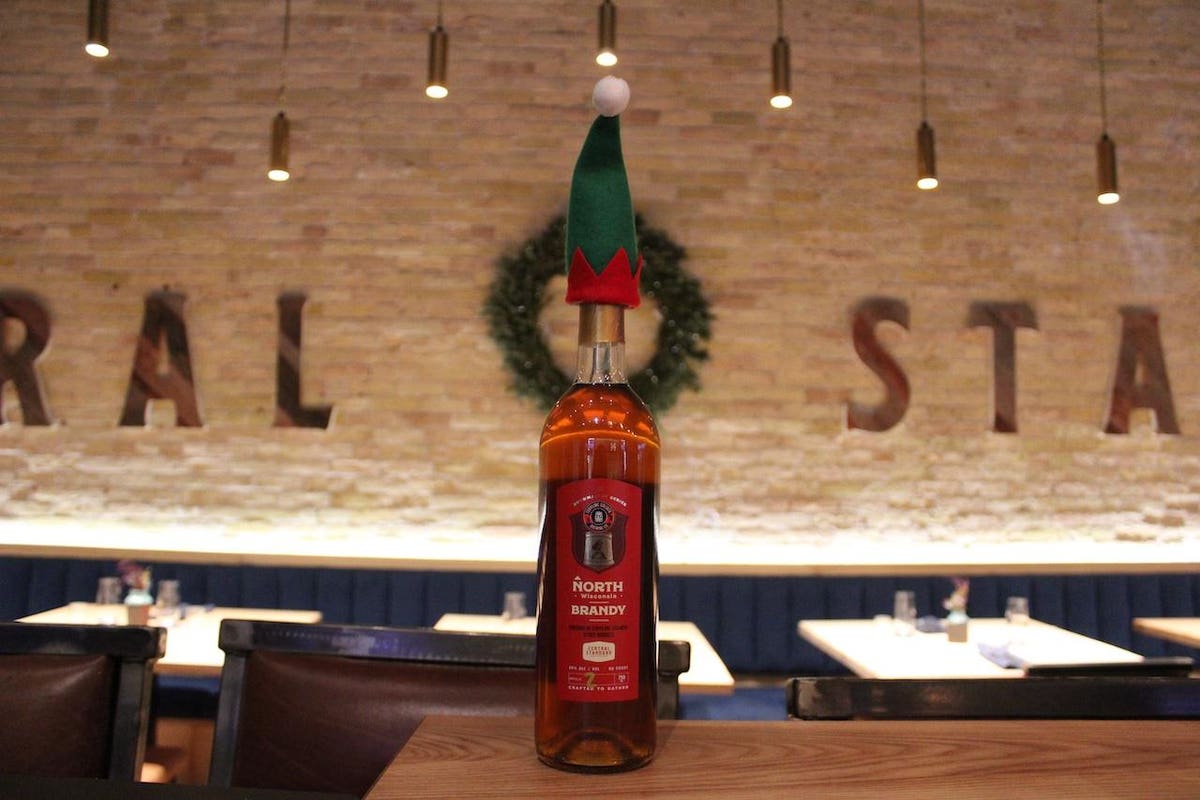 In Wisconsin, giving brandy is a much loved holiday tradition. But you don’t have to live in America’s Dairyland to partake of this splendid custom and deliciously drinkable custom. Here’s a round-up of some great American brandies to gift this year.

Part of Central Standard craft distillery’s Brewmasters Series, this brandy is aged in barrels that previously held Toppling Goliath stout, from the famed Iowa brewing company, and before housing beer, the barrels were filled with maple syrup. This flavor combination imparts a subtle espresso aroma with hints of chocolate, caramel and just the slightest maple syrup finish. This Milwaukee-based distillery also makes a delicious North WI brandy, which is aged for at least two years in oak barrels before getting finished in bourbon barrels.

For more than two centuries, nine generations of the Laird family have been producing applejack and apple brandy. To commemorate the 10th generation of family who have preserved this spirited American tradition, Laird & Company celebrate with Laird’s 10th Generation Apple Brandy. Blended from selected barrels and aged for five years, this smooth and extremely sippable brandy is bottled in bond.

Made with the same commitment to its California champagnes, this brandy starts with a blend of red and white grapes that are harvested at night to make sure they arrive at the distillery cold. Korbel, which is the only major brandy maker that maintains total control over the entire brandy making process from grape to bottle, presses the grapes and then ferments them using some of the same cuvee techniques, and then the base wines are distilled in a copper column still and then aged in charred oak barrels. The brandy is aged for a few years, and then only the best barrels are blended into the Gold Reserve V.S.O.P. The finished brandy offers a nuanced, smoky aroma, and only 1,500 bottles are made. If you prefer your brandy on the sweet side, the Korbel XS brandy, which is blended with small amounts of spice, vanilla, orange and cane sugar, might be to your liking.

Made at the Wollersheim Distillery, Press House is a re-creation of the brandy made on site in the 1870s, and no sweeteners or caramel colors are added. This Wisconsin brandy is made from a blend of American native grape varieties like the ones that were grown on the estate pre-Prohibition. “Each batch is blended from barrels across vintages, using both new and used barrels to balance sweet wood characters like vanilla and caramel with the fruity and fragrant flavors we get from the grapes,” says Jessi Schoville, marketing director.

If you’re looking for a brandy that acts more like a whisky in cocktails, then that’s the premise behind Bertoux, a brandy made with French Columbard grapes, aged in American and French oaks. “That’s really been the project, to use the resurgent interest in brown spirits, but to think of the initial role brandy had as a fruit forward spirit in (the original) cocktail culture, and we used techniques to develop a brandy that hasn’t been done in testates since probably pre-Prohibition,” says Jeff Menashe, founder. Menashe says Bertoux goes great in any holiday cocktail, but he recommends trying it out in a Manhattan.

The Christian Bros. Sacred Bond brandy is an authentic, bottled-in-bond brandy produced from one distillation season, by one distiller, at one distillery, aged for at least four years in American white oak bourbon barrels – used Heaven Hill bourbon barrels, to be exact. Made from Thompson and Columbard grapes, the base wine is distilled through copper pot stills before its aging process begins.

Ripe, Midwestern-grown pears are milled, fermented, distilled and then aged for more than two years to become this barrel-aged brandy. Only two full casks of this brandy were produced. The production methods and flavors of this brandy are reminiscent of French Calvados, but with a twist of pear. If you prefer apple, this Milwaukee craft distillery also regularly produces Brightenwoods apple brandy, as well as a seasonal line of other fruit brandies, including a just released and equally delightful plum brandy.

If you’re able to swing by the tasting room of St. Julian Winery before the holidays, you should pick up a bottle of this Michigan winery/distillery’s brandy. Made from Chardonnay, Pinot Gris, and Vidal Blanc grapes, this brandy is soft and smooth, with notes of vanilla, butterscotch and even chocolate. This brandy is aged and made from Michigan-grown fruit.