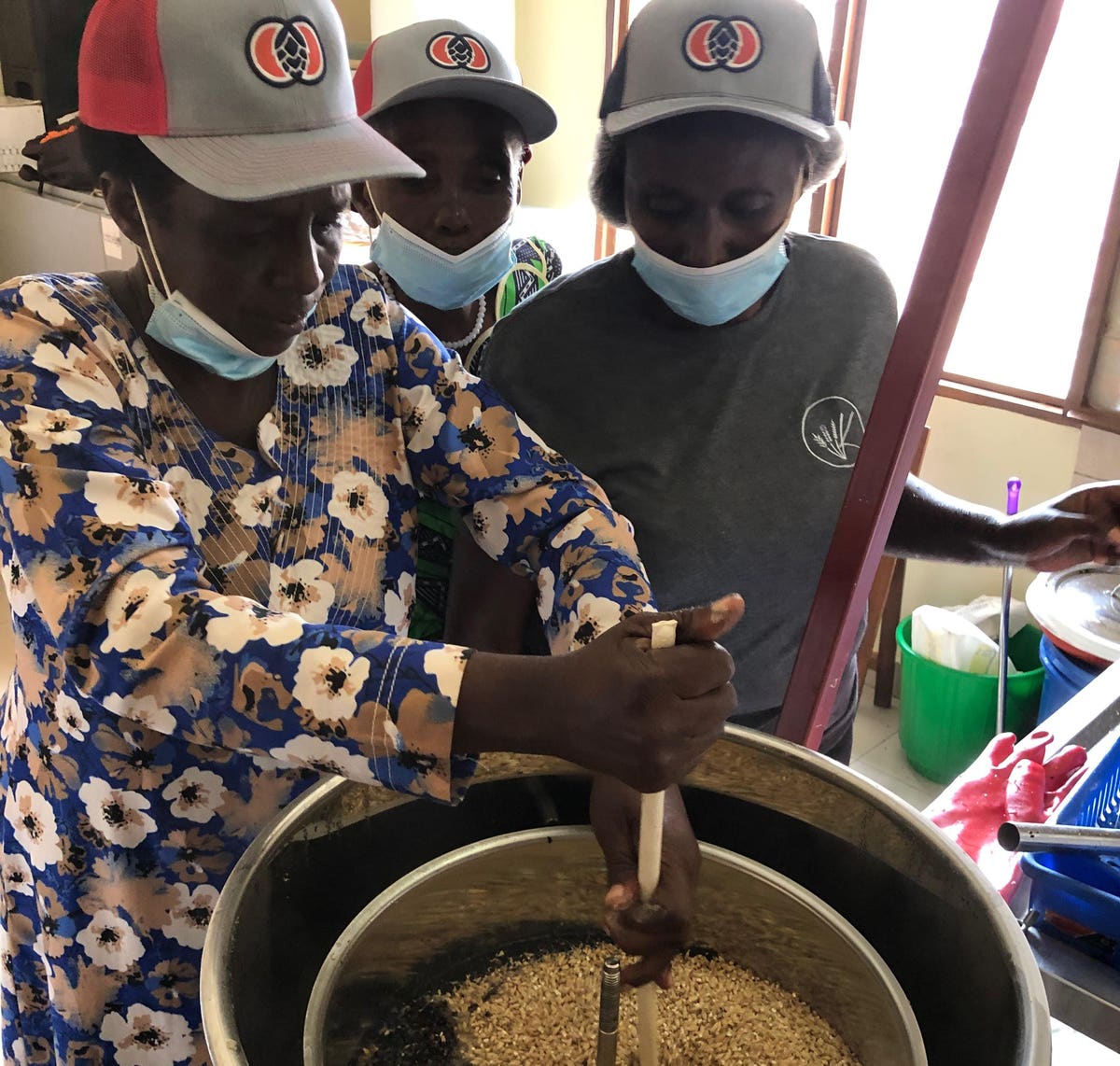 The most universally recognized craft brewing darling in Africa has massive plans for the coming year but is falling desperately short of the money it needs to realize the totality of its dreams. Almost entirely owned and operated by women, Rwanda’s Kweza Craft Brewery aims to open a stunning destination brewpub in July and quickly ramp up production to distribute throughout the country and beyond. But the pioneering start-up is having trouble attracting enough investment to purchase the necessary equipment, and a ballyhooed crowdfunding campaign has only reached 2% of its goal with a mere two weeks left.

Kweza – which holds unique status as the only independent commercial brewery in Rwanda, arguably the continent’s most uplifting example of economic success over the past decade – is a feel-good story with enormous, albeit unrealized, potential.

“We have just over 2,000 followers, so I think we’re in a bit of an echo chamber. Other crowdfund success stories were able to use larger existing platforms and celebrity endorsements to get to a larger audience. So if any celebrities out there believe in African brewing and women leading a new national industry in Rwanda, … nudge nudge, wink wink…” emails the preternaturally positive managing partner Jessi Flynn, who’s spearheading the Indiegogo campaign that’s so far generated just $4,669 of its $200,000 goal.

Kweza has caught the attention of one celebrity project, the Ellen DeGeneres Campus of the Dian Fossey Gorilla Fund, which will serve Kweza’s beer. Thanks to additional commitments from the nation’s luxury tourism lodges and partnerships with its fine-dining restaurants, Kweza has pre-sold out of beer through the middle of 2022 and is turning down requests for orders.

This might be viewed as a good problem. It is a serious problem nonetheless.

As many independent breweries have learned over the decades, it takes money to make beer and more beer to make money. Countless craft breweries – including America’s original of the modern era, New Albion Brewing – have found themselves unequipped to meet demand and unable to to generate revenue within their existing margins to make the capital expenditures required to make more. Some breweries take on venture capital. Others sell out. New Albion closed five years after it opened.

Kweza took advantage of a mechanism unavailable to early US craft breweries: online crowdfunding. The timing is critical.

Currently brewing on a 50 liter (13 gallon) pilot system, Kweza has just received government approval to sell its beer on a wider scale and build an airy, 6,000 sq. ft. natural wood building next to a nature park overlooking the city of Kigali. But it needs approximately $300,000 to fund construction and even more to import the equipment it needs to expand capacity.

Without it, who knows how long it might take – if ever – to fulfill Kweza’s multifaceted mission to create generational wealth for Rwandan women, sustain and promote African biodiversity and economic progress, and create a model for other Black-owned businesses to follow?

Flynn, a caucasian American expat, celebrates Kweza’s 99.5% female and non-white international ownership and hopes to replicate that percentage for other companies by making introductions and working tirelessly to increase awareness of the barriers women and people of color face in launching businesses.

“Many women and People of Color are interested in investing, but often haven’t been in environments to learn about it,” she writes. “Female founders rarely receive investment, especially (venture capital) investment, despite higher than average success rates, and … it is mainly white men who have investment money, and therefore get to decide which business ideas in the world get invested in, and which don’t. And studies have shown over and over that we invest in those who are like us, so it perpetuates the cycle. It also perpetuates the wealth divisions in the world.”

Flynn’s been able to get word out through her connections in the global brewing world. The Indiegogo campaign incentivizes donations with prizes such as my book about women’s beer history, an adventure tour of Rwanda, and, most importantly, beers brewed as a collaboration between 16 breweries in Africa, North America and Europe. They incorporate a hop blend specifically created for Kweza by US-based Yakima Chief Hops to enhance the relatively thin mouthfeel of beers brewed with the African staple cereal grain, sorghum. YCH is working on making the blend available soon to the commercial brewing public.

While Flynn provides much of the mechanical and marketing know-how to Kweza, she relies chiefly on business partner and assistant brewer Josephine Uwase for knowledge of African ingredients and tradition. Uwase began brewing to support her family during the Rwandan genocide in 1994. While multinational megabreweries dominate Africa’s beer market, millions of African women still follow ancient matrilineal custom by brewing tiny amounts of mostly sorghum beer in their homes to sell for a pittance to neighbors.

Uwase takes over for Kweza’s original founder (who had to step away from the business because of a family emergency) as the native Rwandan face of the brewery and will guide Kweza beyond its classic European styles into a new era of what the team calls “biodiversity beers.” This developing series will concentrate on showcasing indigenous ingredients – some to be grown at the brewpub – even more so than the existing lineup. She’ll also help lead female Rwandan trainees who’ll come to learn brewing and business at Kweza once the new facility is built with transparency and teaching at the forefront of its plans.

The team is talking with tourism organizations and exporters about bringing its products and philosophies on long-term economic sustainability to a wider public and is already negotiating with a sports-centric community plaza to build a second brewpub.

That “second” brewpub could potentially become the first as July 2022 feels simultaneously like a very short and very long way off, especially as COVID repeatedly seals Rwanda’s borders to freight and keeps prospective contributions from the small-scale financing world somewhat out of reach. The pandemic did provide a silver lining in that Kweza purchased a 650 liter (172 gallon/86 bbl) brewhouse, fermenters, brite tanks, plus a mill, filter, and bottling line from a South African brewery that sold it at a deep discount to generate desperately needed cash to stay in business.

But that brewhouse full of opportunity still sits on a impossibly distant farm, waiting for Kweza to come up with the money to first build the building that will house it then pay to have it make an epic journey to Kigali.

As Flynn explains, “It will go by truck to the port in CapeTown South Africa, then by sea around southeastern Africa through the Indian Ocean to either Mombasa, Kenya or Dar Es Salaam Tanzania, then overland in truck over the Masai Mara/ Serengeti, through Uganda, and into Rwanda to get to us!”

If the Indiegogo campaign fails, Kweza could wait an untold amount of time for funding that may or may not ever come.

But the appetite for supporting craft beer is much higher now than it was when Sonoma, California’s New Albion struggled unsuccessfully to survive the early 1980s on a hand-rigged system and a lack of outside funding. And the subsequent generations of drinkers around the world who’ve enjoyed craft beer because of New Albion’s efforts should certainly appreciate the parallels between the first “craft” brewery in America and the first craft brewery in Rwanda.

As Flynn says, “It brings a massive global industry to a personal level. It gives people a chance to interact with a familiar product – beer – but in a completely new way, with a new experience, and in a way that is localized, but commercial. Rwanda is very proud of ‘Made in Rwanda,’ and so we are working on producing what we hope will become a source of pride and a national beer, and something you can’t get elsewhere in the world.”

Why Private Label Brands Are Having Their Moment
Delta offers free flight changes over July Fourth weekend ahead of possible ‘operational challenges’
Could your flight be cancelled? Check the dates of summer strikes and disruption
The hidden spaces on planes that are off limits to passengers
Dow Plunges Nearly 500 Points, Recession Fears Resume As Consumer Confidence Hits New Low