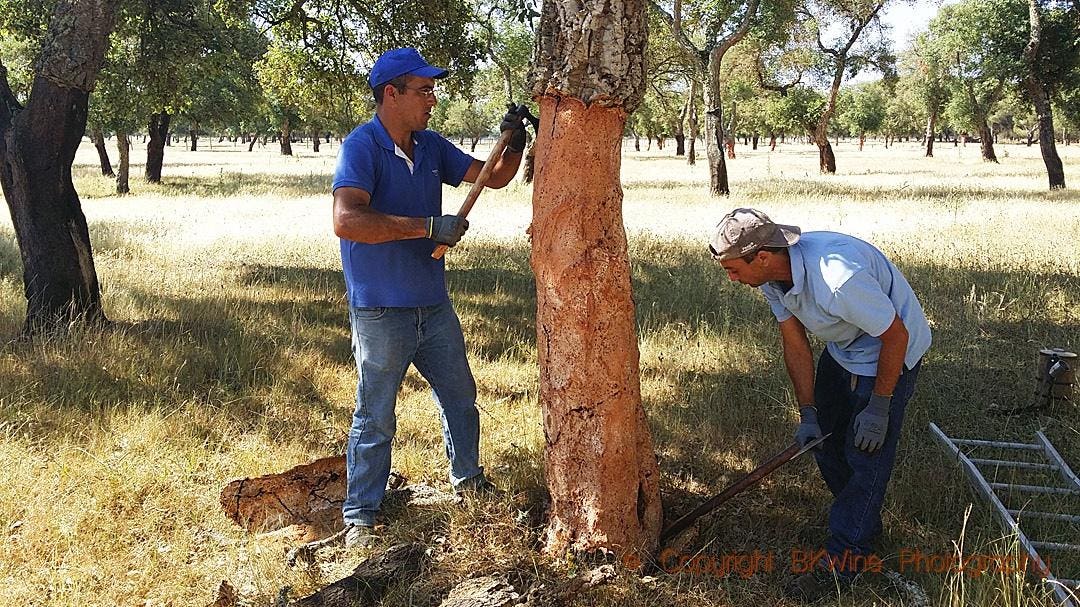 Outside the door to one of the wine shops in our neighbourhood is a small inconspicuous box. Here you can put your cork stoppers for recycling. We do it. And many French people also, because France is the leading cork stopper recycler of the world with around 45 million stoppers handed in and recycled every year.

Around 10-15 years ago, the recycling of cork stoppers began in earnest. Since 2018, 550 million corks have been collected worldwide for recycling, according to Amorim, Portugal’s and the world’s largest cork manufacturer. This is, however, only a fraction of the around 12 billion cork stoppers used every year.

Amorim is managing projects for recycling through various collaborations with associations, wine shops, restaurants, wine producers, etc., in different countries. From the proceeds from the sale of the recycled corks a portion is donated to charities and other organisations. Over 1.5 million euros have been disbursed to social causes, medical research and reforestation.

Several initiatives in various countries have emerged to encourage cork collection and recycling. The large British wine store chain Majestic has recently started a recycling campaign in all its stores. The aim is to collect one million corks a year. Nicolas, a French wine store chain (and provider of “our” box), has so far collected 16 million cork stoppers. The money they bring in is financing the planting of cork oaks in the southwest of France. 8,000 collected corks correspond to one tree planted (we are probably getting close to having planted at least one tree with the corks we’ve dropped in the box; can we perhaps get a name plate?).

Both producers and consumers still love natural cork. But of course, other closures, such as plastic stoppers and screw caps, take market share. But natural cork is environmentally friendly, and the cork oak forests are worth preserving.

The oak tree is an unusual tree. You can use it, “harvest” it, without cutting it down. You harvest only the bark, and fresh bark will grow in its place. You can harvest a tree between 15 and 18 times during its lifetime. A tree will live for between 150 and 200 years. Every piece of the bark you harvest is used; there is no wastage; if it is not used for cork stoppers it goes into other products. And cork can be recycled forever.

Recycled corks are used in various products. They cannot, however, be used to make new cork stoppers. But cork is a material with many other uses, in construction, for insulation, floor coverings, fire protection, furniture, shoes, in the car industry and even for aerospace parts. New areas of use are discovered all the time.

But, of course, a big piece of the cork industry’s revenues come from wine corks. If the wine industry abandoned the cork stopper in favour of other closures (which doesn’t seem imminent, I’m glad to say), people would be less inclined to look after the precious cork oak forests.

The cork oak grows mainly in the western Mediterranean area covering in total over 5.4 million acres. Portugal has the most extensive cork oak forest spreading over 1.8 million acres, most in Alentejo in the south. As a comparison, that is about the same area as all the world’s wine-producing vineyards (5.5 Mac) and all of Italy’s vineyards (1.8 Mac) respectively. Portugal is also the biggest processor of cork products, including cork stoppers. The remaining acreage is in Spain, Morocco, Algeria, Tunisia, France and Italy.

The cork oak is one of the richest ecosystems in the world. These forests have an astonishing diversity of plant life. In Portugal, they provide habitats for several endangered animal species, such as the Iberian Lynx and the Iberian imperial eagle. It is also an essential stopover for migrating birds. The trees absorb carbon dioxide. A cork oak regenerating its bark absorbs on average five times more than one from which no bark is taken.

In Portugal alone, the CO2 retained by the cork oak forests is equal to 5% of total CO2 emissions in the country, according to APCOR, Portugal’s association for cork producers.

The consequences would be drastic if the natural cork was to be discontinued on a large scale, says The World Wildlife Fund (WWF). In the long term, this would probably lead to the demise of the cork oak forests. We wouldn’t want that, not least because the cork’s acorns are food for the little black pigs that run around and eventually will be turned into the best dry-cured ham in the world.

Today, only 2-3% of all cork stoppers are recycled. We can do better than that. The more we recycle, the more highly valorized this extraordinary and exceptionally sustainable material will be.

Read also: Our interview with the CEO of the world’s biggest cork producer, Amorim, including a video.