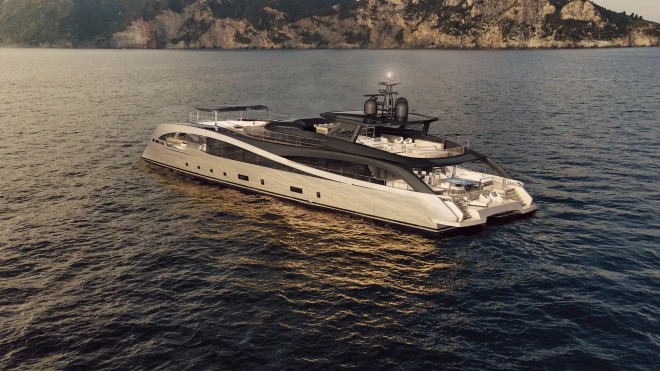 Italian shipyard Rossinavi unveiled its all-new fully-electric 42.75-metre catamaran concept during Miami Art Week. It has been named the Sea Cat 40 and is inspired by marine algae phytoplankton that converts sunlight into energy. It is fitted with 135 square metres of solar panels which generates 250kWh of energy.

The Sea Cat 40’s interior and exterior were developed by Rossinavi in collaboration with Fulvio de Simoni Yacht Design.

“The idea is to create a link between nature, electricity and futurism, which, supported by the most advanced technologies, is able to offer excellent performance to Sea Cat 40 that offers priority to the environment. A real challenge for the future of boating and a milestone for the shipyard,” says Federico Rossi, COO of Rossinavi.

According to the shipyard, the Sea Cat 40 has been designed for transatlantic voyages — able to cruise continuously for 20 days at eight knots, with a centralised A.I system that maintains the battery’s charge status to preserve power. The power banks are enough to provide 80 per cent of travel in full-electric mode, with the remainder relying on hybrid electric-diesel engines.

The Sea Cat 40 offers generous amounts of space, the open-plan saloon and dining area on the main deck measures 100 square metres. The catamaran will feature five staterooms on board, which includes a spacious master suite.

Its beach club hosts sun lounging spaces alongside a jacuzzi, with stairs leading down to the swim platform aft. Accommodation is for up to ten guests in five cabins found on the lower deck, with crew quarters for seven staff members in four cabins.

Rossinavi is committed to eco-sustainability and also driving educational changes in the industry, saying: “In the world of influencers, the wealthy and the billionaires give the common citizen a kind of ideal aspiration, which needs to go beyond the image of an extremely high-performance car, but totally heedless of the CO2 emissions it entails, otherwise, we risk giving the new generations that kind of ambition. If these influencers manage to change this approach we can really improve the world.”

HOBBITON SUNRISE
BOLLYWOOD DANCE LESSONS
Cold War warning sirens are sounding across France. Here’s why
How Traditional Cornish Pasties Are Made | Regional Eats
The hidden spaces on planes that are off limits to passengers