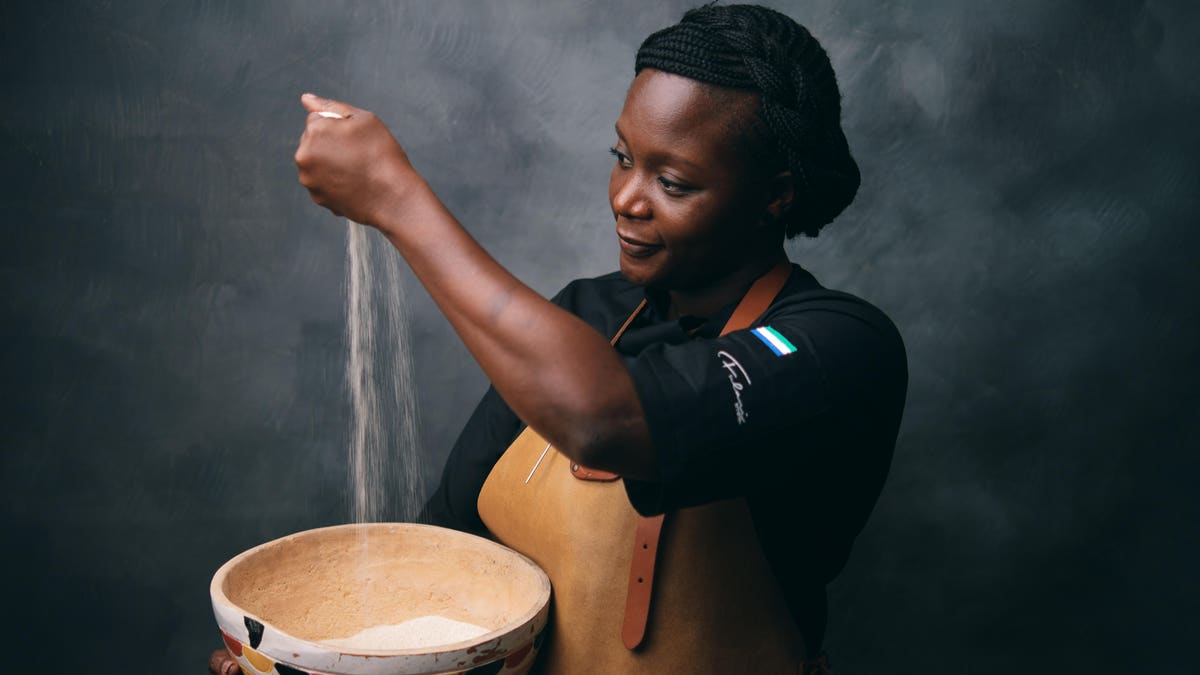 Resident at Palm Heights Hotel in the Cayman Islands, where she shares the beauty and the bounty of West Africa through the world-famous flavors of her Fulani Kitchen that she pairs with stories of her nomadic people and the rhythm of African beats, I am introduced to Chef Fatmata Binta.

“Binta” as she has asked me to call her, is all heart and soul and in her methods, she is effortlessly sustainable.

This is in no small part due to her Fulani heritage.

The Fulani consist of approximately 20 million people… pastoralists scattered across Western Africa… and are regarded as the world’s largest nomadic group. Fulani culinary culture— like Binta’s life— is a story of nomadism, adaptation, and survival. Just as Binta’s Fulani Kitchen pop up dinners have taken her all over the world on an intuitive journey, such is the story of her life— and the story of her people.

Binta’s parents were first generation Fulanis who moved to Freetown Sierra Leone from Fouta Djallon in Conakry, the capital of Guinea. As a member of a large family Binta’s life as a young child was one in which food always took center stage.

The family was always celebrating something and whether it was by peeling onions or scotch bonnet, as a Fulani girl, young Binta was always integrated in the culinary process— being groomed to take over a kitchen someday, in marriage.

“I vividly remember growing up in a space where food was a big deal. Food, community, culture, tradition had a great deal of depth. For my mom and my aunties, food was their entertainment. I woke up watching them doing the same thing every day— taking a basket to the market… I only now realize how sustainably they lived. Everything was carried in this one basket— never in plastic. They would come home with all of these colorful ingredients.”

And the way the food was eaten was also a beautiful rainbow of a production. No shoes, seated on communal mats, hands would become cutlery and ingredients would make appearances when seasons and circumstances would allow. For the most part, although they were pastoralists, their diets were largely plant based. This was where the young people learned their values.

Binta’s mother, Fatimatu Bah, had her own shop where she would sell “Fry Fry,” a street food, consisting of deep-fried delicacies such as snapper, plantains or Akara, a fritter made from black-eyed peas.

One of Binta’s most profound food experiences as a child was at the age of six-years old when she sustained third degree burns from a pot of hot oil that her mother had laid on the floor— an incident from which she was admitted to the hospital for two weeks and from which she still bears the scars.

“I should have known something when despite the pain from that injury, my love for food only grew stronger,” she laughs, as she pauses to show me the tell-tale marks on her hands.

Between the ages of eight and ten, Binta lived with her paternal grandmother, Kadijatu Bah, who owned a local restaurant and taught her the tricks of the trade, infusing within her the necessity of minimizing waste when cooking. If Binta even dropped one grain of rice on the ground, her grandmother would tell her that the rice would cry.

When Civil War broke out in Sierra Leone (1991-2002), an eleven-year-old Binta rejoined her mother in what would be a drastically different life— one in which food would take on a profoundly different role.

Life in a War Zone was not easy. It was unsafe to leave home and the family could no longer go to the market. Binta’s mother and aunts only had a handful of ingredients at their disposal.

Binta recounts the simplicity of the ingredients and how they would have to remove the cockroaches from the rice. Still, she says, “These were the best meals I ever had. I don’t know why, but it was the best.”

The experience would bestow her with two of the most poignant lessons that she continues to hold close to this day— food does not have to be complicated to taste good, and food has the power to create a bridge between people and communities.

At the age of twelve, the war became so heated that Binta would be forced to return to Guinea Conakry with her mother and her large community of three hundred to four hundred people, to a village that was so small that under typical circumstances it would have only accommodated a population half their size, but somehow they would have to find a way to make do.

It was then that food— making a lot out of a little—became more important than ever before. Being sustainable, doing everything from scratch, excited young Binta.

“We would have to go into the woods and collect firewood to cook… Water… we would have to walk a mile to the stream and carry it back on our heads. Everything was raw and organic. We had our own farm… our backyard gardens… if we wanted a sweet potato we just had to go and pluck it and bring it back to the kitchen. Every meal was prepared fresh and from scratch. But there were so many of us and we had to find a way to feed everyone. That was when my grandmother came up with the idea to grow fonio.”

It was here that a lifelong ambassadorship would take root and Binta would eventually make space for impacting the lives of others.

Fonio is West Africa’s oldest cultivated cereal and is known to be highly nutritious and high yielding with the ability to grow in harsh conditions and be harvested in as soon as 6 to 8 weeks— a sustainable solution to feeding many mouths.

The family began to make fonio in a variety of ways. As nomadic pastoralists, milking cattle was young Binta’s first chore of the day, which would then be used to make the butter in a creamy fonio porridge. Lunch and dinner consisted of other adaptations of the ancient grain.

At the age of thirteen, Binta would return to Freetown where she would begin school and later, attend university where she majored in International Relations. Here she would reconnect with her family’s culinary traditions, making home cooked meals for her peers who would eagerly pool resources to purchase ingredients for their talented friend.

Binta’s nomadic journey would then take her to Spain where she would dabble in cooking as a means of making ends meet and later, in 2014, when the Ebola epidemic took over in Sierra Leone, she would relocate to Accra Ghana where she made the decision to attend culinary school. This decision would take her to the Kenyan Culinary Institute in Nairobi, Kenya.

Binta worried that her mother would not approve of her choice to go to culinary school— to choose food as a career. “I was worried that she would not find it to be sustainable,” she says.

Ironically, sustainability and her family heritage would be at the forefront of her culinary practice.

Upon her return to Ghana after graduating from culinary school, Binta found that rigid commercial jobs in the hospitality sector were not a good fit for her nomadic soul. She also began to take note of the fact that her beloved African culinary traditions were gradually fading away— and particularly those of the Fulani people.

She had to do something.

“People only know of the Fulani as herdsmen. They are sterotyped and looked down upon,” she declares. “Growing up as a Fulani girl I know how beautiful these people are; they are hospitable people. It was important for me to tell their stories and change the narrative.”

That was when Binta took a leap of faith and quit her job. She decided to devote herself to understanding more about the vast and diverse culture of her Fulani people so that she could educate the world.

As a speaker of a common language Binta was accepted, and would spend several days at a time, living among and cooking amid groups, documenting their recipes. She would return to Accra and host dinners inspired by her trips.

And with each time that Binta returned to her Fulani people, she grew more certain that there was something there that the world could learn from— there were lessons in sustainability that had to be told.

At first, her dinners did not take off as she had hoped and she would invite her friends to experience the food and newfound recipes that she had acquired so that they would not go to waste.

Her mother was understandably concerned.

“She didn’t get it. She would call me in the morning and ask me if I was sure if this was what I wanted to do… But I couldn’t let the memories of my childhood fade away. And I had to change the narrative of my Fulani people.”

Her moment would soon come.

Binta’s breakthrough came when a group of Yale students who were visiting Africa attended one of her events. While they did not pay for the three-course meal, word spread, and her leap of faith paid off.

Luckily, her mother was able to see her achieve some of her success before she passed away.

In addition to global publicity and acclaim, Binta was honored as the Rising Star Winner at the 2021 Best Chef Awards

”The award is just to highlight your work, but the work continues,” she proclaims. ”It is a motivation for me to work harder. It is my responsibility as an African chef to be an ambassador for where I am from; to put it on a global stage without it being diluted. For as long as I’m here I want to stay authentic.”

Not to be tied down to routine, Binta has already begun to take the next steps in the journey of her life’s work. Plans toward a Fulani Culinary Village with a test kitchen are underway in Ghana, where people will have the opportunity to learn about and be inspired by the Fulanis.

In the meantime, the Fulani Kitchen continues to make stops in Africa, North America, Europe and now the Caribbean.

Seated among groups and couples— people from different backgrounds and cultures— I am a party of one at Tillie’s restaurant in the Cayman Islands but somehow I am embraced and accompanied by this generous 5 course meal and an animated air of anticipation. I explore the diaspora of West African cuisine, a merger of African ingredients that have found a unique home in harmony with the bounty of Cayman’s produce and I immediately shift gears from self-conscious to soulfully sustained.

Chef Binta takes center stage before the party of onlookers, taking avid listeners on a multi-sensory journey down the roads of her past, where food came from her back yard and her mother’s Fry Fry was the talk of the town.

“I value food so much. It is sacred and powerful. Food is the universal language that breaks down barriers— it is the universal connector,” she says. “It is very important to me that anyone who sits on my mat leaves as an ambassador for the Fulani people.”

If only Fatimatu Bah could see her now.