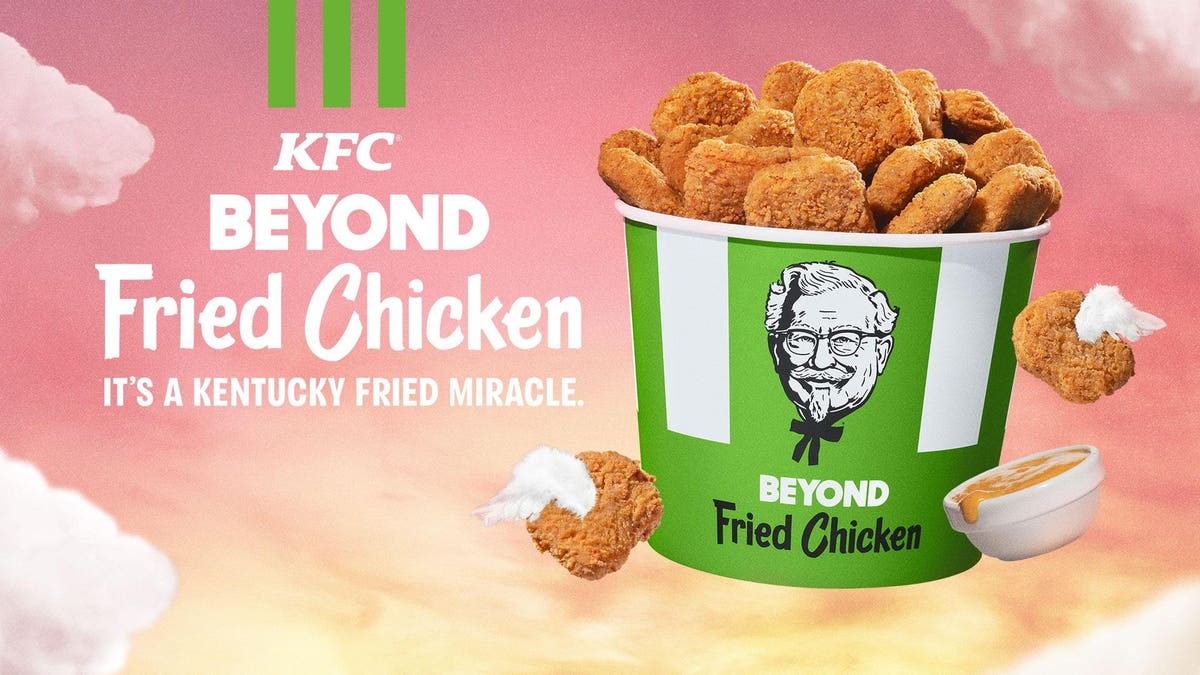 KFC is ready to bring its buzzworthy Beyond
Fried Chicken to the masses after over two years of testing. Starting Jan. 10, the plant-based menu offering, created in partnership with Beyond Meat, will be available at participating U.S. restaurants.

That partnership began all the way back in August 2019 with a Beyond Fried Chicken test at a single restaurant in Atlanta. The product sold out in five hours and generated 2 billion media impressions, providing more than enough confidence for KFC to expand the test to about 65 restaurants in February 2020.

Let’s just say things have changed quite a bit since then.

Driven by the COVID-19 pandemic, inflationary pressure on traditional proteins and a climate in crisis, demand for plant-based options has accelerated beyond anyone’s imagination. In 2019, the plant protein market was experiencing a material, novelty-driven growth trajectory and was projected to grow to a $140 billion category by 2030. That forecast has since been adjusted to over $162 billion, which would make up nearly 8% of the entire protein market.

KFC is clearly taking advantage of its deep relationship with category leader Beyond Meat to ride this trend. In February 2021, parent company Yum Brands
announced a strategic partnership with Beyond Meat that included the co-creation of exclusive plant-based protein menu items. Sister chains Taco Bell and Pizza Hut have since started experimenting with Beyond options, but KFC had already established first-mover status in the chicken analogue space with its sellout debut in Atlanta.

During a 2019 interview, KFC President Kevin Hochman said “democratizing” the product for everyone was important for the brand to be at the forefront of the plant-based trend. Rolling it out to a nearly 4,000-unit system is a good way to achieve such democratization.

Indeed, this nationwide rollout further solidifies the brand’s leadership position as the plant-based chicken category remains a wide-open opportunity. According to a new report from Rabobank, Jack in the Box
is the only other QSR or fast casual chain to trial plant-based chicken, with its limited-time sandwich supplied by Tyson Foods
’ Raised & Rooted.

Notably, KFC’s relationship with Beyond has yielded product improvements throughout the past two years. That initial 2019 test featured the first iteration of Beyond Fried chicken, for example.

“Since, Beyond Meat and KFC have worked very closely to evolve Beyond Fried Chicken, bringing it even closer to its animal protein equivalent. The current Beyond Fried Chicken recipe, which is the same version tested in 2020, is designed to deliver on the taste and texture of whole muscle chicken and was inspired by KFC’s famous fried chicken,” according to a KFC spokesperson.

As more consumers pledge to skip traditional protein in January (or “Veganuary” as it’s so called), KFC could generate more frequency with the timing of its launch. It will also likely generate more traffic from the growing flexitarian demographic who would have never previously considered KFC and who otherwise have few quick-service plant-based options. Such frequency and traffic can drive topline growth for the chain already experiencing significant momentum.

Further, the launch of a plant-based option could help the company gain favor from those mindful of “Environmental, Social, Governance” efforts. JP Morgan shows that a majority of investors view the pandemic as a likely positive catalyst for ESG efforts and that stakeholders are “increasingly pricing in sustainability preferences.”

According to J.P. Frossard, author of the Rabobank report, plant-based products represent a “relatively simple, off-the-shelf way to show stakeholders that corporations are doing their part and are walking away from being labeled as unhealthy, outdated and uncommitted to sustainability practices.”

Prices of the Beyond Fried Chicken option start at $6.99, plus tax, and vary by location. The product is available as a combo meal with the chain’s Secret Recipe fries and a medium drink, or a la carte in six or 12-piece orders.

3 New Non-Alcoholic Beverages To Try This November
The best accommodation in Passo Tonale
The best hotels near Oxford Street in London
Hoping to beat the tourist crowd on your trip to Japan? That ship has sailed
Michelin Green Star Awarded To Unique Restaurant Aimed At Substance Abuse Recovery