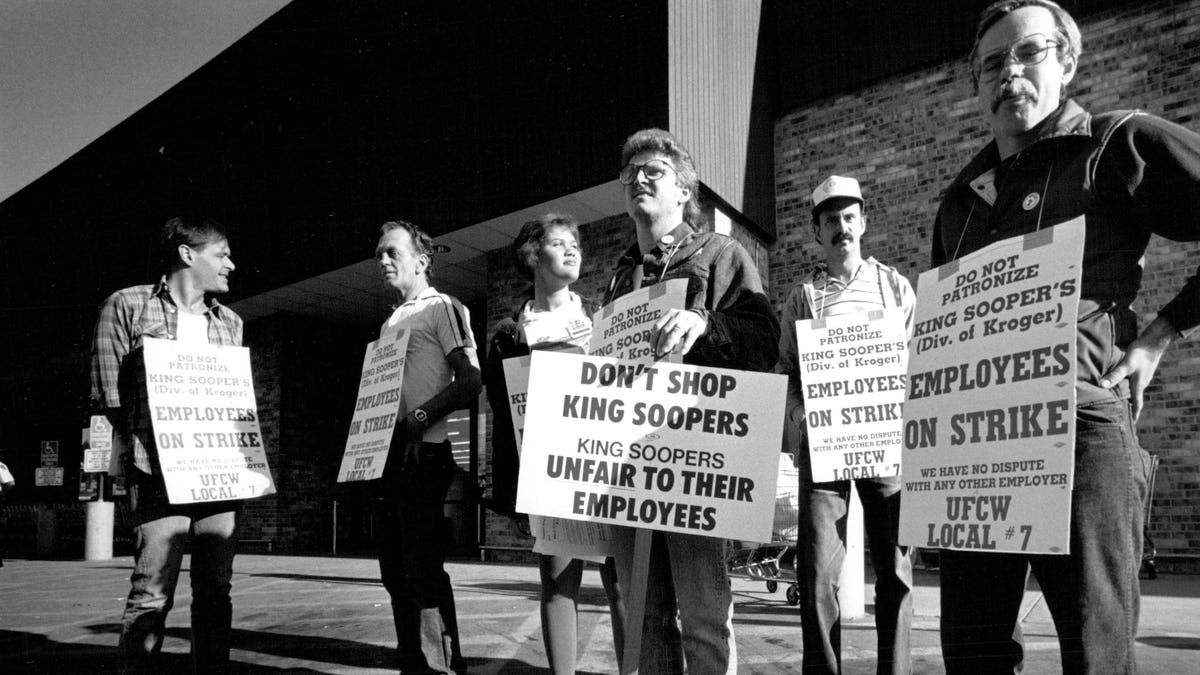 Over 8500 grocery workers at over 80 King Soopers/City Market locations in Denver and Colorado Springs are going on strike this Wednesday January 12th. The negotiations between UFCW Local 7 and Kroger
owned chain have reached an impasse, with the union rejecting the latest company offer. The union has also commissioned a timely report on the poverty, food insecurity and homelessness affecting Kroger workers in multiple cities, providing crucial context for the hard line that the bargaining unit has struck at the urging of their members.

After 17 hours of negotiation last Wednesday January 5th, UFCW rejected a $148 million investment from Kroger in wages, signing bonuses and benefits, according to a statement from King Soopers. The union, which is pushing for materially better wages, pension and health benefits, has countered that the proposed agreement includes numerous concessions. This includes an unpopular multi-tiered wage system, where some workers would get paid significantly less for doing the same work as others.

“King Soopers/City Market has followed the law and has not received any notice of wrongdoing from the National Labor Relations Board,” the company said in a statement. “King Soopers/City Market remains focused on the bargaining process and is committed to negotiating in good faith and settling a contract that is good for our associates while keeping groceries affordable for our customers.”

At the heart of the issue in Colorado is whether or not grocery retail employment can provide living wages and fulfilling career paths for workers. A new report commissioned by several UFCW locals sheds critical light on the lives of the racially diverse Kroger workforce. Entitled “Hungry At the Table”, the white paper is the largest such research project yet, surveying almost 37,000 workers in Colorado, Seattle and Southern California. The takeaways are startling:

·      Over three quarters of Kroger workers are food insecure, over 7 times the national average. This means they cannot afford a healthy, balanced diet, they run out of food between paychecks and they regularly skip meals.

·      9 out of 10 workers report that their wages have not increased as much as basic expenses; adjusted for inflation, since 1990 Kroger clerks have seen an 11-22 percent decline in wages. Nearly two thirds of Kroger workers face frequent economic hardship, particularly workers in their 20’s, with over 50% unable to afford rent.

·      85 percent of Kroger workers who are single parents are food insecure and cannot afford to provide enough good food for their kids.

·      14 percent of Kroger workers have experienced homelessness in the past year, 36 percent worry about being evicted and 44 percent live in inadequate housing.

·      Kroger’s just-in-time labor scheduling is another stressor, with over half of workers having different schedules every week and the majority getting little notice of when their schedules will change. Only 16 percent work fixed schedules.

·      Over two thirds of workers had difficult customer interactions during the pandemic, one quarter were confronted by customers threatening violence and over a fifth experienced violent incidents at their stores, capped off by a deadly mass shooting at a local King Soopers in March 2021.

Kroger has been among the most successful food companies during the pandemic. The broadline retailer has rapidly innovated to stay ahead of trends, from supporting more diversity in their supplier community, to developing a leading private label assortment and healthier food options, to omnichannel ordering and fulfillment strategies, such as Vitacost and their Ocado partnership. The Cincinnati based grocer captured nearly 10 percent of the industry sales volume, second only to Wal-Mart. Kroger clocked 8 percent sales growth to $132 Billion in sales, with over $2.5 Billion in net income in 2021, on top of the $1.7 Billion in 2020. The retailer has recently distributed 2 billion dollar rounds of shareholder buybacks to investors and executives years and their CEO earned over $22 Million in compensation, over 900 times what hourly wage earners took home annually.

But the “Hungry At the Table” report makes some recommendations that would provide some measure of economic justice and security to workers without sacrificing any of Kroger’s competitive edge:

·      Increase minimum pay to $45,760 annually, a modest amount to survive in Seattle, Denver or Los Angeles and a significant increase from the average earnings of just under $30,000 annually.

·      Subsidize childcare for workers with children under 12

·      Provide 2 board seats for unionized employees, elected by the rank and file

In a time when over 4 million Americans are quitting jobs and changing careers every month, including over 4% of retail workers, America’s largest full service grocer has the unique opportunity to redefine the value of retail workers. The UFCW contract negotiations may be localized to Denver and Colorado Springs, but the implications are nationwide.