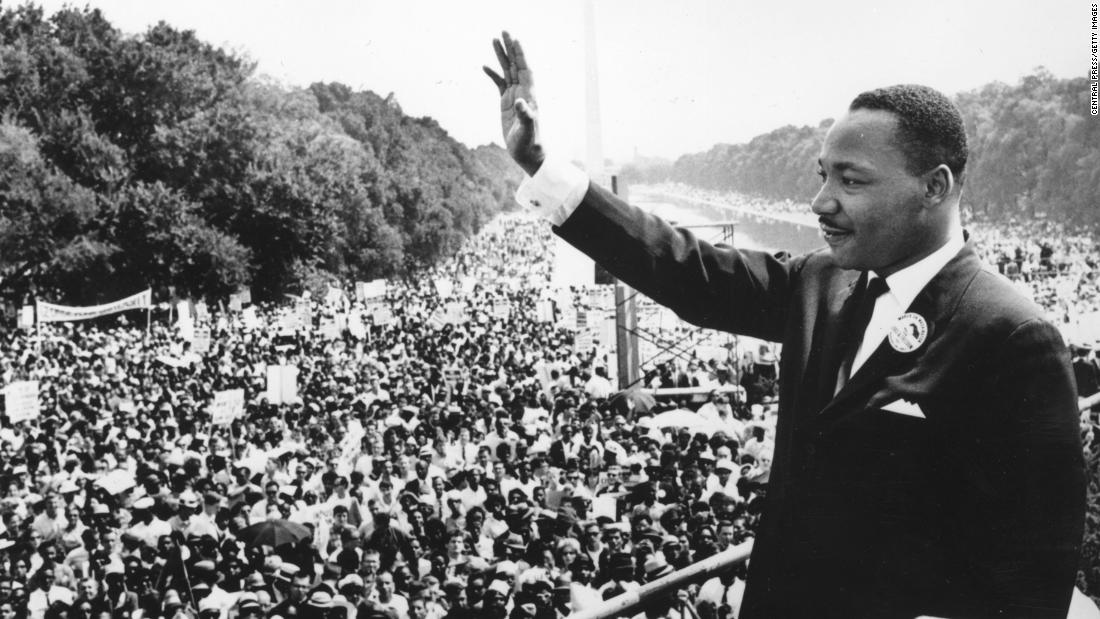 Editor’s Note — Because of the continuing Covid-19 pandemic, some of the indoor venues mentioned in this article could be closed or have limited capacity. Be sure to check their websites or call before you make travel plans.

(CNN) — Martin Luther King Jr. was born and raised in the American South, but his dream of racial equality and social justice reverberated out of his region, into the whole country and around the world. And it just wasn’t his vision that spanned the globe — the man himself embarked on travels far and wide.

You can honor him on Martin Luther King Jr. Day (Monday, January 17) — or any other time of year — by walking in his footsteps figuratively or literally.

From his homeland in the heart of the South to unexpected destinations far beyond America’s shores, here are the places that shaped and inspired the man:

Historic Ebenezer Baptist Church is one of Atlanta’s most cherished sites.

Georgia’s busy capital city is King’s birthplace and his final resting place. As such, it probably has the biggest claim on his legacy and MLK-related sites.

Many of them are clustered together at the MLK Jr. National Historical Park in the Sweet Auburn neighborhood of downtown Atlanta. Interior tours of buildings in the park are temporarily suspended in accordance with CDC guidance (as of January 11), but you are still free to take a self-guided outdoor tour, including the tombs for MLK and Coretta Scott King.

Some of the highlights include:

— Historic Ebenezer Baptist Church: This is where MLK was baptized and where he co-pastored with his father starting in 1960. It’s been magnificently restored inside and out to how it appeared in the 1960s and is an ideal place for prayer and quiet reflection. 407 Auburn Ave. NE, Atlanta, GA 30312; +1 404 688 7300
— MLK Birth Home: You can still see the exterior of the two-story house where MLK was raised, when Sweet Auburn was the epicenter for African American life in Atlanta. 501 Auburn Ave NE, Atlanta, GA 30312; +1 404 331-5190
— The King Center: Coretta Scott King established the The Martin Luther King Jr. Center for Nonviolent Social Change in 1968. Almost 1 million people would visit annually pre-pandemic to learn more about the Kings’ public and private lives and to pay their respects at their tombs, the reflecting pool and the eternal flame. 449 Auburn Ave. NE, Atlanta, GA 30312; +1 404 526 8900
Just a few miles away, prestigious Morehouse College is King’s alma mater. (In fact, MLK Jr. was one of numerous King family men to attend college there). The campus grounds are a lovely place to take a stroll where the young collegian walked. 830 Westview Dr. SW, Atlanta, GA 30314; +1 404 215 2608

For a city of its size, Memphis has an outsized influence on the nation’s musical, cultural and political history. The United States was deep in turmoil and scarred by violence when King came to Memphis in March 1968 in support of striking sanitation workers.

King and his group were booked at the Lorraine Motel, a safe and welcoming place to stay for black travelers at the time. On April 4, King was standing on the balcony outside of room 306 when he was shot and killed.

Today, the Lorraine is the site of the National Civil Rights Museum, where you can learn about the broad sweep of civil rights history as well as see the room where the man who changed America spent his final living hours. On the Monday holiday, the museum will open at limited capacity for extended hours, and admission will be free for all guests. Reservations required. 450 Mulberry St., Memphis, TN 38103; +1 901 521 9699
If you would like to also like to eat where King often broke bread, visit the soul food restaurant The Four Way. Opened since 1946, it serves Southern favorites such as fried chicken, turnip greens and lemon meringue pie (said to be an MLK favorite). 998 Mississippi Blvd., Memphis, TN 38126; + 1 901 507 1519

Civil rights lawyer Bryan Stevenson shows CNN’s Nia-Malika Henderson around a memorial and museum in Montgomery, Alabama that names some of the over 4,000 lynching victims in America.
It’s difficult to overstate the impact of King’s time in the segregated capital of Alabama during the mid-1950s. His coordination of the long bus strike after Rosa Parks famously refused to yield her seat put him on the national and international map.

You can also see the exteriors at these King-specific sites:

— Dexter Avenue King Memorial Baptist Church: This church was founded in 1877 in a slave trader’s pen and was originally called Second Colored Baptist Church. King served as its pastor from 1954 to 1960. It was from here he planned the bus boycott and other efforts to dismantle segregation. 454 Dexter Ave, Montgomery, AL 36104; +1 334 263 3970
— Dexter Parsonage Museum: This is the clapboard house where King lived — and which was bombed several times during the civil rights struggle. 309 S Jackson St, Montgomery, AL 36104; +1 334 261 3270

The Birmingham Civil Rights Institute has the jail door from King’s incarceration.

The industrial powerhouse of the South and a bedrock of integration opposition in the mid-20th century, Birmingham also figured prominently in King’s life.

It was from Alabama’s largest city, after all, that he penned his famous “Letter from a Birmingham Jail” in 1963, in which he passionately defended nonviolent civil disobedience to skeptical white ministers who questioned his tactics and perceived impatience at the pace of change.
You can see the actual door from his jail cell at the Birmingham Civil Rights Institute as well as important documents and oral histories from the civil rights movement. It’s open with limited hours and Covid-19 precautions in place. 520 16th St N, Birmingham, AL 35203; +1 205 328 9696

You’ll find The Martin Luther King Jr. Memorial on the National Mall between the Lincoln and Jefferson memorials.

It now seems inevitable that King’s march for justice took him beyond the Deep South to the nation’s capital. Here are some places you can visit:

— Martin Luther King Jr. Memorial: The first memorial to honor an African American individual on the National Mall, it opened to the public in 2011 and features a powerful 30-foot statue of King emerging from boulders. You can also read inspirational quotes made in carvings on the site. The National Park Service says masks are required in crowded outdoor spaces. 1850 West Basin Drive SW, Washington, DC 20024 (closest Metro station is the Smithsonian)
— The Lincoln Memorial: Fittingly, it was from the steps of this beloved memorial that King gave his most famous speech — “I Have a Dream.” Sit on the steps, close your eyes and just imagine the atmosphere there on August 28, 1963, as more than a quarter of million people filled the National Mall to hear what became one of the most important speeches in US history. 2 Lincoln Memorial Cir NW, Washington, DC 20037
— The National Museum of African American History And Culture: The museum made an excellent addition to the capital’s many fine institutions when it opened in 2016. The museum contains artifacts directly related to King as well as a sweeping look at the contributions and tribulations of black Americans. 1400 Constitution Ave NW, Washington, DC 20560; +1 844 750 3012

Coretta Scott King unveils a bas relief of her late husband at the Mugar Memorial Library on the Boston University campus.

While several cities in the South claim part of the King legacy, it may surprise some folks to know that Boston, that bastion of New England, also was a key place in shaping his life.

Before returning to the South, King attended Boston University in the early 1950s. Just as you can walk in the undergraduate’s footsteps at Morehouse in Atlanta, you can do the same for grad student King at BU. 771 Commonwealth Ave., Boston, MA 02215; +1 617 353 3710
You may want to go to the grounds of the impressive Massachusetts State House, where King addressed a joint session of the legislature in April 1965. 24 Beacon St, Boston, MA 02133
A 22-foot memorial called The Embrace is slated to be dedicated in 2022 in Boston Common park to commemorate MLK and Coretta Scott King. This is the city, after all, where they met and where they began married life.

Did you know you can combine a Bahamas getaway with an MLK Jr. history tour?

Combine a gorgeous island getaway with some MLK history on Bimini, the western most outpost of the Bahamas and just 50 miles off the coast of Florida.

King would come here to relax and craft his speeches, including notes for his Nobel Peace Prize acceptance speech he gave in Oslo, Norway, in 1964.

CNN Travel’s Lilit Marcus reported in a 2018 article that “there are two busts of King on the island — one in front of the Straw Market in the center of Alice Town and one among the very mangroves where King spent so many peaceful afternoons.”

A visit to the Cape Coast Castle in Ghana is a painful but necessary reminder of the Atlantic slave trade that went on for centuries.

The civil rights struggles in the United States and the end of colonialism in Africa came at the same time and naturally the movements dovetailed.

In 1957, the Kings went to Ghana in West Africa to attend its independence ceremony from Britain, according to the King Encyclopedia at Stanford University. In the capital of Accra, he met then-Vice President Richard Nixon, among others.
His first overseas trip, Ghana a profound effect on King. Upon his return to the United States, he said, “Ghana has something to say to us. It says to us first, that the oppressor never voluntarily gives freedom to the oppressed. You have to work for it.”
Before the pandemic, Ghana was emerging as a prime tourist destination not just in West Africa but the entire continent. It is open to US visitors. While many people come for the beaches, wildlife and food, it also holds important historical sites.
That includes Cape Coast Castle, which was a hub of the transatlantic slave trade. A visit there is a somber reminder of centuries of oppression and its ramifications during MLK’s time up to today. Victoria Road, Cape Coast, Ghana, +233 57 710 1707

If you visit Mani Bhavan, the museum that was once Mahatma Ghandhi’s center of operations, you’ll have once again walked in the footstepls of MLK Jr.

In February and March of 1959, King embarked on a five-week tour of India to learn more about the movement that inspired him. In Delhi, he met with Prime Minister Pandit Jawaharlal Nehru, among others. He talked with students at New Delhi University.

Eventually he made his way to Calcutta (now called Kolkata), India’s intellectual center. Martin Luther King Sarani, a street named for him in the heart of the city, is not far from the Victoria Memorial.

If you’re simply not able to make it to any of these places in person this year, trace the journeys of King online at Stanford University’s extensive King Institute. It’s a deep dive into his life, yet easy to navigate.
This article was originally published by Cnn.com. Read the original article here.
Share on Facebook
Share on Twitter
Share on Pinterest
Share on LinkedIn

This man and his dog spent seven years walking around the world
SETTLING IN OUR HOME!
DRONE OVER SURFERS – Bali Day 2
SHALL I SWAP TO PC?
The 10 most glorious European lakes you’d never thought to visit