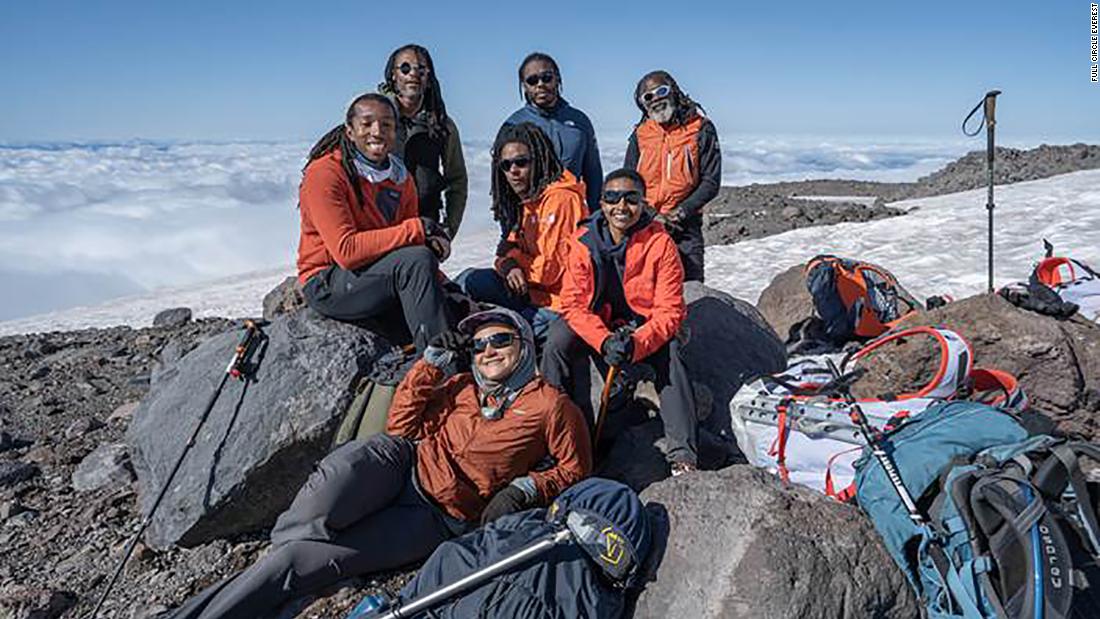 That is one of the reasons that Full Circle, a group of Black climbers and mountaineers, was formed.

“It is an expedition that is certainly about climbing. It is about spending time in the mountains, but it is also about building community, global community. And it’s about changing the narrative for the Black community, particularly in the United States and how we interact with outdoor spaces,” says Rosemary Saal, a member of Full Circle.

Saal is used to scaling literal and metaphorical heights. She was a member of an all-Black team that summited Denali in Alaska and another that reached the top of Mount Kilimanjaro.

But being part of Full Circle, she says, is different. The mountaineering community is relatively small, and Everest is the name that nearly everyone in the world can recognize.

Dione lives in Fort Lauderdale, Florida, where she owns and operates Coral Cliffs Climbing Gym. As one of only two Black women in the United States to own a climbing gym, she’s passionate about giving women of color ways to see themselves in the outdoors.

“The goal (of Full Circle) is to demystify this process,” Dione says. “Regardless of the mountain in question, the real goal for us is about reverse engineering things for folks.”

The mountain is the metaphor

One critical element of Full Circle’s work is being respectful to the local Nepalis and to the Sherpas who accompany climbing groups on their ascents.

Full Circle has vowed to pay the Sherpas more money than they usually make, knowing that these men are often supporting entire families or communities based solely on their mountaineering income, yet they are often relegated to the role of extras when it comes to handing out accolades.

Take the most famous Everest climb, for example — it was Sir Edmund Hillary who got the lion’s share of attention in 1953, with his Sherpa guide and colleague Tenzing Norgay’s name not added to the record books for decades.

In addition, Hillary was referred to as the first person to climb to the top of Everest, even though there were many accounts of Sherpas reaching the highest peak before foreigners had ever set foot in the country.

Dione notes that Full Circle aims to “de-colonize” Everest climbs. It isn’t just about increasing the visibility of mountaineers of color but about using inclusive language.

“Our goal here is to help folks aspire to have a profound and respectful relationship with the outdoors and feel not entitled to it, but welcome to it. If you see it can be done, you can do it right.”

Saal, who is biracial, says that some of the first people to push back on her childhood interest in sports and the outdoors were in her own community.

Luckily, there were community groups in her native Seattle that helped young Saal pursue her interests. In those groups, she saw educators from a wide variety of racial and socioeconomic backgrounds, and they helped to quiet the voices that told her it couldn’t be done.

For Dione, there were additional questions about women in the outdoors that she couldn’t find good answers for.

“What is it like to menstruate at 6,000 meters and above?” she asks aloud.

Both women cite Phil Henderson, founder of Full Circle, as a major inspiration.

Henderson’s nickname is Uncle Phil, after the character who mentored Will on “The Fresh Prince of Bel-Air”.

And his avuncular nickname is well-earned. California native Henderson has been a pioneer for Black men and women in the outdoors. He led an all-Black climbing team to the summit of Mount Kilimanjaro and is a longtime instructor at the National Outdoor Leadership School (NOLS) in Wyoming.

Like many young Black men, Henderson was encouraged to participate in team sports. He excelled at football, but a knee injury ended his NFL dreams. From there, he pivoted to a love of outdoor sports.

In 2000, Henderson led an all-Black climbing group to the top of Mount Kenya. The experience was transformative — he was leading not only a literal adventure but a new generation of Black outdoor experts.

“There is representation of Black people in mountaineering, climbing and the overall outdoor industry,” he wrote on Instagram, “but our stories are not being told.”

He is the only member of the team to have previous Everest experience: In 2012, Henderson was the lone Black member of an American climbing expedition at the world’s highest peak, which he refers to by its traditional Tibetan name of Chomolungma.

The group of nine climbers arrived in Nepal in January 2022 to begin the altitude acclimation process.

Should all of Full Circle’s members complete their climb, the number of Black people to have reached the top of Mount Everest will double immediately.

The costs that come with climbing the world’s highest peak can be prohibitive.

But the cost of blazing a trail is invaluable.

Cold War warning sirens are sounding across France. Here’s why
The hidden spaces on planes that are off limits to passengers
Could your flight be cancelled? Check the dates of summer strikes and disruption
The world’s most liveable cities for 2022
The adventurer twins exploring the most remote parts of the world