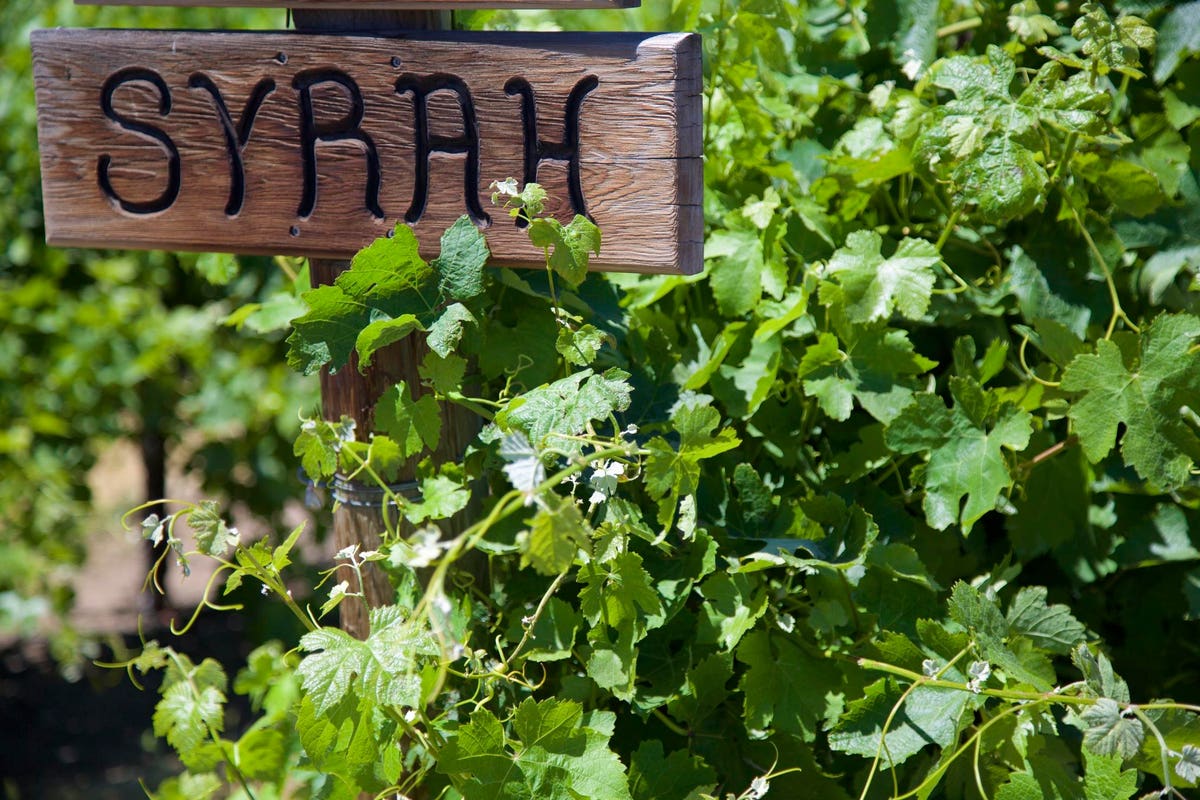 This weekend we’re playing with the idea of tasting the component grapes of wines from the Côtes du Rhône, with the twist of tasting them one by one rather than blended together as usual.

This experiment isn’t scientific or perfectly constructed, in that it’s unusual to find a wine made from, say, one hundred percent Carignan or Counoise (even the Carignan example in the first post of this series was made from only 70 percent of that grape). In addition, the four bottles in this series — Mourvèdre, Carignan, Grenache and Syrah — were produced in four very different parts of the world: California, Texas, Australia and British Columbia, respectively.

For those reasons, this is far from a “perfect” experiment.

Nonetheless, it’s an interesting and fun game to liven up this weekend’s wine experience, especially one that will be snowy or bitterly cold for a good part of the country. Also, the game begs the question of whether these grapes are worth singling out. Historically, in France’s Rhône Valley, they play well with others and their complementarity defines wines from that region. What happens when they’re given a chance to fly solo?

Give it a try and find out for yourself. Stay warm, get curious, and open a bottle or two from the list of Rhône varieties that have long made that region’s wines noteworthy.

Following up on the previous post’s focus on Mourvèdre and Carignan, we turn next to Syrah and Grenache. Full disclosure: These are two of my favorite grapes, period. A 2007 Syrah from the Stagecoach vineyard on Napa’s Pritchard Hill is easily one of my top five wines of all time, and Grenache in the hands of Tara Ochota from Australia’s Adelaide Hills is as wiry, vibrant and irreverent as the man himself was.

That’s exactly where we’ll begin with these next two individual expressions of grapes that comprise Rhône-style blends.

Grenache is the most wide-grown grape variety in the Rhône Valley, and it’s easy to understand its appeal worldwide also: vigorous, versatile and adaptable to a range of soil types, including those in Ochota’s McLaren Vale region, located about 20 miles south of Adelaide in South Australia.

The 2018 “Green Room” from Ochota Barrels, which I opened for this experiment, is a blend of Grenache (92 percent) and Syrah (eight percent), from a single vineyard planted in 1946. It is popular, fresh and “smashable,” full of raspberry, gentle spice and charm. It’s easy to describe Ochota’s wines as “avant garde,” much like Ochota himself which I described previously as “edgy and alive, eccentric and raw, yet deeply compelling and immediately identifiable as the über-natural expression of this place and this point in time.”

The Distraction of Syrah’s Aroma

It’s the aroma and the nose of Syrah that I find truly compelling and beguiling, most particularly in the style of a winemaker and viticulturalist like Severine Pinte at Le Vieux Pin in the South Okanagan region of British Columbia, Canada. Not surprisingly, perhaps, Pinte specializes in Syrah with a touch of Viognier, which is a classic combination in her native southern France. She has also pursued the study of that blend in Western Australia and other techniques in Bordeaux and the Languedoc.

The aroma wins, though, with her Syrah-based wines at Le Vieux Pin. It took putting my nose into Pinte’s 2017 “Cuvée Violette” (which contains 99.5 percent Syrah plus that 0.5 percent delicate accent of Viognier) for my wine lexicon to truly register the musky sweetness of “violet.” I drink the wine, of course, and I can understand why the cellar staff at Le Vieux Pin joke that this is “Syrah for Pinot Noir lovers,” with its crunchy bramble fruit. But I’m not shy to admit that I continually want to smell it even more than taste it. The aroma is that distracting. It also, for me, represents some of what Syrah adds as a component to Rhône-style blends.

SETTLING IN OUR HOME!
JetBlue ups offer for Spirit Airlines as shareholder vote on Frontier bid nears
This man and his dog spent seven years walking around the world
Lufthansa is bringing back the A380
Could you land a plane in an emergency?