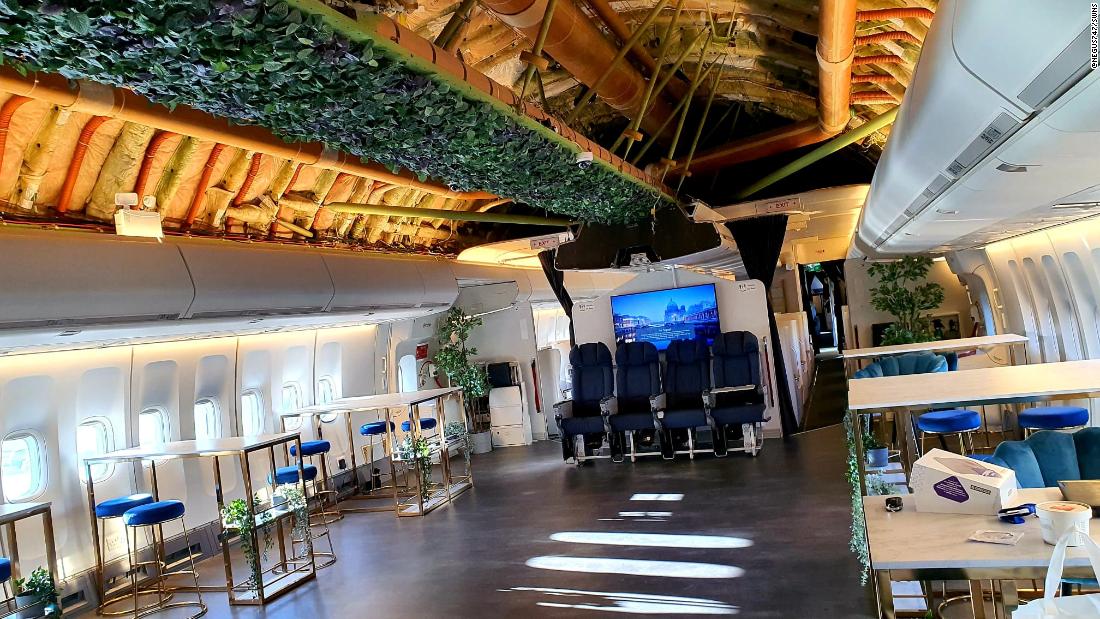 (CNN) — There are many different places a retired plane can end up in its after life.

Some return to the sky to fly for other airlines, others are recycled for parts (around 80 to 85% of an aircraft can be recycled) while a vast number are relocated to aircraft boneyards.

One particular decommissioned British Airways jet is gearing up for a very action-packed future after being reborn as a unique events space for hire based at a UK airport.

Suzannah Harvey, chief executive of the privately owned Cotswold Airport near Kemble in England, bought the Negus 747 for £1 (around $1.30) back in October 2020 and has spent 14 months or so converting it into a trendy “party plane,” with rates starting at about $1,300 an hour.

A vast number of 747s have been decommissioned as airlines bring forward retirement dates for older aircraft due to the pandemic, with KLM, Air France, Delta, United and British Airways all retiring their 747 fleets in the past two years.

Harvey came up with the idea for the events facility as various retired BA 747s arrived at storage and parts company Air Salvage International, which happens to be located at Cotswold Airport, and promptly went to the UK flag carrier with her proposal.

However, the process was far from simple. In fact, the sale involved weeks of negotiations during which BA agreed that the economy section of the plane could be removed and Harvey vowed to ensure that the aircraft would be well looked after.

“It took six weeks to do the negotiations for the contract,” Harvey tells CNN Travel. “We have a duty of care to maintain her until it is uneconomically viable with any deterioration. But hopefully, she’ll be with us for many years and generations to come.”

According to Harvey, BA allowed Cotswold Airport to choose from its fleet of retired 747s, and they opted for an iconic Negus.

The economy section has been completely stripped out, along with the ceiling panels and luggage compartments.

“I think it’s the most beautiful one they’ve ever produced,” she says.

But it was once the team had signed on the dotted line that the hard work truly began. While much of the aircraft looks the same, including the livery and the cockpit, the economy section has been completely stripped out to create a party room and the galley has been restyled into a bar.

In addition, the entire plane has been rewired with custom lighting in order to replicate the original onboard system while on the ground, as well as mains power.

The ceiling panels in the economy section have been removed, along with the central luggage compartments, providing a better view of the inner workings of the aircraft, which first entered the British Airways fleet in February 1994, and took its last passenger flight on April 6, 2020.

“It’s been a lengthy process to actually make it safe for public viewing, because these aircraft are designed to be in the air,” adds Harvey.

“So there are a lot of safety features which would not meet health and safety regulations for an event space on the ground. So they have to be decommissioned.”

The extensive makeover took over a year and cost around $671,000.

Although the work took far longer than expected, partly due to delivery issues as a result of the pandemic, the aircraft turned event space is finally ready to welcome guests. Its official launch will take place later this month.

“We’re absolutely inundated with inquiries at the moment,” says Harvey. “It’s a very versatile events facility, so it can accommodate anything from a kid’s birthday party, through to a new product launch or a corporate presentation.”

Upcoming bookings include a filming commission for a TV show, as well as a number of parties. The aircraft can also be hired for weddings at a cost of £12,000 ($16,000) for 24-hours, which factors in set up and breakdown times, and the team already have a wedding booked in this spring.

“The whole of the aircraft has a wedding license,” explains Harvey. “So you can get married in the cockpit if you want.”

The unique facility, located in western England, costs around $1,300 an hour to hire for events.

While Harvey is extremely proud of the project, she admits that it wouldn’t be financially viable for many due to additional fees such as airplane parking fees, which she says can cost around £1,200 ($1,600) a week, depending on the location and the size of the aircraft. The cost of transporting a plane of this size is also significant.

“We’re in a very fortunate position,” she admits.

Although the space will be up and running shortly, there’s still one unexpected issue that hasn’t been completely ironed out yet.

“One problem that we still haven’t managed to solve is to get the toilet system working,” she admits, before pointing out that airplane toilets are designed to work under pressurization when the aircraft is in altitude.

“We’re hopeful that we’ll nail that problem in the next six months or so. But at the moment, we’ve got very posh loo units that are positioned outside.”

Although the process of converting the plane has been challenging and time-consuming, Harvey is extremely proud of the project and can’t wait to start bringing revelers on board.

“I think it’s a real achievement,” she says. “I don’t think anyone else has done such a versatile event space like this in the world. Now it’s time for her to start earning her keep.”

Airlines, FAA spar over flight delays as crucial Fourth of July weekend approaches
It’s Not Your Paradise: Something To Consider When Visiting Hawaiʻi
DOUBLE DATE NIGHT
Why Private Label Brands Are Having Their Moment
How To Drive In Wine Country: The Virginia Edition