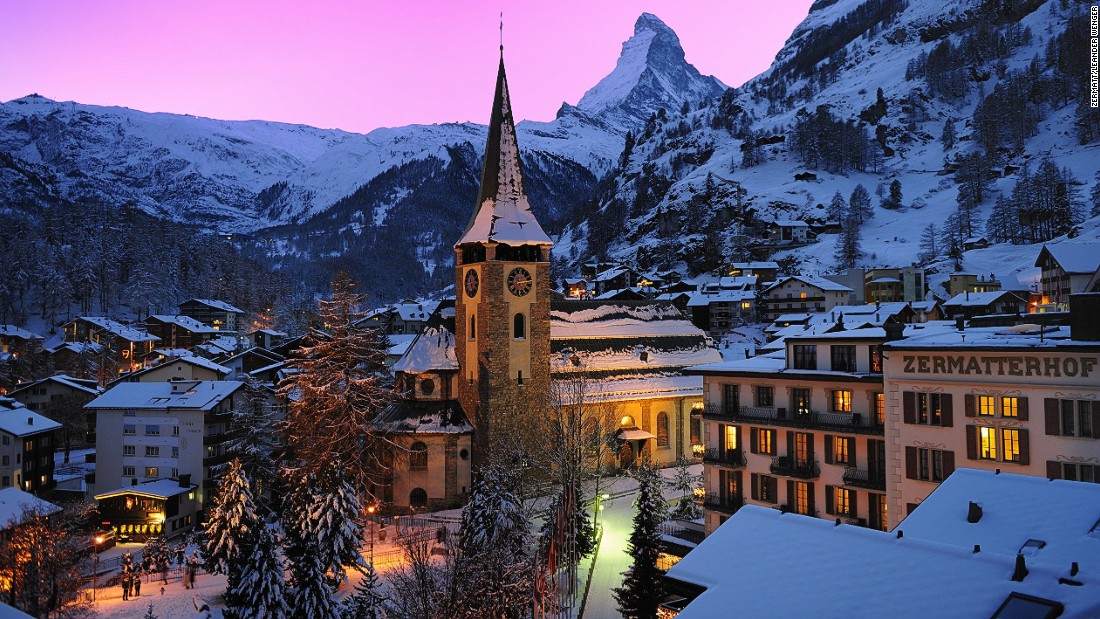 (CNN) — Choosing the most beautiful ski resort in the Alps is like picking the prettiest diamond.

Pristine peaks and sparkling snow make for an attractive package — even with some of our man-made “creations” — but some just carry their beauty a little bit better. The setting, the architecture, the atmosphere, the personality — it all somehow adds up to more than the sum of the parts.

From sneaky peaks at first light to pre-bedtime “goodnights,” the mesmeric Matterhorn turns heads from the moment travelers arrive in Zermatt. That’ll be by train or taxi, of course, as this jewel of a Valais village is car-free and a walker’s paradise.

A cog railway chugs up to the slopes around Gornergrat and gives stupendous views of the Monte Rosa range, while the cableways up to the Klein Matterhorn give close-up views of the icon itself, plus access to Cervinia in Italy.

Worth a trip: Chez Vrony on the Sunnegga slopes offers a quintessential mountain table with the Matterhorn as backdrop. In town, the Museum of Mountaineering taps into a rich history of farming and climbing.
Chez Vrony, Vrony und Max Cotting-Julen, Findeln, CH-3920 Zermatt, Switzerland; +43 027 967 25 52

The small Valais village of Grimentz is the complete package. Alleys flank old-school chalets, rustic granaries and sun-blackened barns, with balconies drowning in 34 varieties of geranium in summer. The setting is pretty lush, too.

Grimentz sits in the Val d’Anniviers, a side shoot of the great Rhone Valley. At its southern end sits the “Great Crown” of four-thousanders (summits over 4,000 meters above sea level), including the Weisshorn, Bishorn, Zinalrothorn, Obergabelhorn, Matterhorn and Dent Blanche.

Worth a trip: You can literally drink in Grimentz’s heritage with a tasting of the legendary Vin du Glacier, a unique Anniviers wine that’s topped up year-on-year. The Bishop’s Barrel in the cellar of the Maison Bourgeoisiale dates from 1886.

The infamous north face of the Eiger casts a fearsome shadow over this neck of the Bernese Oberland. Not literally, though, as Wengen lies on a sunny spur down the hill from the “mordwand,” or wall of death.

The village, which can only be reached by cog railway or cable car, gazes out across the deep Lauterbrunnen valley and up towards the famous 4,000-meter peaks of the Eiger, the Monch and the Jungfrau.

Wengen, all grand old chalets and kids sledding to school, is home to the famous Lauberhorn downhill race on the World Cup circuit. The run passes through a tunnel of another cog train up to Kleine Scheidegg at 2,061 meters, where you can eyeball climbers on the Eiger’s north face from your lunch table.

Worth the trip: A train from Kleine Scheidegg heads up through the Eiger, stopping to let riders look out a window in the rock onto the north face itself, before reaching the Jungfraujoch (3,454 meters) at the head of the vast Aletsch glacier, a UNESCO World Heritage site famous for skiing and climbing.

Kitzbuehel hosts the Hahnenkamm ski race in winter and the Austrian Open tennis tournament in summer.

Ski racing’s answer to Wimbledon or Augusta National, Kitzbuehel is old-school, iconic and the spiritual home for dashing downhillers. The Tyrolean town hosts the historic Hahnenkamm race every January, when the world’s best ski racers fling themselves down a steep ribbon of ice — 40.4 degrees at one point — known as the Streif.

Kitzbuehel goes crazy during race week. Schnapps-fuelled fans roar on their faves and later squeeze into the infamous Londoner pub to down beer served by the U.S. and Canadian ski teams. The rest of the time Kitz is an elegant charmer with a centuries-old center surrounded by the soft summits of the Wilder Kaiser mountains.

Worth the trip: For an authentic taste of the Tyrol, Huberbrau Stuberl offers lashings of schnitzel, goulash and dumplings in an atmospheric setting.

Unique selling points: Jet-set gem set off by snow-encrusted Dolomitic spires of Italy.
This stunner in the southern Alps is a magnet for the beautiful set. Just two hours north of Venice, Cortina d’Ampezzo sits in a sunny bowl fringed by the towering needles of the eastern Dolomites, a UNESCO World Heritage region, some of which soar to more than 3,000 meters.

Cortina hosted the Winter Olympics in 1956 and was the setting for a certain James Bond flick. When you set eyes on her, you might wish Cortina were “For Your Eyes Only.”

Worth the trip: If it’s good enough for Mr. Bond, the five-star Miramonti Majestic Grand hotel might do the job for you. Or take up 007’s License to Thrill and hit the Olympic bobsled run.

Another former farming village done good, luxurious Lech caters for the more discerning end of the money spectrum, plus vacationing royals. Diana, Princess of Wales, was a fan. The town sits in an open bowl among gentle peaks on the banks of the Lech river, part of the famous Arlberg region which includes nearby Zurs and neighbors St. Anton, St. Christoph and Stuben.
Worth the trip: Mileage-loggers can try the White Ring ski circuit — 22 kilometers of groomed runs and 5,500 meters of vertical that loops around the Lech and Zurs. Adrenaline freaks can hire a guide and tackle the steep off-piste of the Valluga north face. Lunchers can settle in at the fabled Hospiz Alm in St Anton.
Hospiz Alm, St. Christoph 118 Arlberg Hospiz, St. Anton am Arlberg 6580, Austria

Saas-Fee hit the right notes as the setting for Wham!’s “Last Christmas” music video in 1984, and her tune continues to wow visitors. It’s another pleasing Swiss village snuggled in a lofty alpine cirque full of traditional “raccards,” or granaries, and old-style chalets among spilling glaciers and majestic mountains.

Fabled 4,000-meter peaks such as the Dom, the Taschhorn and the Alphubel dot the skyline, and it’s from here that the extended version of the Zermatt-Chamonix Haute Route begins. The generally intermediate ski runs flow downhill alongside glacial tongues pocked by gaping crevasses.

Worth the trip: To rub shoulders with real mountaineers, the Britannia Hutte is a climbers’ refuge a 15-minute walk or quick snow mobile ride from the nearest lift. A simple lunch on its sunny terrace offers sublime views.

Alpbach was named “Austria’s most beautiful village” in a TV contest in 1983.

Pretty Alpbach has long known what its best features are and made a point of flaunting them. The medieval village’s traditional wooden farmhouses were proving to be head-turners for early tourists and planners took note.

All upper floors of new buildings must be clad in wood to preserve the bygone feel. The cutesy homespun look — farming is still very much alive — has landed the prize as “Austria’s most beautiful village” — and the competition for that one is tough.

The skiing is generally gentle and low — the village only lies at 1,000 meters above sea level — but this Tyrolean treasure lives up to the name of the ski area it shares with the neighboring Wildschonau valley — Ski Jewel.

Worth the trip: The rustic Boglalm is an Alpbach favorite near the top of the Galtenberg drag lift, offering authentic Tyrolean fare such as goulash soup or grilled wurstl (sausage).
Böglalm, 6236 Alpbach, Austria; +43 5336 5177

Megeve muscles into the list by virtue of its location, with close-up views of Mont Blanc, western Europe’s highest peak at 4,810 meters. The town was one of the first purpose-built resorts in the Alps, developed by the wealthy Rothschild family in the 1920s, but unlike some of France’s more recent purpose-built carbuncles the old farming roots have been retained.

The picturesque cobbled center gives an authentic air, while cruising the wonderfully wooded lower slopes fills your nostrils with the pleasing scent of pine.

Worth the trip: Gourmets are spoiled for choice in Megeve but top of the pile is chef Emmanuel Renaut’s three-Michelin-starred Flocons de Sel.

It’s hard not to get a neck ache in Courmayeur. The quaint old town sits on the Italian side of Mont Blanc tunnel (strictly, it’s Monte Bianco now) and the vast ramparts and buttresses of the Alps’ highest range soar overhead, seemingly climbing forever.

The skiing begins from a sunny plateau above the town with stupendous views of more than a dozen of Europe’s highest peaks. Courmayeur is known for its myriad mountain restaurants offering simple Italian fare, while the historic center is a great place to hit for dinner.

Worth the trip: For the ultimate high-mountain experience, you can get a guide and take the Skyway Monte Bianco cable car to Punta Helbronner (3,462 meters) to access the famous 20-kilometer Vallee Blanche glacier run down to Chamonix in France.

Skyway Monte Bianco, Strada Statale 26, 48 Strada della Brenva / Strada Statale 26, 48, 11013 Courmayeur Italy
Rob Hodgetts is a journalist and editor who has worked for the likes of CNN Sport, BBC Sport, BBC News and Reuters and has reported from some of the world’s biggest sporting events including numerous winter and summer Olympics, golf’s US Masters and the Ryder Cup.
This article was originally published by Cnn.com. Read the original article here.
Share on Facebook
Share on Twitter
Share on Pinterest
Share on LinkedIn