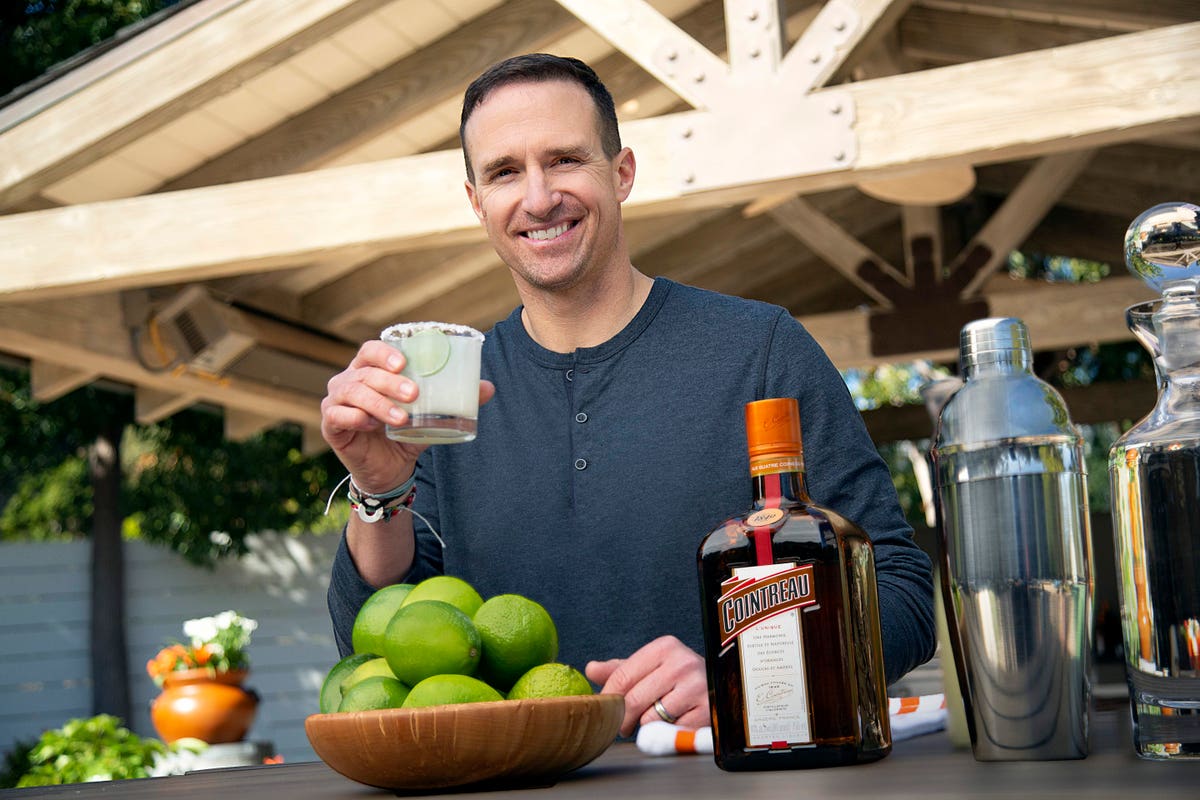 Drew Brees is one of the greatest quarterbacks in the history of the NFL. He is second only to Tom Brady in total passing yardage and touchdowns thrown. Most of his legendary career was spent in New Orleans. And if there’s one thing this city loves as much as its beloved Saints, it’s great food and drink (and music, but that’s another story). Which is why after 15 seasons in the Big Easy, Brees has some sage-like advice to share when it comes to crafting a proper cocktail.

The future hall-of-famer recently partnered up with another local favorite, chef Isaac Toups of Toups’ Meatery, along with Cointreau—the French orange liqueur brand—to demonstrate the fine art of ‘home-gating.’ As you might have guessed, that’s tailgating without showing up at the actual game. Worthwhile insight indeed, as tickets are starting at around $6500 for this Sunday’s Super Bowl in Los Angeles. Grill up some protein and mix up a few Margaritas and Brees knows you’ll be plenty happy watching from home.

In an exclusive interview with Forbes, he reveals the preferred recipe for his favorite tequila drink, as well as some culinary secrets from his time in New Orleans. Spoiler alert: his go-to spot is far outside the French Quarter. You might even get a game day prediction. Read on below, and find the Margarita recipe at the end.

How did your partnership with Cointreau form?

Drew Brees: I’ve always been a big fan of margaritas—especially the classic margarita. And obviously Cointreau is one of the main ingredients in that. So when [I was presented with] a chance to work with them and with one of our great New Orleans chefs, Isaac Toups, I thought it was a perfect opportunity. And the timing was great with the big game this week.

Have your cocktail making skills improved at all after retiring last season?

There’s a gorgeous shot of you on Instagram playing golf barefoot on Kauai with a rainbow literally coming out of your backswing. So you must be spending a lot more time in Hawaiʻi.

DB: Yeah, so my 9-year-old son took that photo right before Christmas. Exactly the way that looks is how it happened. That was not staged.

There’s a rumor floating around that [former New Orleans Saints head coach] Sean Payton asked you to come back out of retirement and that you just responded with that photo. Is there any truth to that?

DB: No, absolutely not. That’s just somebody trying to make a funny.

What are some ways in which your food and drink tastes have evolved while living in New Orleans?

DB: Obviously New Orleans is a culinary mecca, so you’re going to get so many different flavors and unique creations there as a result of so many unbelievable chefs and inspirations and culture—plenty of that from the past 16 years here. When we first moved here, before we had kids, we were going out a lot and probably put on 10-15 pounds. And we’ve been exposed to a lot of different types of foods, for example, I had never been a fan of oysters before. I had maybe tried them raw once. But you come here and you’re getting them served about 50 different ways. And they find a way to make everything taste good. I was always a meat and potatoes kinda guy.

And the hospitality is a big part of it as well, right?

DB: Absolutely. I had a neighbor in New Orleans, Steve and Kathy Price—literally three doors down. And every Monday night we would eat red beans and rice with them. That’s a Monday tradition in New Orleans. So, either we would go down there or they would hand deliver it to us. My kids got used to red beans and rice and andouille sausage every Monday night. Now, wherever we are—San Diego, Hawaiʻi, I’ll have my middle son asking me if we’re having that on Monday night. But you can’t find that in many places, so you need to learn the secret recipe from those who know best.

DB: I’ve got one that I’d describe as the Cheers of New Orleans restaurants. It’s a neighborhood spot where everybody knows your name. It’s called Ye Olde College Inn. It’s on South Carrollton and it’s right next to a spot called Rock ‘N’ Bowl which is an old school bowling alley that has a stage and they have local musicians playing there on every night of the week. It’s the same family that owns both. It was partially destroyed during [Hurricane] Katrina, but rebuilt. There’s an awesome menu, but the best things are stuff that aren’t even on the menu. I get the country fried steak po’ boy—that’s my Texas roots combined with my New Orleans roots.

Any classic New Orleans cocktails that you enjoy?

DB: I usually stick with Margaritas and Mai Tais. A lot of people will go with the Sazerac, which I never got into because I’m not a licorice fan. But I do like the Sazerac House on Canal Street—it’s in a historic building, really good spot.

There are so many celebrities in the booze game these days. If Drew Brees launched his own brand of beverage, what would it be?

DB: I’m a tequila guy. I love my cabs and pinot noir wines. And I love my craft brewery IPAs. Those are my drinks of choice. So…I haven’t tried [former NFL quarterback] Peyton [Manning]’s whiskey yet. He needs to send me a bottle.

Your former coach Sean Payton is now the subject of a Netflix comedy, and he’s being portrayed by Kevin James. When it’s time for the Drew Brees biopic, who do you think should be playing you?

DB: It’s gotta be somebody who’s got great range. I would definitely go the more action-themed actor route. So, if I had to chose one I would say Jason Statham. He has maybe a similar skill set. I can’t say that I’m in the Jason Statham category, but we both have a little bit of the male-pattern baldness thing going on.

DB: I don’t think I’m supposed to…We make our picks [on NBC] right before the game. But I will say this: at the start of the playoffs I don’t think any of us envisioned these two teams being there. The Bengals are so young. They’re talented, but they’re so young. So I’m really impressed by what they’ve been to able to do. They’ve shown some great poise and composure. The Rams are built to go make a run at it now. Their sense of urgency is at an all-time high. So, if you’re going to list a favorite you’d say them. But who wants to bet against the Bengals? It’s going to be a good game. I’ve got a lot of guys on each side that I’m rooting for.