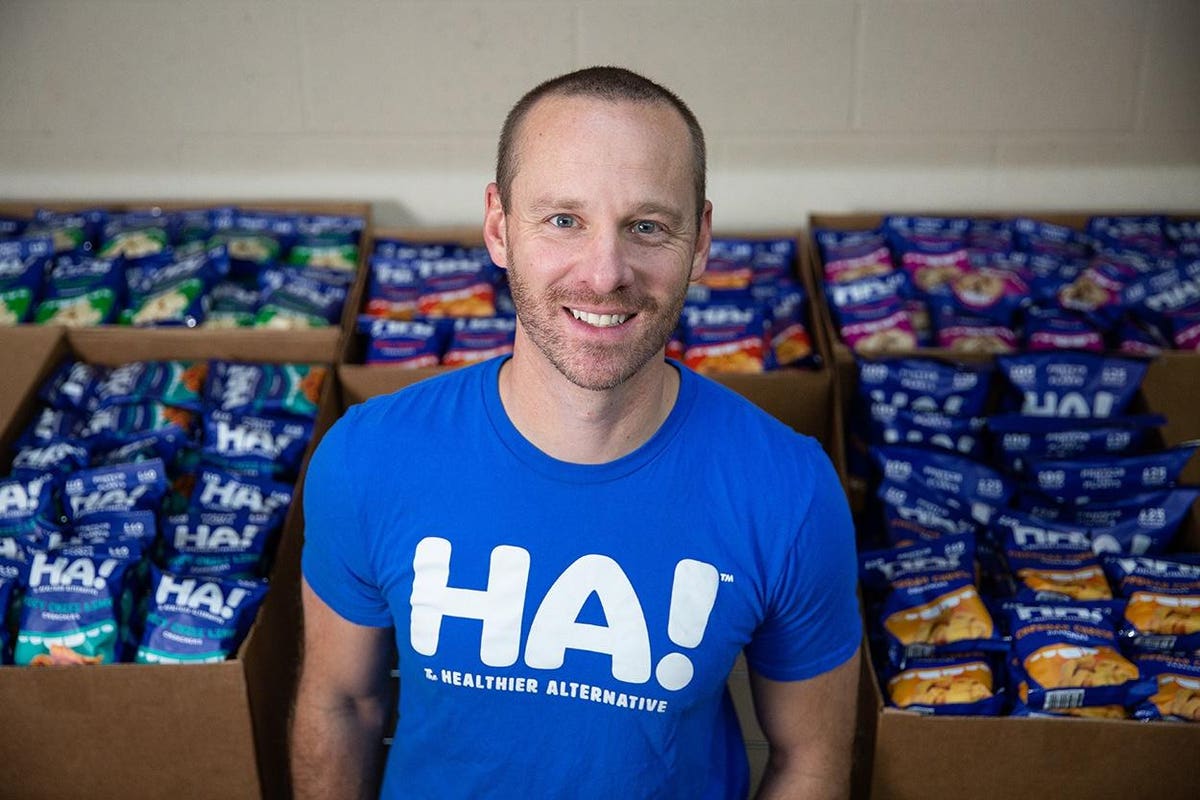 Justin Wiesehan is a self-proclaimed snackaholic. But when he started to count his macros in his quest to eat healthier, he found the better-for-you snacks lacking the flavor and crunch that he loved. His quest to solve that problem led him to launch HA! A Healthier Alternative, which is line-up of salty snacks that offer 11 grams of protein and 140 calories. I sat down with Justin to learn more about the journey of launching HA! and his plans for the business in the years ahead.

Dave Knox: What was the inspiration behind launching HA!?

Justin Wiesehan: In 2010, I was part of a team that founded a company in the electronic cigarette and vapor space. It was called Mistic, and we grew that company from about zero to $40 million with distribution in 70,000 retail doors like Walmart, Walgreens, a lot of the convenience stores, and in the dollar channel. In 2017, because of heightened regulation from the FDA and from the federal government, I decided that I wanted to leave that company and pursue a different path. I have always been a firm believer in helping people live better lives. The science is still out on the vapor industry, but I still feel there’s a relative continuum of risk of people inhaling vapor rather than fire.

I have always been an advocate for products that help people live a better life. As a self- proclaimed snackaholic – eating Doritos, Cheetos, and Lays daily – I was looking for an alternative to those products, just like we provided an alternative to tobacco, I was looking for an alternative to those empty-calorie traditional snacks. What I found on the market in terms of better-for-you snacks at that time really left me unsatisfied from a crunch and flavor perspective. Those products weren’t really satisfying my cravings. They had great health benefits and they had great ingredients, but they didn’t replicate that crunch and that taste that I craved. I set out to see if I could create a product that I wanted for myself. And it took eight months of R&D and of looking at different formats and ingredients, but we finally landed on the product that is now called HA! It delivers that taste, that crunch and that flavor that I was looking for from traditional empty-calorie snacks, but with the functional and nutrient-dense ingredients that give you the 11 grams of protein and the 140 calories with the complex carbs to sustain energy and the healthy fats. From a product development standpoint, it took a long time, but we nailed it, and now I have a product that I can eat instead of all the traditional empty-calorie snacks, and we have a lot of consumers and feel the same way.

Knox: When it came to developing the product, you weren’t coming from a background in food. What first steps did you take to bring the idea to reality?

Wiesehan: At the time I was pretty hardcore into tracking my macros. I was eating a strict regimen of 35% protein, 45% carbs and 20% fat so I started there. I found a food scientist and a food developer on Google of all places. I reached out to a bunch of them and landed on one that understood what I was trying to do, understood the formulation of the carbs, the proteins and the fats. And from there, we went and started sourcing ingredients and putting things together. Once we had something, we took it to two or three different co-manufacturers, and we ran trials and finally landed on the one that we thought was the best.

Knox: What has surprised you the most as you moved into the snack food industry?

Wiesehan: I now understand why healthier, better-for-you versions of snacks are more expensive. The ingredients are just more expensive. Anytime that you are adding protein into something, it drives the cost up. That’s one thing I’ve learned. There are also not a lot of people in the United States that can produce this type of snack, which I didn’t really understand until I got into it. Our product uses a twin-screw extrusion where most puff snacks on the market, like a Cheeto, they are a single-screw extrusion, because they don’t have any protein. Those products are basically cornmeal or some type of ingredient that can go through a single screw. But since we are high of protein, it needs to go through a twin screw, and there are maybe three manufacturers in the country that can do it.

Knox: When you think about how HA! is disrupting the snack industry, what are your main goals with the brand?

Wiesehan: The taste is first and foremost. That is what drove me to do this company. I wanted to create what the better-for-you snacks lacked; that taste and the texture and the crunch that I was looking for. From a disruption standpoint, we really try to hit home that we taste like traditional empty-calorie snacks, but with the nutrients to boot. That’s really number one for the brand.

Number two is, all the other pea-based snacks on the market are offering between four to six grams of protein per serving, where we are offering 10 to 11 grams of protein. So, with double the protein, we’re really disrupting the better-for-you pea-based snacks, because we’re able to offer consumers double than what those other companies are. And with the statistics that show 51% of consumers are looking for more protein in their diets every day, if we can offer that in a grab-and-go, convenient, great-tasting, great-crunching snack, we think that that’s disruptive.

Those are the reasons that we are growing 20 to 30% month-over-month online. We’re starting to gain a lot of traction with other platforms online, like a snackmagic.com. We’re talking to others like GoPuff. And then we’re looking to launch into retail this year. We have some partnerships lined up including launching in Foxtrot Market in March. We have a year in front of us that we are really excited about.

Knox: When you look this snacking industry as whole, better-for-you has grown exponentially over the last few years. As you pitch HA!, what sets the brand apart?

Wiesehan: I actually went into the most competitive category in better-for-you with salty snacks. That is what I hear from buyers all the time, but they are really excited about how we differentiate our protein levels. We just had a meeting last week with a distributor and they said that’s the biggest point of differentiation that we have that they are excited about. We get in the door with us being plant-based and having a high level of protein. But once they try it, they’re like, “Okay, these taste really good.”  It is this trifecta, but then we have a brand that really stands out on shelf. We purposely made the brand fun, appealing, and approachable. It doesn’t feel like a green better-for-you snack. It’s a lot more fun and that allows us to compete down the road with the fun, traditional empty- calorie snacks of the world like Cheetos and Doritos, because we have that aspect to our branding.

Knox: As you have created the flavors for HA!, how have you balanced the staple salty snack flavors vs some of the crazier flavors that have emerged recently?

Wiesehan: Product development is one of my favorite things to do. I love trying new flavors, focusing on trends and looking at things like that. We just finished testing around 10 new flavors that we hope to launch this year. There’s a strategy to do limited releases online and exclusives with retailers. One interesting key point with our products is that Churro Loco is our only sweet flavor. We have four savory flavors and we have one sweet flavor, and Churro Loco outsells our number two selling flavor two to one. There’s a white space in the salty snack market for sweet offerings that we are exploring pretty hard, and we have lot of really nice, sweet flavors in the mix. The one hard part about sweet flavors is you must really watch the addition of sugar. That has been a balance and a struggle, but we have gotten to a point where there are flavors I am really excited about.

Knox: Are you planning to extend that innovation to new form factors beyond just flavors?

Knox: When we look at a lot of these stories of entrepreneurs out there, it’s easy to look at the headlines of you know, ” XYZ raised millions, tens of millions of dollars.” You’ve chosen to go the more entrepreneurial route. What led you to go that route versus start day one and try and go pitch for millions of dollars for this brand?

Wiesehan: That just comes down to resources and proof of concept. I wanted to make sure that this was something that had legs before I went and took on a bunch of money from somebody. I really took the time to prove the concept out. I’m a big operational guy too, so I like to know the inner workings of how the box is packed, and what goes in the box. Do you put a sticker? Do you put a postcard? Do you do all these kinds of things? Our decision on fundraising was me wanting to start from the ground up and really try to build it myself. I wanted to understand the inner workings of how every part of the business comes together, from production to getting the product to the customer.

Knox: When you look back at that choice and that journey, what advice would you give to fellow entrepreneurs as they’re contemplating that same choice?

Wiesehan: If you don’t have to do it, don’t. It has been a really good ride and we are now positioning ourselves to move in a different direction from a fulfillment perspective and production capacity perspective. But looking back, I don’t think I would do it again like that if I had the choice.

It’s just a lot of work, and people always say, work on the business, not in the business, and for the last year and a half, I have been working in the business and on the business. I am just really excited to get some free time back so that now I can go and really focus on the business and grow it to the level that I know it can be. A lot of that focus is going to be on retail. I know that if we get shelf space and be really strategic about our channel strategy, then we will be able to hit those channels hard so that we can succeed.

The holiday you’ll return from feeling 20 years younger
Cretan Food – 100% PURE LOVE Farm-to-Table Mediterranean Cuisine in Crete!
This man and his dog spent seven years walking around the world
How Traditional Cornish Pasties Are Made | Regional Eats
Tourists are back in Iceland. But so is whale hunting