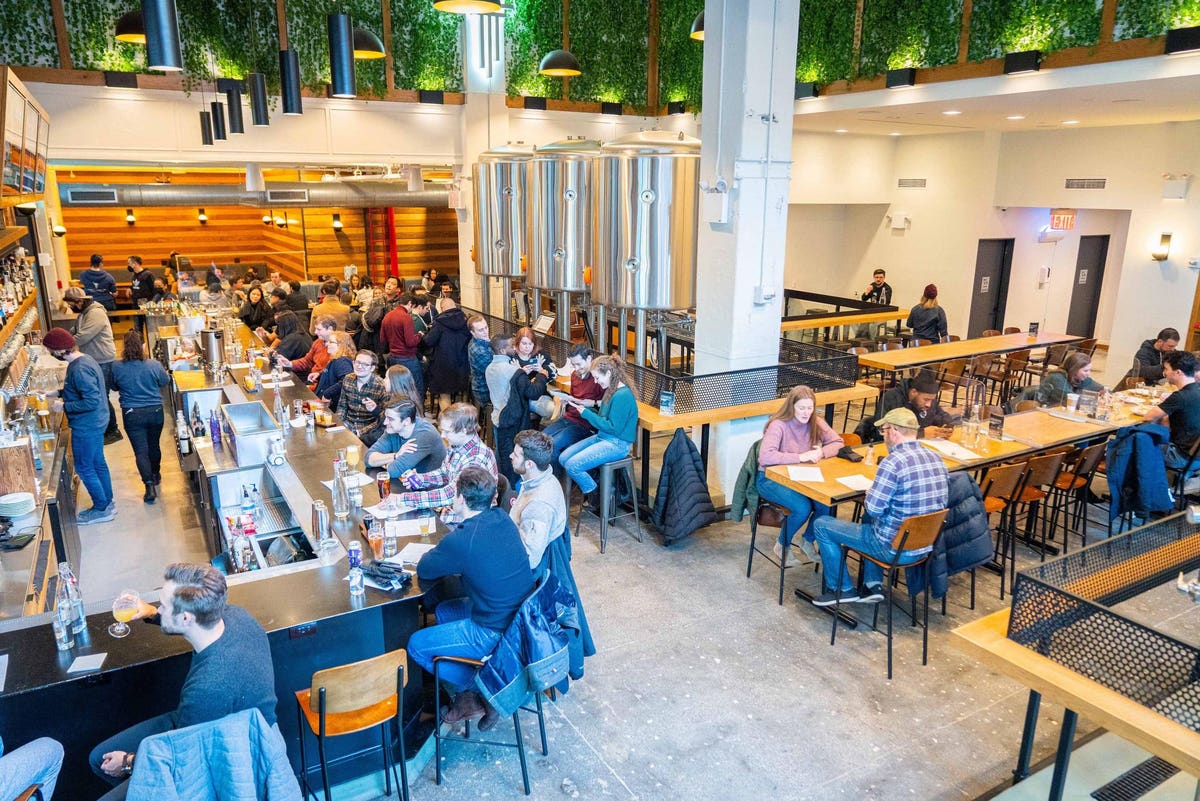 When Chelsea Brewing Company closed at Pier 59 at Chelsea Piers in 2014, after deciding not to renew its 20-year-lease, it was the last remaining brewpub operating in Manhattan. Its closing symbolized how tough it is to sustain a brewpub in pricey Manhattan.

But that hasn’t deterred co-owners John Dantzler and Joe Correia from opening the Torch and Crown Brewing Company, its flagship brewery and restaurant, on a quiet street in SoHo, in October 2020. At the time, it was the only brewpub operating in Manhattan, though Bronx Brewery expanded to the East Village in February, so currently there are two.

After several brewpubs in Manhattan closed, a new brewpub Torch and Crown Brewing Company in SoHo is trying to beat the odds and succeed where others have failed.

Hence, the brew tanks lodged at the brewpub, upstairs and downstairs, will soon produce the hoppy water needed to brew beer. Dantzler said the three tanks in the middle of the floor are “brite tanks that are piped directly into the bar, so they hold and serve finished beer.”

Dantzler and Correia were childhood friends growing up in New Jersey who started homebrewing at age 16 and vowed at a young age to collaborate on a brewery. Correia worked at craft breweries Rogue Ales and Kane Brewing while Dantzler served as a credit trader at Goldman Sachs and Barclays.

The duo invested their own personal savings, raised money from friends and family, and obtained an SBA loan for equipment, to fund the brewpub.

They named it Torch and Crown because historically, Dantzler noted, “people arrive in New York to chase dreams and were first greeted by two iconic images—the torch and crown of the Statue of Liberty.”

By Manhattan standards, their brewpub is large, amounting to 9,500 square feet of space. It accommodates 250 people inside, 200 outside in an enclosed area in the wintertime, and 65 in its private downstairs space, totaling 515 customers. It also has a to-go section where it sells its beer in four-packs and a variety of branded merchandise.

Dantzler said that its goal is to “create something immersive—in our brand, our place, our restaurant.” Its staff is trained in hospitality, which he defined as “understand what each guest is looking for and delivering it.”

Its business model combines wholesale and retail sales. Currently it’s about 60% retail and 40% selling its brews wholesale to 800 assorted restaurants, bars and stores. To achieve that, it taps (pun not intended) its own distribution network, which entails multiple trucks and warehouse/delivery personnel and cuts out the middleman

Its roster of draft beers includes Almost Famous IPA, Tenement Pilsner, Grind Coffee Porter and Warp, West Coast Pale Ale. Dantzler said that the draft beers have drifted to “more hops and more IPAs on the menu. We try to take a balanced approach to our recipe design.”

It’s currently manufacturing beer at its Bronx facility that was acquired from the bankrupt Chelsea Brewing Company. But eventually it will start producing in SoHo where co-founder Correia said, “Every ounce of the beer produced in SoHo will get sold at the bar.”

The problem in Manhattan is “achieving scale” because the productions facilities tend to be smaller because rents are so high, Correia noted.

When this reporter visited it on a wintry February late afternoon, the clientele was almost exclusively people in their twenties and thirties. There were two tables of people who worked at exercise company Peleton uptown who had been downsized that day, saying their farewells.

To get the word out that Torch and Crown has debuted, it has generated its fair amount of press but relies mostly on “word of mouth,” Dantzler suggested. “People drink our beer and tell their friends,” he said, but it also relies on a marketing coordinator, who oversees email distribution and social media.

While Manhattan has only two brewpubs, New York City has about 45 of them. San Diego, a much smaller city, has 135 breweries. Given its 8.8 million population, New York City could accommodate more brewpubs but needs to ease its complicated regulations and zoning, Dantzler suggested.

Asked what the three keys to its future success are, Dantzler replied, #1, Creating experiences that are unique and driven by hospitality, #2, Growing its presence, such as in areas like Montauk in Long Island, #3, Financial discipline in their restaurant operations and distribution.

Colorado’s Wine Industry Is Bringing Economic Growth To A State Known For Fun
The couple who met at Disneyland
Fourth of July travel surge puts airlines — and passengers — to the test
Here’s The Latest Data On Climate And Food And It’s Not Good
Dufour 61: A Dynamic New Flagship Yacht