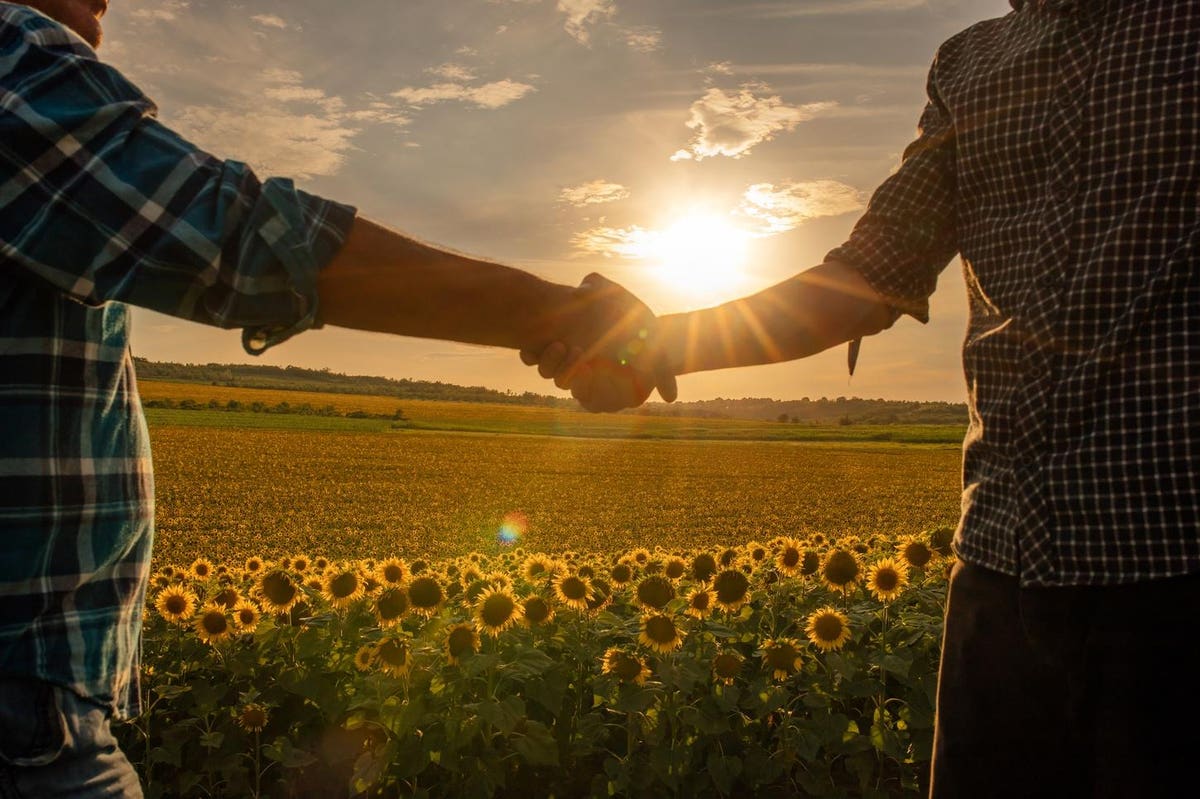 Tidal waves of panic tempered by excitement keep hitting a married couple as they drive their elegantly constructed Italian car from Milan, Italy, down to the town of Montalcino in Tuscany. “What could be the emergency?” wondered the wife as they were called down to Montalcino with an urgent message. “Maybe… no, it couldn’t be possible… could it be possible?” the husband said. They had already been living an incredibly adventurous life, gambling everything on their passions and love for each other, but they could potentially be given an offer, one that they could never refuse, that would give them more responsibility than they could have imagined. Would it end up ruining the wonderful life they have already created? Or would it bring more joy and excitement into the fantastical journey they were already taking together?

They were a mixed couple in regards to their origins of birth as Maria Gemma was an Italian-American raised in the U.S. and Neil Empson was a New Zealander who had a passion for classic cars, yet their souls were cut from the same cloth as after their first marriages didn’t work out, they found each other and within 11 days of their first date they were married. Maria had spent a lot of time in Italy and wanted to live there and that suited Neil as he figured he could restore the classic cars, a long-time passion, and sell them to buyers around Europe. As they happily struggled, living in a tiny closet of an apartment in Milan, dribs and drabs of money would come in when Neil could sell a car. Eventually, they ended up importing wines into the U.S. as their love for food, wine and the Italian people would place them on that path.

In 1972, it was a considerable gamble back when they started in the wine import business, let alone the Italian wine import business, yet it didn’t matter if it would end in financial ruin for them as the close friendships they made with Italian wine producers was all that mattered – and hence Empson Selections was born. There wasn’t yet an established wine drinking culture in the U.S., and many parts of Italy were still recovering from the deep economic depression mainly caused by WWI and WWII. As ludicrous as it sounds today, some owners of Tuscan wine estates were giving them away for practically nothing during the 1970s and the early 1980s.

And so this couple, filled with the vibrant energy of being given a second chance at life, after being in business for almost a decade, had received a fax from the owner of Costanti, a Brunello di Montalcino wine producer whom they had been working with since nearly the very beginning, saying that it was vital that they both come down to Costanti as soon as possible.

The next morning, they drove through fields of sunflowers as the sun started to rise and the famous Montalcino fog started to slowly encompass their car making the whole experience seem like a dream; they finally found themselves driving up to the Costanti estate where they found the owner, Emilio Costanti, an older man who was a medical doctor by trade who never had any children, standing by a young man. Soon they would find out the urgent news – Emilio was leaving his estate to his grand-nephew Andrea, and he would take charge after he finished college in a couple of years.

Maria and Neil Empson initially established their import company bringing Italian wines into the U.S. and eventually Canada with long dinners, shared holidays and sipping wines until the wee hours of the morning with wine producers who came from multi-generational families. It was not a good living at the time in terms of making a lot of money, but it was a good life. It is pretty unusual for any wine producer to stay that long with the same importer as these days it is common to jump from importer to importer as there are always other companies out there that promise the moon and stars. Maria and Neil’s daughter Tara currently runs the company as they had decided to retire in their 80s a few years ago, although it is a much more competitive and unstable wine world – where loyal wine drinkers have become a rare breed, Tara still cherishes those childhood memories of falling asleep at those long dinners where her parents made relationships for life, and that will always be at the core of Empson, no matter how much the world changes around them.

Through many decades, as Empson Selections celebrates their 50th anniversary this year, they have been able to assemble one of the greatest portfolios of outstanding, small Italian wine producers. Costanti is undoubtedly known among Brunello di Montalcino wine lovers as one of the great producers that always makes wines that illustrate the elegance, finesse and power of Sangiovese from the heart of Montalcino.

Along with Costanti, Empson imports Fuligni, which is not that far from Costanti, and they are both located where historically there has been a concentration of fantastic estates. Costanti and Fuligni are situated in the center of the Montalcino designated wine-growing area where the “most complete, most refined and truly the most excellent Brunello” wines are made, according to leading Italian wine expert and award-winning wine writer Ian D’Agata. Ian also spoke about the two estates having great sites and that both are “blessed with the best winemaking teams in all of Montalcino”.

Fuligni’s cellar master, Daniele Zeffirini, noted that the Fuligni and Costanti wines were “special” because of where they are located in Montalcino; they have high elevations, ranging from 1,000 to 1,500 feet, so that they sit above the fog, avoiding frost and disease as well as enjoy a mild climate, having the famous Tuscan galestro (friable rock from their marl-like soil) in their vineyards combined with plenty of limestone that gives a “minerality, elegance and ability to age” to the wines, according to Daniele.

Both estates have had a long history; Fuligni going back to the 1920s and cellar master Daniele has known the Fuligni family since he was a child, and Costanti is part of the birth of Brunello di Montalcino with documents proving that they were making it in the 1800s, but Andrea Costanti said that his family was making wine in Montalcino as far back as the 1600s.

As Tara Empson reflected on the fact that next year would be the 50th anniversary of Empson and Costanti working together, she mentioned how her father always says to look out for Andrea Costanti and make sure he flourishes. “My father is so proud of you,” said Tara, with Andrea responding, “Your parents have always been friends, but they were very important to me in making what Costanti is today,” as he talked about how they introduced him to his winemaker, Vittorio Fiore, all those years ago. Vittorio, who is 80 years old now, taught Andrea not only about making wine but a more profound “philosophy” of the world of wine.

Even though on that fateful day, the Empsons did not end up inheriting a winery, they knew that they did inherit the responsibility of making sure that a young man succeeded, and Andrea has surpassed what they ever thought was possible.

2019 Costanti, Rosso di Montalcino DOC, Tuscany, Italy: 100% Sangiovese. Andrea Costanti doesn’t like to think about his Rosso as a second wine to Brunello di Montalcino as it is more about classifying the Sangiovese, during any given vintage, as being better for a more youthful wine that is meant to be consumed sooner. This 2019 has a stony minerality on the nose with red cherry and plum fruit and a touch of cardamom spice with complex notes of upheaved earth that had a good weight on the palate with juicy black and red fruit.

2017 Costanti, Brunello di Montalcino DOCG, Tuscany, Italy: 100% Sangiovese. 2017 was a very warm vintage and so it is ready to drink now and Andrea says that they have learned how to find balance during warmer vintages since 2003. They made no Riserva in 2017 since they only make it when they know the wine will age for many years. The nose has hints of forest floor with dark black cherry fruit and a round, lush body with cherry pie and blackberry preserve flavors with enough freshness to balance it out.

2016 Costanti, Brunello di Montalcino Riserva DOCG, Tuscany, Italy: 100% Sangiovese. 2016 is considered to be one of the best vintages for Brunello di Montalcino as there has never been a greater balance of elegance and structure for all producers across the board. Aromatic nose with baking spice and truffles with remarkable harmony between the ripe fruit and vibrant acidity with a long expressive finish of orange blossoms and lavender grounded with earthy notes along the breathtakingly long finish.

2019 Fuligni “S.J.” Toscana IGT, Tuscany, Italy: A blend of Sangiovese and Merlot that was first made in 1977 and it is only made in small volumes, 1,500 to 2,000 bottles a year, but it is a lovely blend that shows the beautiful partnership between Sangiovese and Merlot. This 2019 vintage has 70% Sangiovese and 30% Merlot and the nose gives delicious aromas of blueberry jam with dried bay leaf and cherry liqueur on the palate with an underlying graphite note.

2017 Fuligni, Brunello di Montalcino DOCG, Tuscany, Italy: 100% Sangiovese. Crumbly rock on the nose with bright red and black fruit that had silky tannins and intoxicating mixture of rosemary, dried rose petals and hints of limestone among the fleshy fruit.

2016 Fuligni, Brunello di Montalcino Riserva DOCG, Tuscany, Italy: 100% Sangiovese. The Riserva is made from Fuligni’s best vines and cellar master Daniele Zeffirini stated that 2016 is one of the greatest vintages as well. The enthralling aromas of rose oil, fresh tree bark and an intense minerality from just the nose already make this an impressive wine with finely etched tannins that caress the palate along the stunningly lengthy finish.

2013 Fuligni, Brunello di Montalcino Riserva DOCG, Tuscany Italy: 100% Sangiovese. 2013 is considered a “classic” vintage as it has lots of acidity with plenty of structure and fresh fruit flavors. This 2013 Riserva has an intriguing smoldering earth quality that opens with wildflowers and black cherries that has mouthwatering acidity and slightly firm tannins that give a good framework that lifts the wine.

World Famous Chefs Come To Telluride, Colorado For July 4th Culinary Celebration
Tourists are back in Iceland. But so is whale hunting
Your 70s is the best decade of your life – meet the women who prove it
Airline reveals bunk beds for economy class passengers
The couple who met at Disneyland