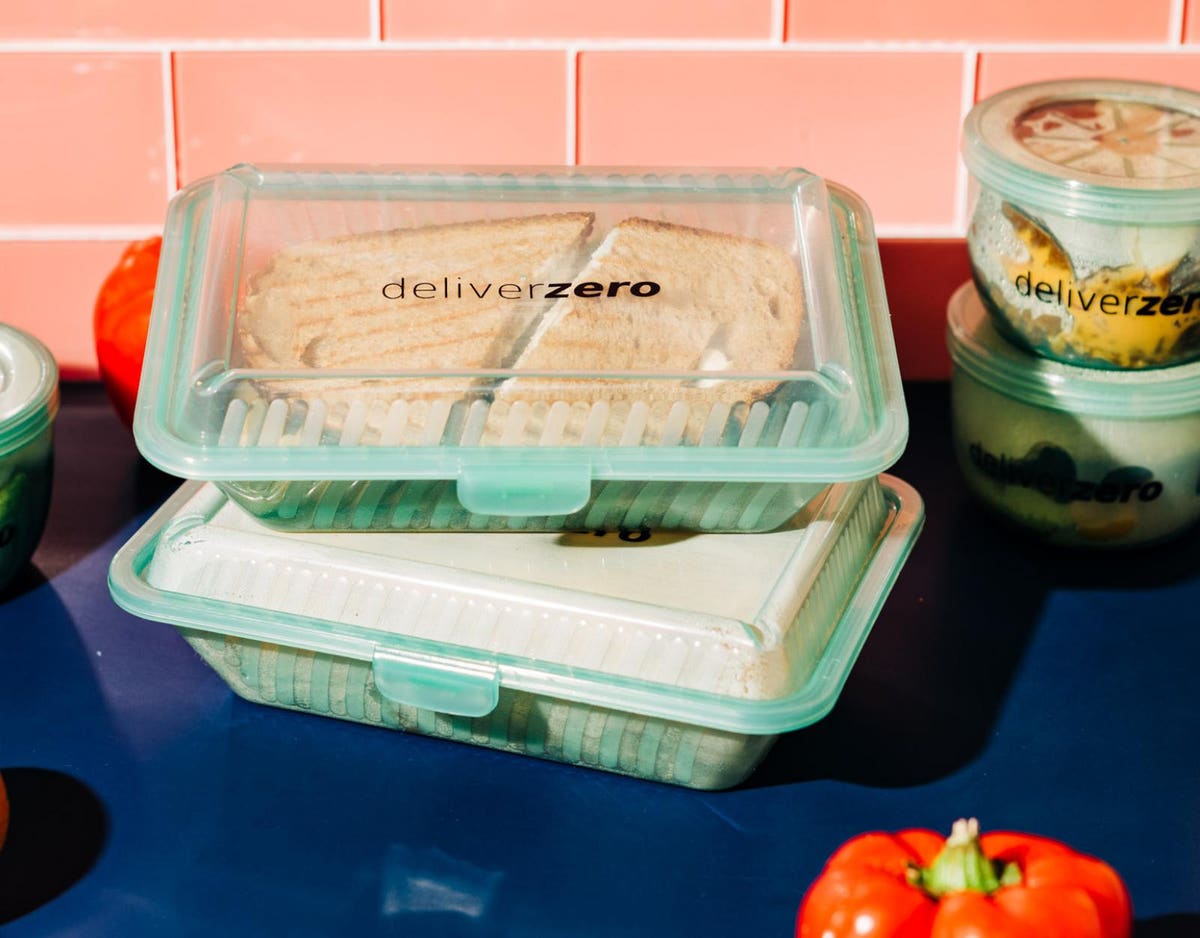 Jeff Kart, a Forbes sustainability contributor, wrote a July 2021 column suggesting that the future of restaurant delivery could lie in plastic-free take-out. He also pointed out that states such as New Jersey, Virginia, Washington and Colorado recently passed bans on single-use plastics.

But with the onslaught of delivery services such as DoorDash, Grubhub, Uber Eats, and Caviar, the preponderance of plastic to deliver food has been skyrocketing and helping to damage the environment. But a start-up is looking for ways to reduce plastic consumption in take-out delivery and improve the environment: DeliverZero.

In November 2019, Adam Farbiarz, an attorney in Brooklyn, and marketing specialist Lauren Sweeney, concocted the idea for DeliverZero, a company that specializes in reusable polypropylene plastic containers, that are supplied to restaurants. It launched without outside capital, but subsequently has taken on funding from angel investors.

It started as a stand-alone delivery platform but then made changes to its business model. Now customers either pay a 99 cents fee added to their bills or can return them to any eatery in the company’s network. Moreover, it is piloting a partnership with DoorDash where it charges customers 99 cents for its containers.

Containers can be returned to the courier who delivers their next order or in person at any participating eatery in the DoorDash/Caviar network.

Its plastic containers, Sweeney noted, are used to the “maximum extent. We’re using them 50 to 100 times up to 1,000 times,” she said. Restaurants wash the containers in the same dishwashers that they clean their dishes and glasses. “Anyone who’s comfortable eating with a fork washed by them should feel comfortable eating out of our containers,” she cited.

It’s a profit-making company, but it’s also on a mission. One of Sweeney’s professors at Fordham University said “you can do well by doing good,” and that’s a motto DeliverZero lives by. “In the U.S., where legislation comes slowly, we can take it upon ourselves to create the future we’d like to see and we can do well financially in the process,” Sweeney, a native of Northport, N.Y., noted.

Delivery customers can receive the containers in one of two ways: 1) They can order it on the DeliverZero platforms and pay nothing extra initially. If they don’t return it within three weeks, they’re charged $3.25 per container, 2) If they opt in when they order from DoorDash or Caviar, they’re charged 99 cents and there’s no limit on how often they can use the container.

Customers and restaurants in DeliverZero’s network within New York City are located in Brooklyn, Manhattan and Queens. It doesn’t deliver to the Bronx or Staten Island.

Sweeney said that it would like to extend its network to those two outlying boroughs, but currently doesn’t have the funding to hire additional staff. “We’ve raised less money than the 15-minute grocery delivery apps,” she noted.

An array of restaurants is participating in DeliverZero; most are locally-owned, not chains, and include Café Mogador, Khiladi, and Mimi Cheng’s. One restaurant chain exception is Just Salad, which has five outposts participating.

Restaurants don’t sign exclusive contracts with DeliverZero and can tap any other restaurant delivery service they choose.

Restaurants also gain by cutting their costs. Sweeney said that they pay 12 cents to 85 cents per container, which adds up. Since eateries are seeing many customers opting out of using plastic utensils, they’re tapping a chord with clientele that are environmentally-conscious.

Since the pandemic and more people started ordering delivery, the Wall Street Journal reported that restaurant delivery packaging has spiked 42% from 2020 from the previous year. “They were ordering more at home and started taking out more trash and they were more cognizant of how much waste is created,” Sweeney said.

Asked which market is most attracted to using their services, Sweeney replied that it’s a wide-ranging array of customers but “busy families and young professional especially appreciate our service.”

Several months ago, DeliverZero launched in Amsterdam via a licensing agreement with a company located there that specializes in reusable packaging. “We hope to grow as far and wide as possible,” Sweeney stated, reluctant to delve into specifics or future scenarios.

Sweeney describes the three keys to its future success as: 1) Having more consumers be educated on the links between waste and climate change, 2) Attracting more support from the business community 3) Legislation that incentivizes the reuse of plastics.

Why Private Label Brands Are Having Their Moment
The dramatic cruise with an extraordinary art collection
This man and his dog spent seven years walking around the world
FDA: Vidalia Onion Recall Due To Listeria Concerns Affects Wegmans, Publix, 5 States
Airline reveals bunk beds for economy class passengers