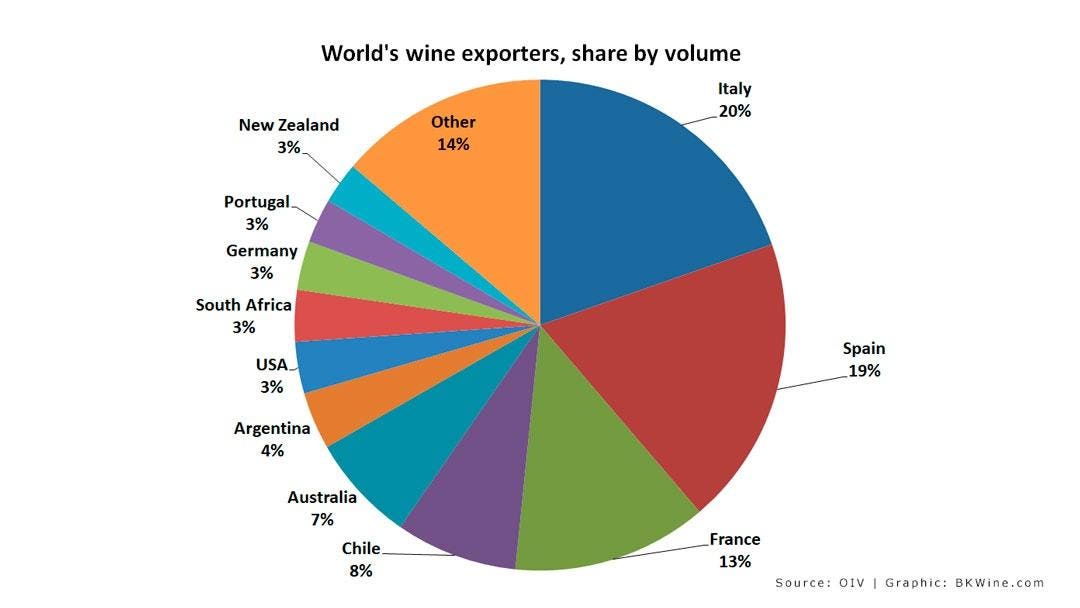 The world was shook by the pandemic in 2020. But how did it affect the international trade in wine? Superficially, one might say, “not much at all”. But looking at the details there is no doubt that it badly affected it, perhaps even halting the ongoing globalisation of wine. This is the latest in our series of articles analysing the global data on wine published by the International Organisation of Vine and Vine (OIV).

The world trade in wine shrunk slightly in volume in 2020 to 105.8 Mhl, -1.7%. However, measured in value the drop was bigger, total wine exports reached 29.6 billion euro, -6.7%. In other words, global trade was almost stable but the average prices fell.

As the OIV notes in its publication, there are several obvious factors contributing to this unimpressive performance: the covid-19 crisis that had a particularly negative effect on some big exporters (South Africa trade ban for example), the trade war between the EU and the USA that led to American tariffs on wine, Chinese tariffs on Australian wine, and the dampening effect on trade of the Brexit mistake.

Read our previous articles on the Wine Global 2020 series here:

Countries with export volumes equal to or above 2 Mhl in 2020.

In 2019 Italy and Spain were on par, sharing first position as biggest exporters. In 2020, both countries decreased their exports but Spain more so than Italy.

The three biggest wine exporters, the same as the three biggest producers but in different order, account for little bit more than 50% of world exports. Compared to the wine production, it is worth noting that one of the top ten producers is not big a big enough exporter to be on this list: China. Instead, we have New Zealand appearing in place number 10.

Only one country saw a significant rise in exports: Argentina with +27% to reach 4 Mhl.

Two other countries also made good gains, Portugal and New Zealand, with +5.3% and +6% respectively, but this could not compensate for the falls in the bigger countries.

The value of exports fell much more, -6.7% to reach only 29.6 billion euro. The OIV speculates that this is in parts due to the closure of restaurants and bars in some countries. But is it really so that we drink more exclusive wines in on-premise places (restaurants, bars etc) than what we do at home? And is the horeca channel so big? Perhaps.

Another possible explanation is that the crisis may have meant (still means?) that we were more cautious with expenses and chose to go for cheaper wines. What do you think?

Countries with export volumes equal to or above 2 Mhl in 2020.

Unsurprisingly, France moves up to the top spot when it comes to value of the wine exports.

All countries, except two, saw a drop in total export value. The two exceptions that grew are Portugal and New Zealand, which are the two smallest exporters on the list counted in volume.

The biggest exporter, counted in value, is France. The value of French exports are more than 40% (!) higher than the number two on the list, Italy, although Italy exports bigger volumes. Italy’s export volume is 53% higher than France. This is, of course, due to the fact that France exports much premium wines, most importantly large volumes of high-priced champagne. However, champagne exports saw an important drop, more than other categories, in 2020 which is also reflected in these numbers. In 2019 the French export value was more than 50% ahead of Italy. In 2020, “only” 40% ahead of Italy. France is also the country that has seen the second biggest drop in export values, -10.8%. In fact, French exports dropped with over one billion euro.

The biggest loser in terms of export value is, however, Germany that shrunk with -15.5% in value. I see no obvious explanation for that. Do you?

The big three wine exporters: Italy, France, Spain: more than half of total

France alone accounts for almost 30% of all the worlds wine exports counted in value. Together with Italy the two countries capture 50% of world export value.

The three biggest exporters — Italy, France, Spain — account for 52% of world exports in volume and 59% in value. But all three saw drops in both volume and value.

The internationalisation of wine trade pauses?

Over twenty years the wine market has become very much more international. International trade in wine (exports) has almost doubled. In 2000, 60 M hl wine was exported. Today, almost 110 M hl is drunk in another country.

The total exports were 105.8 Mhl in 2020 and the total production was 260 Mhl so one could say that 41% of the world’s wine is drunk in another country than where it was made (is exported).

But a perhaps fairer comparison is to look at total exports compared to consumption, since some of the wine production is used for other purposes. This is exactly what the OIV does in their “wine market internationalisation index”: the ratio between the volumes of world wine exports and world wine consumption. This gives an even more impressive figure, 45% of all wine consumed comes from a foreign country. Almost half of all wine drunk has been exported.

That is just a slight increase from 2019. Is the internationalisation of wine taking a pause?

However, if we look over a longer period of time, the international trade in wine has seen a very impressive evolution. The internationalisation index has grown from 27% in 2000 to 45% in 2020.