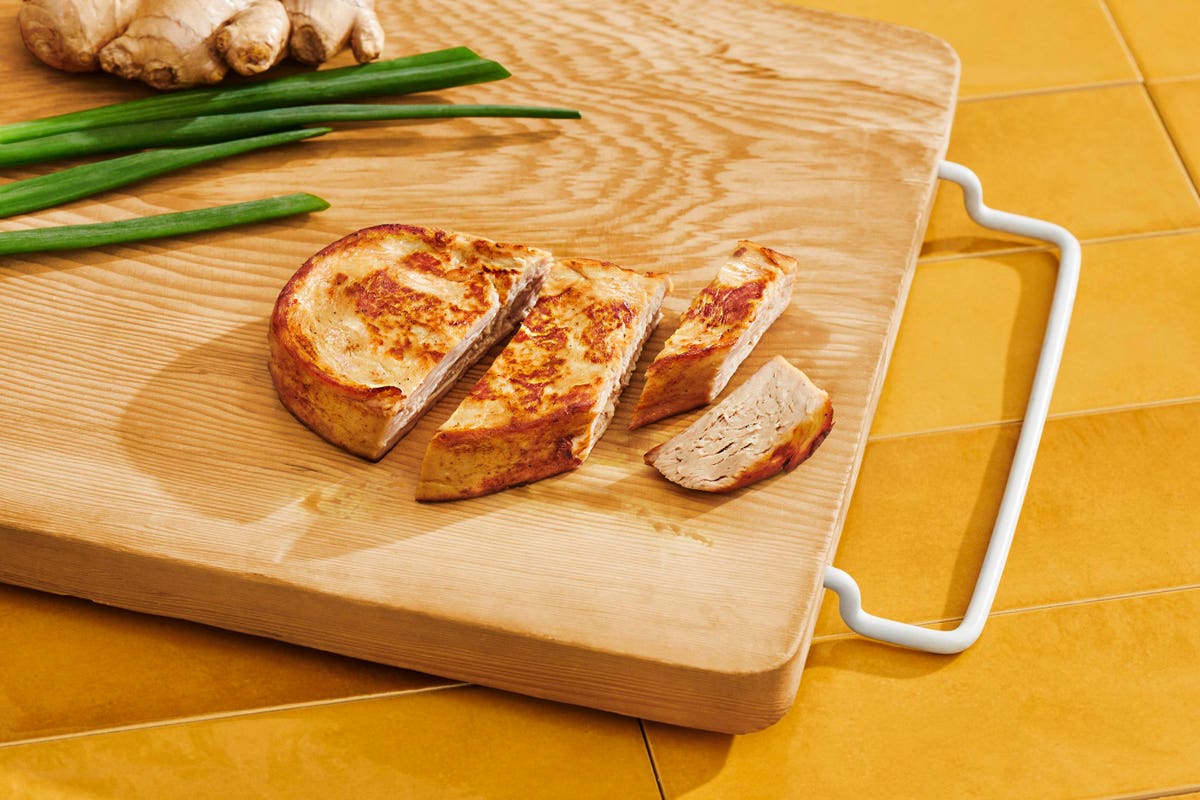 If you’ve had your fill of Impossible Whoppers and Beyond Tacos for now, there’s a new meatless fast food option at your local drive-through. KFC, in case you haven’t heard, recently debuted its new Beyond Fried Chicken – a bucket full of crispy, plant-based chick’n nuggets that are said to give actual poultry a (chicken) run for its money.

But while fast food is catching up with the times, food science and technology leaders are on to the next challenge: whole cuts of meat, like steaks and filets, made from plants. Your local freezer aisle and, chances are, your favorite quick service chain probably offer enough homogenous meaty plant foods, like nuggets, burgers, and sausages, to last a lifetime. At this point, the market is fairly saturated. But if you’re a plant-based eater who craves a steak from time to time, or a strict omnivore hoping to cut back on meat without feeling like you’re missing out, whole cuts are still a rarity. But they might not be for much longer.

It’s fairly obvious why we have all manner of plant-based burgers and nuggets, but few foods that actually resemble a cut of meat: because an actual cut of meat isn’t homogenous. It’s made up of distinct layers of muscle and fat, which are attached but look and taste differently from each other. There are simply more components, not to mention harder-to-replicate textures, in an actual cut of meat or fish. As a result, whole cuts are the (mostly unattained) holy grail of plant-based food tech today.

“There really is no limit to the innovation possible in plant-based meat and the development of whole cuts,” says Rachel Dreskin, CEO of the Plant Based Foods Association. “Each time a novel ingredient is used, or a new technique is discovered, more ideas are sparked, allowing for continuous and exciting development in this category. With rising interest in foods that align with their values, U.S. consumers are purchasing plant-based meats more than ever before–and companies are meeting the moment, leading to increased variety and continued industry growth.”

Consider Japanese company Next Meats, which recently debuted their plant-based skirt steak and short rib at a handful of stores and restaurants in California. It makes dishes like plant-based fajitas more true to their original form than they would be with most pre-existing plant-based meat products, which is exactly how Michelin-Starred Chef Josef Centeno of Bar Ama in Downtown Los Angeles and Chef Reina in San Francisco are putting them to use. The skirt steaks and short ribs are among the first whole cut-style meat simulacrums to hit the American market. But the company is just getting started.

“The next evolution of Next will be a premium plant-based meat, launching August 1st, 2022, produced in California,” says Koki Terui, Chief Executive Officer of Next Meats USA. “It is a product that has identical texture and mouthfeel to an animal-derived protein.”

Here in the states, MyForest Foods may be the only company to beat Next Meats to the whole-cut punch. And if you haven’t heard of them, it’s probably because each of its limited production runs have quickly sold out since the launch of their fungi-based bacon in November 2020; At the moment, MyForest Foods MyBacon strips are only available from the Honest Weight Food Co-Op in Albany, New York, but the company has plans to expand this year. In fact, they have 120,000 square feet of new infrastructure in the works between a facility in Saratoga Springs, N.Y. and the world’s largest vertical AirMycelium farm in New York’s Hudson River Valley Region which the company is hoping to begin utilizing in the fall. Additionally, they recently partnered with Whitecrest Mushrooms, a gourmet mushroom farm in Canada, to produce nearly three million pounds of mycelium each year.

Of course, plant-based bacon substitute products have been made before. But no previous commercially-available iteration has truly managed to recreate the natural marbling that occurs in bacon, a famously fatty cut of meat. Mycelium – the part of fungi that grows beneath the ground – is the (not so) secret ingredient, and it’s quickly become a favorite material of companies like MyForest Foods because of its ability to replicate meat-like textures and heterogeneity in a way that more traditional ingredients, like soy, have not. It’s little wonder that investors like Gary Hirshberg, of Stonyfield Farms, and Andrew Abraham, of Orgain, contributed to the young company’s pool of over $40 million.

“Our flagship product MyBacon, the world’s first whole-cut meatless bacon, is a great source of fiber, with zero cholesterol, and it’s nearly equal in protein content to traditional bacon,” says Eben Bayer, CEO and Co-Founder of MyForest Foods. “But our biggest differentiator from other alternative bacon products is MyBacon’s taste, thanks to the use of gourmet mushroom strains—known for their naturally rich, meaty flavor—and mycelium’s fibrous structure that mimics the texture and taste of meat. We put a lot of emphasis and care into perfecting the taste of our food, as we believe that you can only make a sustainable impact if people actually enjoy consuming it.”

Meati, with its crispy chicken cutlets to its steak filets, is another American company that’s building itself on the magic of mycelium.

“Unlike any other product on the alt-meat market, Meati is a true whole food with every cut more than 95% mycelium,” says Tyler Huggins, CEO and co-founder. “This means minimal processing and extreme purity, with all of the benefits and nutrition embedded naturally in the mycelium, as opposed to a bunch of additives or additional ingredients.”

There’s a lot of buzz behind Meati, from the $50 million the company raised in its most recent round of fundraising to its recent hire of Top Chef judge Tom Colicchio. (It probably doesn’t hurt a reporter at Fast Company described it as “stupidly good.”

Meati is available direct-to-doorstep through their website, as well as at some Colorado restaurant favorites. The company will also be piloting retail and food service programs with national partners this summer and expect to have a national footprint this fall, as their new ranch comes online and production capacity increases.

And land animals aren’t the only ones the plant-based industry is coming after with whole cuts. In fact, 80% of fish is consumed in the form of whole cuts, like filets. Not unlike plant-based chicken and beef alternatives, however, most of the veggie fish products on the market are styled after fish sticks or another kind of fishy ground. An Israeli company called Plantish is looking to change that. They’ve developed a plant-based salmon filet that’s meant to resemble the actual fish both in taste and texture.

“Salmon is the most popular fish in the United States so there is a huge opportunity for us to give people what they want,” says Ofek Ron, Co-Founder and CEO of Plantish. “We are just offering a delicious upgrade to salmon that is safer for you and better for the planet. No antibiotics, no hormones, no mercury, no bycatch, and no compromise.”

It will be at least a couple of more years before we can hope to see it in American grocery stores, but I’ll be eagerly awaiting it. In the meantime, the company will be launching Plantish salmon in pop-up locations at the end of the year.

Of course, all of these innovations are still miles away from standing in for a big, juicy New York strip. But keep in mind: less than a decade ago, a plant-based burger that bleeds was still unheard of. As money and brain power continues pouring into the plant-based food tech space, we’re likely to see mycelium – and probably other substances – turn into the butcher cuts of our meatiest dreams. I, for one, can’t wait to see what we’ll be serving up in the next few years.

Spanish Premium Wine Region Commits To 100% Tempranillo Wines
It’s Not Your Paradise: Something To Consider When Visiting Hawaiʻi
Current Foods Raises $18 Million To Accelerate The Expansion Of The ‘Beyond Meat Of Seafood’ Across B2B And Retail
I Removed My Engine, There’s No Turning Back! – Electric Camper Build Ep 2
Yellowstone reopens south loop with limited capacity after unprecedented floods