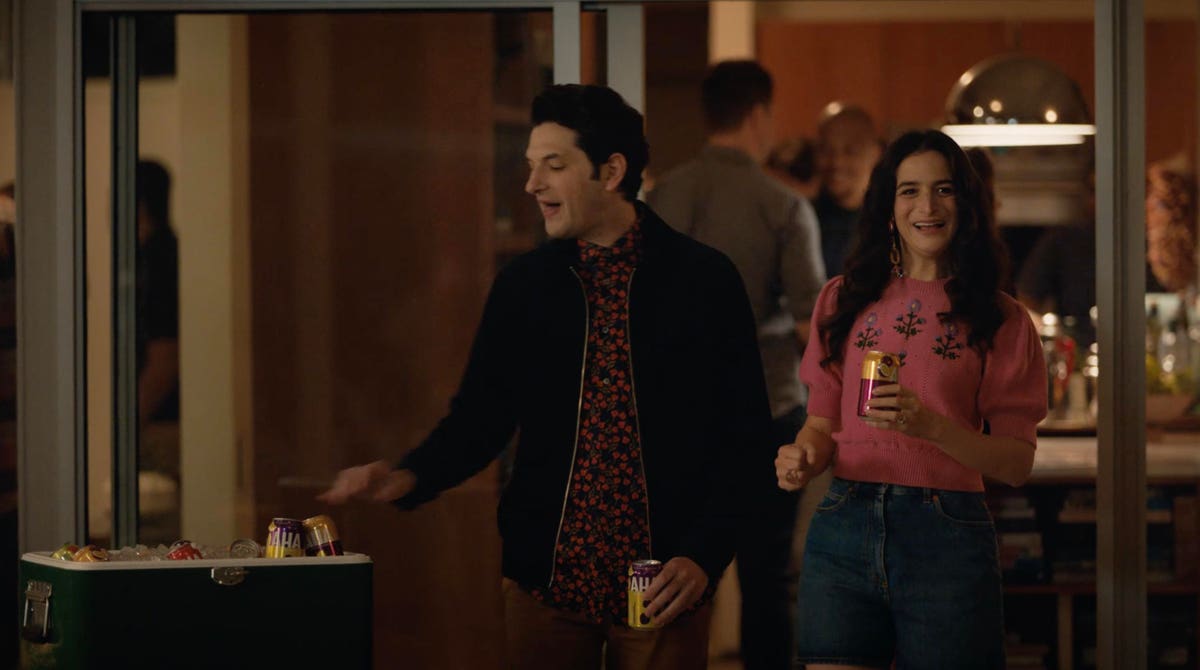 For millions of devoted Parks and Rec fans, Ben Schwartz and Jenny Slate will forever be linked as the mercurial Saperstein siblings. But in real life, the two enjoy a slightly less chaotic camaraderie. In fact, their friendship predates the NBC sitcom (they first worked together on Showtime’s House of Lies) and flourishes long after the series concluded in 2015.

On their own, it’s been a particularly auspicious year for both actors as Schwartz’ Sonic The Hedgehog 2 just recorded the biggest box office opening ever for a video game adaptation. Meanwhile, Slate’s I Want You Back is one of the highest-rated romcoms in years. Now the endearing duo have found a way to team up once again, this time in a new ad campaign for AHA Sparkling Water—Coca-Cola’s first new brand in more than a decade.

Their first spot goes live today and can be seen here:

To celebrate the occasion, Schwartz and Slate sat down with Forbes for an off-the-cuff conversation concerning everything from at-home mixology to the existential crises swirling around milestone birthdays. And while their partnership with AHA means they’re paid to promote the fizzy water, don’t be suspicious—they really love the stuff. Read the condensed interview below…

Ben, congratulations on the big opening weekend for Sonic.

Ben Schwartz: Jenny, did you know that I’m in a movie that had a big opening this weekend?

Jenny Slate: Is it the Sonic 2 movie?

BS: It is! Can you imagine when your kid is old enough, and I can leave them voice messages all day long as Sonic?

Jenny, you just celebrated a big birthday in late March. How are you dealing with the new number?

JS: I feel great. We’re all barreling towards the great unknown and death will come for all of us. So I just figure, why not party right now? I feel pretty good about it, but I had to remind myself that I don’t like big parties [for myself]. So I had a pretty low-key birthday, I will say. I had a tiny little dinner.

Growing up Jewish, seltzer was always a big part of my life. And I’ve noticed the same for a lot of my fellow Jews. You’re both Jews as well. So why do you suppose there’s this cultural component to loving fizzy water?

BS: That’s so funny. Growing up, my mom and dad would drink seltzer water all the time. Back then there was a glass thing of seltzer with the syphon. And now we have AHA that we can just purchase [by the can].

JS: I think it’s really refreshing and it does pair really well with the stuff in the deli. I hate to admit it but sometime’s water just isn’t enough for me. I need a tiny bit of surprise from nature’s flavors. And I really think that when you’re sitting down and you’re having a knish or something salty it’s a nice balance.

BS: Now that we’re breaking it down, I wonder if there’s a correlation between bad stomachs and seltzer being able to settle bad stomachs—which notoriously my friends and I who are Jewish have to deal with as well; cleaning everything out.

Speaking of which, any big plans for Passover?

JS: I don’t, but I love a giant Seder. As a kid I was terrified of gefilte fish and now I would eat it every day. I put that magenta horseradish on it and I love it.

Well there are so many celebrity spirits out there today, but I have yet to hear of a celebrity gefilte fish brand, so…

JS: Yeah guys, I just don’t feel like I can go that far. I don’t need to put my name on every fish ball that I know about.

What makes AHA different from all other soda waters?

BS: Brad—watch this…First of all, taste. Blackberry and lemon is unbelievable.

BS: For me, I don’t drink coffee. And so sometimes the way I can get a little bit of caffeine is through other beverages that have it. Their Fuji Apple + White Tea gives me a little bit of a boost. When I’m tired I can pop one of those. By the way, when Jenny and I were on set obviously we’re drinking them because we’re making a commercial for them, but literally in between takes, we’d be like… “This is actually great, guys!”

JS: It can be kind of a big challenge if you’re shooting [a scene] with something that you’re ingesting. Like…I cannot eat another bite of spaghetti, or whatever. But genuinely we could drink this seltzer for many, many hours.

JS: Although one time I did have to eat a hot dog in a scene. And I like a hot dog—I think they’re absolutely delicious. I love ‘em. The [crew] told me they had a spit bucket and I said I’m not spitting it out. I think ate about seven hot dogs, total.

Did AHA ever run into any issues with the beloved ‘80s Norwegian synth pop band that shares the same name?

BS: Oh yeah, Take On Me. A-ha has come after us. We’re gonna say, A-ha the band has definitely come really hard for Jenny and I, but then they saw the commercial [laughs]…

JS: I think they were a little mad at me—as I am angry at myself—for perhaps singing Take On Me in my college a cappella group and just battling for the solo.

BS: Oh my goodness. Can I tell you what I would give to see Jenny in college in an a cappella group. To see footage of that—someone in your family must have some, Jenny.

Canned seltzer naturally lends itself to at home-mixology. Have you started getting better at at bartending since patterning with AHA?

JS: After making this spot, I got really into it. It just never crossed my mind to make a refreshing cocktail. I was kinda just sitting down after putting my baby to bed with a beer and closing my eyes and drifting to infinity. Instead I was like…Let’s be classy.

JS: And who doesn’t want to be a little cutie with a cute little sparkling secret!