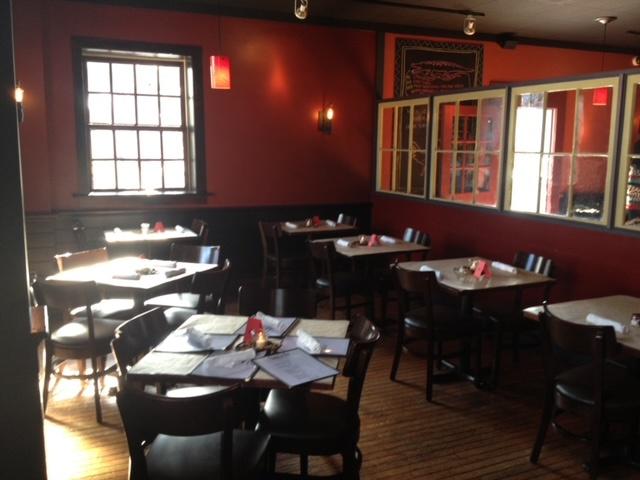 Jim Demosthenes grew up in a restaurant family. His dad started the Plaza Diner in New Paltz, N.Y., right off the New York State Thruway, and imbued him with a love of operating restaurants.

He started in the business at age 14 working the graveyard shift from 4 a.m. to 11 a.m. at Deisings Bakery in Kingston, where he stayed for six years.

Like Demosthenes, Weiss too has a long restaurant resume, starting as a dish washer at the Surf Club in Quogue, L.I. as a teenager.

But Demosthenes’ daughter, Georgia, who is 23-years old, lives in London, graduated from the London School of Economics and doesn’t seem destined to run a Mexican eatery. Nor does his young daughter Elisabeth since she’s in a Master of Science in Education program at Marist College in Poughkeepsie, N.Y. and intends to become an elementary school teacher.

Weiss’s son Theo is part of an Early College program at Simon’s Rock and Nikita is only 13 but is passionate about the arts so it’s too early to tell where their futures lie and whether it includes restaurant management.

What to do in terms of keeping the four Sante Fe eateries going since Demosthenes, is 59-years-old and Weiss, 58 years old, when they retire?

They expect to name a managing partner for their Sante Fe Woodstock in the fall, which will make four part-owners.

He said the three women all had one thing in common: understanding hospitality. “They make the customers as happy as can be, make them feel welcome, they have a smile on their face and nothing rattles them,” he pointed out.

Demosthenes said what prompted their plan was to “to keep the Sante Fe legacy going. The only way was to have people within your organization take over when you retire.” He calls it a five-year plan because at that point he and his partner David will be ready to hang up their owner status.

“I’ve been in the business for 40 years, and David is close to that,” he noted, suggesting that it was time to take a break from the grind of running a restaurant.

Having three operating partners relieved his stress because his daughters have made it clear that they’re not interested in the restaurant business, a decision he and his wife Annie respect.

Kellyn was born in Guatemala and is a naturalized citizen while Emily was raised in upstate New York in Esopus, and Roxana’s parents are from El Salvador, though she was born in the states.

“Each one paid a fraction of the percentage they owe,” Demosthenes explained. When the time comes when the two partners are ready to retire, “they will complete the purchase of their percentage and come to an agreement with the partners on purchasing, over time, the remaining part of the business as well,” he said.

Each of the three employees worked her way up the restaurant ladder, starting in entry-level jobs. “They went from being very hard-working employees with set shifts and hours to being managing owners,” affirmed Demosthenes.

Venditti and Roxana Guerra both started as servers, having had previous restaurant experience, and then moved on to bartend. “Finally we saw what great assets we had in them: hard working, smart, reliable, friendly and so we promoted them to managers at Sante Fe Uptown,” Demosthenes said.

Kellyn Guerra began as a bus person when she was younger and after a few years moved into serving, followed by managing. Having excelled so much, she was named a managing partner.

Each handles management issues. If the alarm goes off in the middle of the night, one of them is called to grapple with it. Or when a service person needs entry into the restaurant at 8 a.m. in the morning, Venditti or one of the Guerra’s arrive early with the key to let them in.

If a staff member calls in sick, one of the part-owners steps into the line to help the chef. Whatever it takes to get the job done. They also handle ordering, and learning how to order the best ingredients, and are “learning the ins and outs of hiring and staffing, along with paying attention to payroll,” Demosthenes noted.

Demosthenes also raised a concern that he had with them since each of them is either married, getting married or soon to be engaged. What if they had children, would they be able to maintain their commitment to Sante Fe? Each assured him that this was her livelihood and they would stick it out.

The two partners aren’t ready to retire—just yet. But Demosthenes envisioned five years down the road becoming a restaurant consultant and helping new eateries get started.

He acknowledges that the future of Sante Fe and other eateries won’t be easy. “I think about this all the time. How will the three of them keep this going? It’ll be a challenge.”