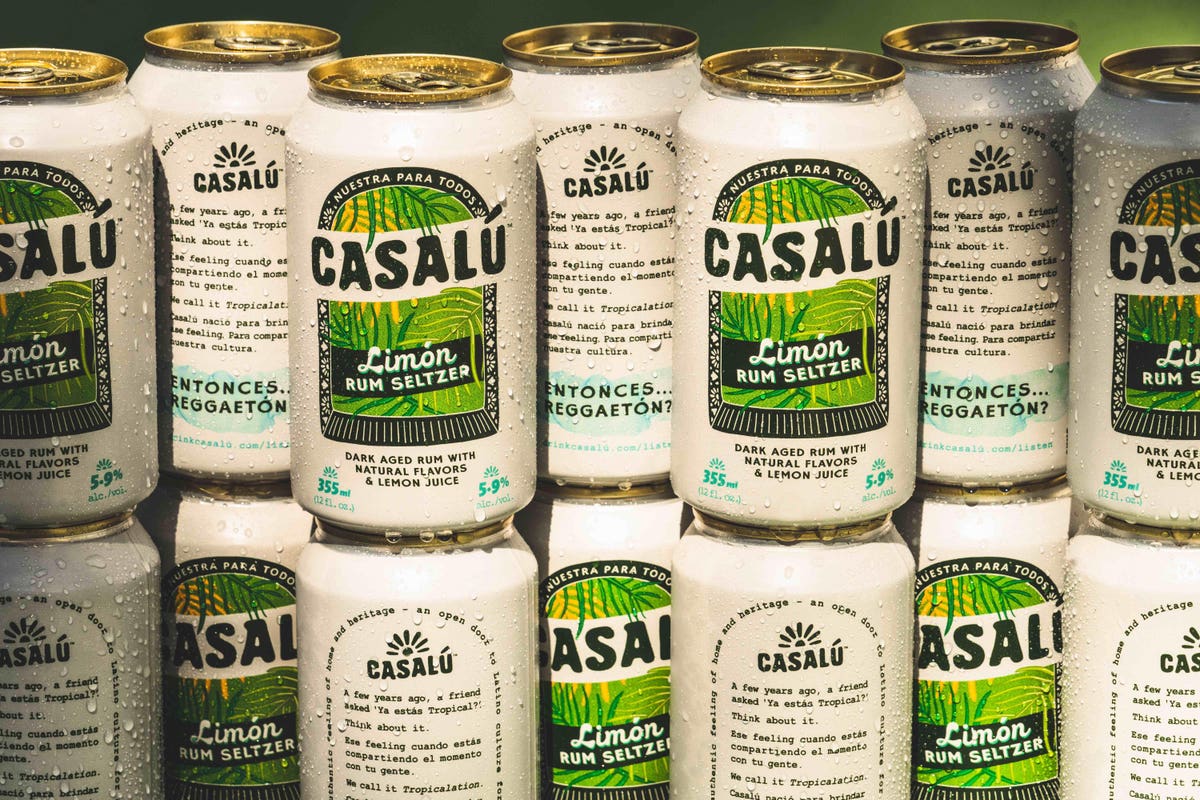 Ricardo Sucre is not a fan of beer. He’s a cocktail guy—and more specifically a rum cocktail kind of guy. During the lockdown periods of the pandemic, like many of us, he began turning to the ready-to-drink format to provide escape while many of his favorite local bars in Miami remained closed. The only problem was that most of these RTDs were made with vodka, tequila or even flavored malts. He couldn’t seem to find his preferred spirit of choice and so he decided to take matters into his own hands.

Partnering with his friends Gustavo Darquea and Gabriel Gonzalez the trio launched Casalú, a canned rum seltzer with a distinctively South American vibe—reflective of Sucre’s Venezuelan heritage. The drink debuted in Miami this April with a flagship offering combining dark rum with soda water and lemon juice. Cans of the 5.9% ABV liquid are already ubiquitous in their home market and they’re quickly finding fans among a national audience as they roll out across the US.

To get a better taste of rum seltzer and why the broader RTD craze continues to soar, I sat down with the founders of Casalú. Read their insight in the interview below.

What makes Casalú different from other RTDs?

Gustavo Darquea: RTD is a broad category but we like to focus on the hard seltzer world. We believe that a combination of elements are different. Casalú is made like a drink we would make ourselves at home. We don’t see it as a craft cocktail in a can. To the contrary, it’s the simplicity of Casalú that makes it so approachable. Our rum is actually a 2 year old dark aged rum, reminding us of the good rums we have back home. Even though our drink is something new, it feels like something we have had forever. That feeling can’t be replicated, our drink is just authentic and it doesn’t serve as a replacement to the craft cocktail you would want to get at the bar. Which many RTDs aim to be.

Why launch in Miami first?

Ricardo Sucre: Culturally, the Latino capital of the world. If Florida were to be a country, it would be the 6th highest consumer of rum in the world. The easiest way to explain it is the following: I walk into any store and talk to the person in charge of a new product, and tell him that I am making a seltzer for the Latino consumer. In Miami they have to listen. In NYC, or LA, they can afford to say ‘so what?’ So there is a bit less explanation to be made in our first market.

RS: It seems odd from the outside in, especially in the hard seltzer space that there are virtually no dark liquor-based brands. For us it was the most obvious option. There are several types of rum, but for us, ron añejo is simply what we drink. The backstory is that all of us went to NC State for school, we all grew up in different places of Latin America but ended up in Raleigh for college. Our crew from NC State was a bunch of Latinos from everywhere—Peru, El Salvador, Guatemala, Nicaragua, Ecuador, Venezuela, etc. And even though we all had different traditions we all bonded over our way of sharing and the drink of choice: Rum. The drink idea behind Casalú was born during the summer of 2020. Yet the pillar of our brand started brewing a long time ago, when we were all in college sharing our culture and realized this drink happened to be a shared trait for all.

What was the process like in developing the liquid, brand concept? Any fun stories you can share?

GD: The liquid started after Ricardo decided to make his own seltzer and bought a sodastream at Target and watched some Youtube videos on seltzer making. Because the liquid was so simple and only required 4 ingredients, the process was more about balancing the flavors as a chef would, than trying anything crazy. Over time friends’ feedback perfected that balance. It had an art and science component to it. Since it was made by Ricardo, in his kitchen, we knew exactly what we wanted. However, we needed an industrial formula that would standardize Casalú’s flavor profiles when entering large scale production. This added some complexity to our process of beverage creation.

Where do you see this going over the next 5-10 years?

RS: We believe Latino Culture is the next big driver of Pop Culture in the US and the World. Our vision is to be catalyst of Latino culture in the world. We say that Casalú is more than a drink, and we mean it. We will invest heavily in the Latino creative community to create moments, content, experiences that elevate Latino Culture. We are using Casalú as the perfect conduit to support all the things we love and that we consider pillars of culture creation: Music, food, sports, fashion, and art.

GD: When was the last time you followed an alcohol brand on social media? The truth is that there are some amazing brands out there but they focus only on their product. Within a year we want to push those boundaries. We want to create value for our audience by sharing the values and stories of Latino culture through our kick *ss rum seltzer. We aim to be in two new markets next year. In three years, be the new kid on the block making a significant cultural impact in the US and Latin America. Ten years? Well we should have Casalú FC, Casalú Records and maybe even Casalú Formula One team. It’s all about the culture!