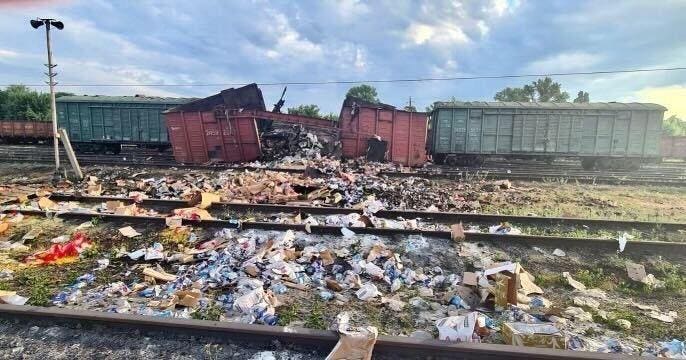 A dozen pallets of meat, two pallets of fresh vegetables, three pallets of fruit. There was fish, pasta, buckwheat and sugar. All on the way to needy families in Ukraine. All destroyed.

A Russian missile hit a train near Donetsk, Ukraine, on Wednesday that was transporting 34 pallets of food to be distributed by World Central Kitchen, chef José Andrés’ aid organization. The food never made it to the hungry Ukrainians, another example of how Russia has targeted food as its military struggles to succeed in its unprovoked invasion.

“The railway infrastructure, which was relatively unscathed early on in the war, is now a primary target,” World Central Kitchen executive director Nate Mook told Forbes. “This has become a battle on people and their ability to eat.”

Mook, who is back in Washington after 120 days spent feeding Ukrainians from Kyiv to Odessa, says attacks on trains are increasing just as rail has become one of the main ways to transport food due to the Russian blockade of the Black Sea. Russian diplomats are currently trying to negotiate the easing of sanctions in exchange for a safe corridor to export key agricultural exports like wheat and sunflower oil. Exporting that food is necessary as pockets of starvation worsen around the world. Timing is critical. In East Africa, one person is likely dying from acute hunger every 48 seconds, according to a report released in May by Oxfam.

“It doesn’t seem like there’s any interest for Russia to let any of the food leave Ukraine,” Mook says. “They’re trying to blackmail the world by saying, we’re going to starve people to death around the world unless you release sanctions.”

A spokesperson for the Russian government didn’t immediately respond to a request for comment.

Russian troops have recently shot missiles at grain silos and destroyed railway infrastructure meant to move grain, according to the Ukrainian government. Russian combatants have also stolen as much as 500,000 tons of grain from occupied areas and tried to sell it on the international market, the Ukraine government said. With food as a target, Mook says he’s concerned about his organization’s 4,300 volunteers in the country.

“We basically have to operate on the assumption that we will be targeted, specifically, even though we are not part of the fighting,” Mook says.

An estimated 20 million tons of grain are trapped inside Ukraine’s grain silos. The diminished supply is contributing to rising prices. Much of that would have been exported to countries in Northern Africa and the Middle East. Now that the wheat harvest starts at the end of this month, more storage space is needed, and if more room isn’t made soon, a lot of grain could go bad while tens of millions starve around the world.

If Russia doesn’t lift its blockade of the Black Sea ports, which typically ship some 30% of the world’s exported cereal grains, Ukraine would only be able to export as much as 2 million tons a month, or one-third of what it previously was able to ship monthly. Even if Russia does lift the blockade, there are mines across many of the ports, placed by both Russian and Ukrainian combatants, that still would need to be cleared before ships could pass safely.