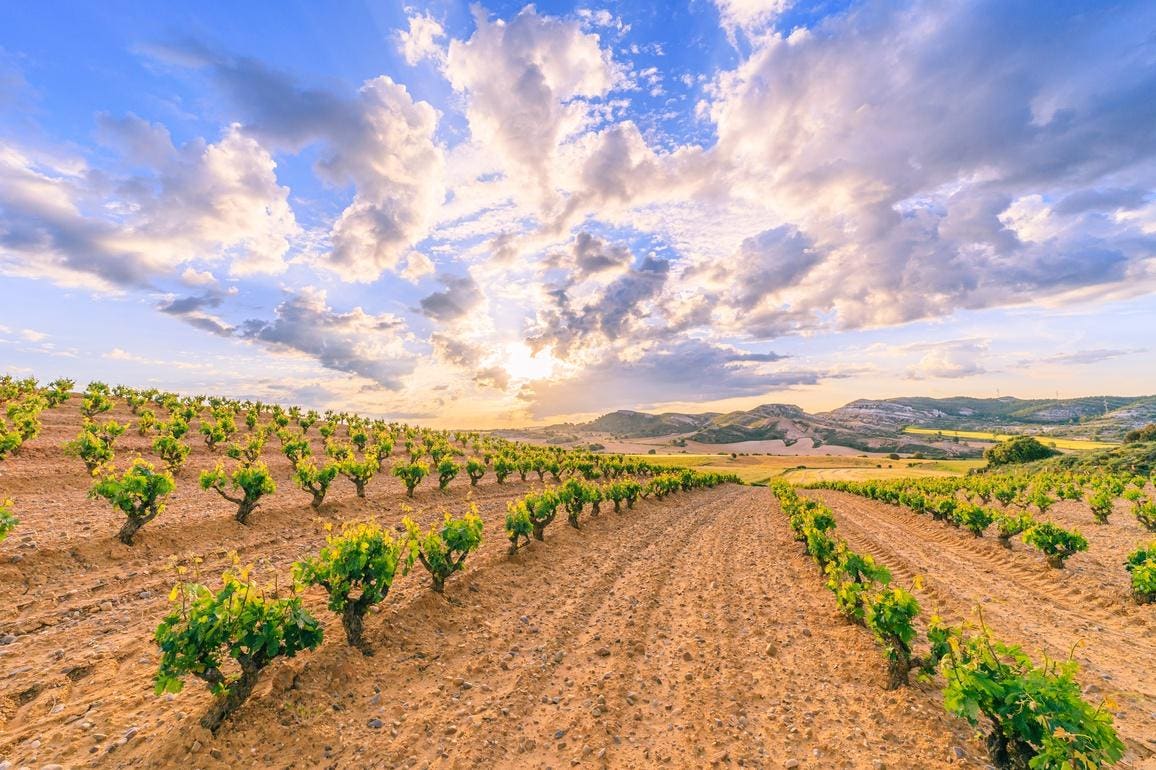 The incredible smells of thick steaks cooking over a wood fire fueled by grapevines encourage drool to form at the guests’ mouths as they eagerly wait in anticipation for a meal of a lifetime. The large centuries-old kitchen had festive Spanish music playing in the background as the multi-course meal with free-flowing wine brought everyone along a journey that was a magical dining experience. All the good things in life could be enjoyed in one place, the home of a winemaking family who were also restaurateurs who loved nothing more than to host people in their ancient family home tucked away in a tiny town in the Spanish wine region of Ribera del Duero.

Although Ribera del Duero is a well-known wine region, some parts of the area are less known than others, such as where the Sanz family has their Bodegas Severino Sanz winery in the small town of Montejo de la Vega de la Serrezuela, which only has around 100 residents and one other winery in the town. The winery is run by three brothers who named it after their father, Severino Sanz, and not only does everyone in the family work hard to keep the winery and ancient family home going while juggling other jobs but they have also taken on the responsibility of recovering enormous ancient olive oil presses that are part of the legacy of the area as well as continuing the laborious task of propagating old bush Tempranillo vines by using the traditional “layering” technique in their vineyards.

Tempranillo is a native red grape from Spain that takes on different local names in various Spanish wine regions. In Ribera del Duero it is either called Tinto Fino or Tinta del País. The differences in names reflect how the variety has taken on slightly different characteristics over centuries due to the influence of its environment. Ribera del Duero is a much more extreme grape growing place, as opposed to its famous neighbor Rioja, as swings in temperatures can be pretty intense and it can get brutally cold there with frost issues. Due to such conditions, the Tempranillo grapes in Ribera del Duero typically have thicker skins and a more intense concentration of flavors.

Just like Rioja, Ribera del Duero has blended small amounts of other native red varieties into their red wines. Yet, unlike Rioja, Ribera del Duero has a long history of using red Bordeaux varieties such as Cabernet Sauvignon and Merlot. It was viewed at one time that Tempranillo needed some help from Bordeaux varieties to make high-quality wines that could compete on the same level as the top Bordeaux wines. Yet there have been famous producers such as Pesquera who have championed 100% Tempranillo wines in Ribera del Duero; however, it hasn’t been as easy for lesser-known struggling wineries in the area. But today, there is certainly now a strong commitment even among these struggling producers as many have come to the viewpoint that no other grape can do as well as Tempranillo in Ribera del Duero, Spain.

The Sanz family, who runs Bodegas Severino Sanz, actually takes their commitment to keeping the soul of Ribera del Duero Tempranillo alive by using the arduous “layering” technique. Grapevines can asexually reproduce and so if one buries a shoot coming off of an existing old bush vine right next to it in the ground, the buried shoot will be able to grow roots from the buds dormant in that shoot. Through time, a vine, which will be trellised as a bush vine, will grow and be an extension of that old vine. The mother and the new daughter vine (produced from the mother’s shoot) will stay connected, or sometimes producers like to cut the “cord”, but Bodegas Severino Sanz likes to keep them connected as long as they can.

The new vines are called murón and hence why Bodegas Severino Sanz calls their wines “Murón” as it represents their commitment to keeping the DNA of the old vines alive for generations to come. Starting with their 2018 vintage, they began to use 100% Tempranillo instead of placing a small amount of 5% Garnacha, as they now feel there is nothing better than the Tempranillo from their vineyards.

Another multi-generational producer, Bodegas S. Arroyo, located in the heart of Ribera del Duero in Burgos, has noticed over time that no other variety adapts as well to the extreme climatic conditions in Ribera del Duero as Tempranillo, as it is a grape that many feel has been in the area for thousands of years even though it has only been appreciated in recent times. All of their red wines are made from 100% Tempranillo which is a strong statement as one of the family owners, Iker Ugarte, is the current president of ASEBOR, an association of Ribera del Duero wine producers.

A winery in another known area of Ribera del Duero, Valladolid, called Bodegas Señorío de Bocos, still has a small amount of Cabernet Sauvignon and Merlot planted in their vineyards which they plan to replant to Tempranillo since all of their wines are only 100% Tempranillo now.

But despite the enthusiastic embrace of 100% Tempranillo wines, no one can deny that Ribera del Duero has some old, legendary plots of Cabernet Sauvignon and Merlot. One of the greatest wine estates in the world is located in Ribera del Duero, Bodegas Vega Sicilia, and Bordeaux varieties are a part of their incredible history so there are still old Cabernet Sauvignon and old Merlot vines on the Vega Sicilia estate that makeup only a tiny portion of the blend in their iconic Unico and Valbuena 5 respectively.

A boutique winery called Bodegas Finca La Capilla, which values the uniqueness of each of their Tempranillo vineyards located in the heart of Ribera del Duero, has kept an acre of old Merlot vines close to their winery still in production. It only makes a tiny amount but they said that their customers love it as it is a very complex, elegant wine with a good structure that perfectly expresses that plot and it sells out quicker than they can make it. And so, although they are big advocates for the great affinity for Ribera del Duero terroir that Tempranillo expresses, this small plot is best represented by 100% Merlot.

Legacy of a Place

One cannot help but be in awe when observing the lengths the Sanz family goes to in order to keep the torch lit that keeps the legacy of their tiny town going, as many of the younger people are moving to bigger towns with more opportunities. Whether it is the unearthing of 100-year-old olive oil presses or hand layering old bush vines so they can propagate a child vine as close to the mother’s DNA or creating an unforgettable night for those visitors who drive out to the middle of nowhere to see them, it is all about keeping a wonderful way of life thriving.

One cannot help but observe that nothing makes the Sanz family happier than bringing joy to others – as all of it means nothing to them if the outside world cannot experience the paradise of food, wine, history and unbridled conviviality that the Sanz family keeps alive.

2018 Bodegas Severino Sanz ‘Murón’ Crianza, Ribera del Duero, Spain: 100% Tempranillo. Aged in French oak for 12 months followed by five months in bottle. Deep, dark blackcurrant flavors with hints of earth and cumin with soft tannins and a touch of vanilla on the finish.

2019 Arroyo, Roble, Ribera del Duero, Spain: 100% Tempranillo. Roble notes that it is a young wine that hasn’t spent too much time aging. In this case, it has spent four to six months in a combination of American and French oak followed by eight months in bottle. American oak and Tempranillo have had a long and wonderful partnership in Spain. A savory nose such as cured meats and dried thyme is balanced by blackberry fruit and hints of baking spices.

2018 Arroyo, Crianza, Ribera del Duero, Spain: 100% Tempranillo. Crianza is the next level up in aging and, in this case, spends 12 months in a combination of American and French oak followed by 12 months in bottle. Bacon bits, cumin and dusty earth on the nose with a touch of more texture and structure with sandalwood incense on the finish.

2016 Arroyo, Reserva, Ribera del Duero, Spain: 100% Tempranillo. Reserva is the next level in aging after Crianza, and so in this case, it is aged for 15 months in American and French oak followed by 24 months in bottle. Dried leaves, cinnamon and sweet tobacco on the nose with black cherry and espresso flavors on the full-bodied palate with well-integrated tannins.

2012 Arroyo, Gran Reserva, Ribera del Duero, Spain: 100% Tempranillo. Gran Reserva is the next level after Reserva, and in this case, it has been aged for 24 months in a combination of American and French oak followed by 36 months in bottle. Intriguing nose with smoldering earth, bright red cherry fruit, cocoa nibs and forest floor – really complex yet has a beautiful lifted purity of fruit among the complexity.

2020 Bodegas Finca La Capilla, Merlot, Ribera del Duero, Spain: 100% Merlot. Only around 6,000 bottles made. One sip and one realizes why they kept this Merlot plot as it is simply an outstanding wine. Dripping with elegance and finesse, this wine enchants and seduces with pristine blackberry and blueberry fruit, hints of broken limestone, pencil shavings and fresh porcini mushrooms that has a stunning texture, like fine lace, and a great precision across the very long finish.