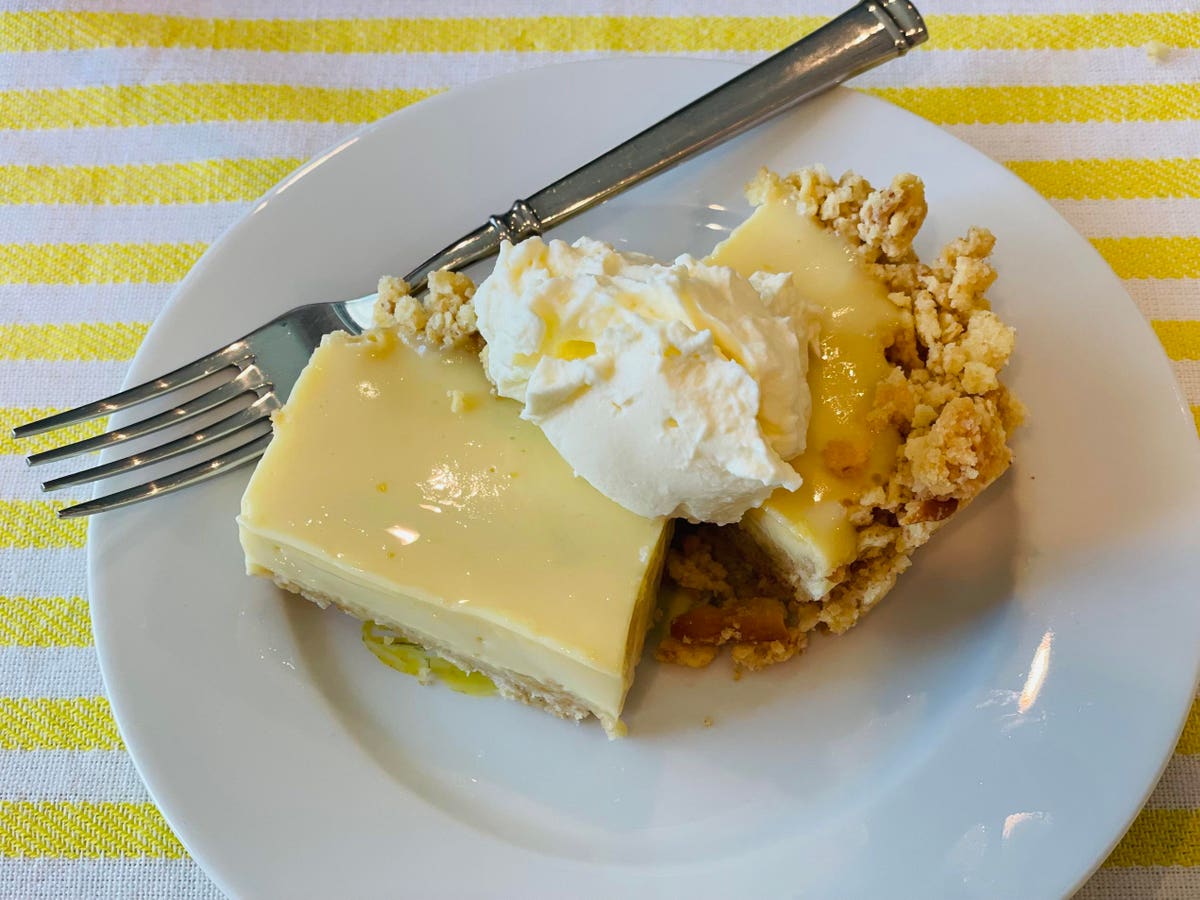 Because he has popularized this simple regional pie, it is no longer just a recipe written on a faded index card or in an old community cookbook. It has become such a “thing” that Ohio-based Jeni’s Splendid Ice Cream created an Atlantic Beach Pie flavor a few years ago.

One of my favorite memories of Bill Smith was visiting him at his restaurant, Crook’s Corner, on a day that the restaurant was closed. But that’s not to say that there was no activity in the kitchen. The restaurant was closed but Bill himself was making dozens of Atlantic Beach Pies for a special event that he was hosting. As we spoke he took sheet trays full of 9-inch pies in and out of the oven gracefully like he was dancing. He has made these pies so many times that he didn’t miss a beat, continuing our conversation as if we were sitting next to each other chatting at leisure.

Like Bill, I also grew up with this thick and creamy tart and sweet lemon pie. I remember it mostly from the fish joints in Morehead City which is across the bridge from Atlantic Beach, North Carolina. It was also one of the easy and foolproof Girl Scout recipes that our troop baked with ready-made mini graham-cracker pie shells.

In researching this recipe, I found that the filling was almost always the same, lemon juice, lime and lemon juice, or sometimes key lime juice; sweetened condensed milk and egg yolks. Occasionally, lemon zest and a pinch of salt were added but it is essentially three ingredients. The pie was often served bare on the plate where you could see the jiggle of the filling, or sometimes a meringue— made from the leftover egg whites—topped it.

As far as I can recall, the pie was mostly made with a pre-made graham cracker crust which was good but not great. When I read the recipes in community cookbooks, I discovered that vanilla wafers and Ritz crackers were also used to make the crust.

Most often, the pie was listed simply as Lemon Pie. You can also find the recipe entitled Lemon Icebox Pie, Down East Lemon Pie, or even Lemon-Milk Pie but everyone knew that it was the cold, creamy sweetened condensed milk-lemon pie.

Bill Smith re-named the pie Atlantic Beach Pie in honor of the fish houses and the tradition of eating this tart lemon pie after a seafood dinner. He says that his mother taught him that any other dessert after seafood would render one ill. Whether that is true or not, it is true in North Carolina that a lemon dessert was the preferred “choice” after a menu of seafood.

Bill does not claim to have created the pie, but he certainly popularized it. I personally think he improved it. The genius of Bill Smith’s Atlantic Beach Pie is the buttery saltine crust and the real whipped cream on top. The perfect bite is a bit of the crunchy slightly sweet and salty crackers filled with the milky sweet tart jiggly pie and soft pillowy whipped cream. It really is OMG good and that is the real reason that it has become a thing!

There are embellished recipes out there that use egg white or corn syrup to bind the crust, but you don’t need to add them. If you wish, you can add a little more butter so the crumbs bake solidly.

I’ve adapted Bill’s recipe to use a disposable 8-inch square pan with lid so that the dessert is easy to transport and you can get 12 squares out of the “pie.” I like my whipped cream plain with no sugar so it balances out the sweet of the condensed milk but if you like things on the sweeter side, add a bit of sugar to the cream.

However you serve it, it is a terrific dessert to bring to any event or meal—with or without seafood. We have Bill to thank for bringing “that pie” back to our summer tables.

This recipe is based on Bill Smith’s recipe for Atlantic Beach Pie. I’ve changed the measurements and the baking pan but kept his ratios the same. Bake the day before you want to serve it and keep refrigerated until just before serving.

½ cup lemon or lime juice, a mix of the two, or key lime juice

Add cracker crumbs to a bowl and add sugar; stir to combine. Add the softened butter and work through all the crumbs with your hands. I wear a kitchen glove and smush the butter and crackers together breaking up any pieces that I think are too big.

Work the butter in with your hands until the crumbs hold together. If the crust is too crumbly, add the other ½ stick of softened butter. Press into and up the sides of an 8-inch square pan or a 9-inch pie pan.

Freeze for 15-20 minutes, then bake for 16-18 minutes or until the crust gets a little color. The crust doesn’t need to be cold before filling it, I let it cool for 10 minutes.

Make the filling: In a medium bowl, whisk egg yolks into condensed milk, then whisk in the lemon or lime juice (or both), and salt, making sure to combine them completely.

Pour into the shell, and bake for 16-18 minutes until the filling has set—I baked for 18 minutes and it was perfect.

Let it slowly cool to room temperature and refrigerate until completely cold, 6 hours or overnight. At this point, it can also be frozen if you aren’t serving it immediately.

Serve with a generous dollop of fresh whipped cream.

*(Bill Smith retired after 25 years as the chef of Crook’s Corner and the restaurant closed in June 2021—but stay tuned, it may re-open.)

Frontier Airlines gets rid of telephone customer service
Blind Tasting Wine With The Most Famous Wine Consultant In The World
Holiday Gift Guide 2022: The Best Kitchen Gifts For Food Lovers
The Other Black Friday: Do Your Part To Put Hunger Relief In The Black
F1 Star Fernando Alonso Lives the Sunreef Eco Life