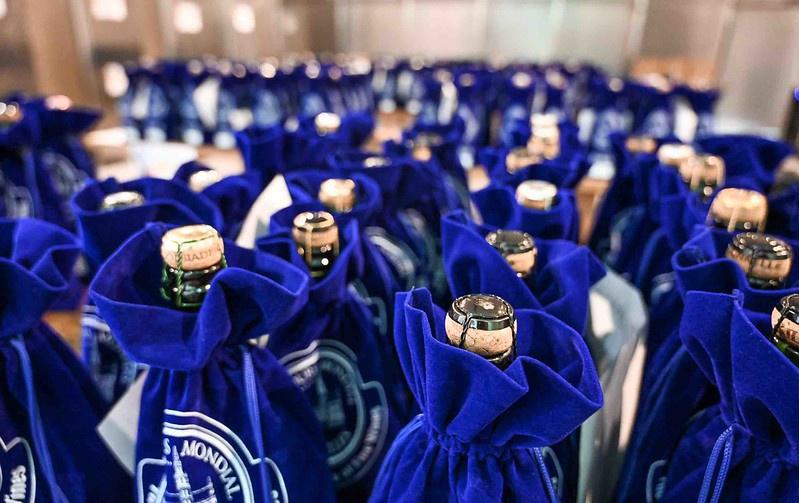 The Bairrada wine region produces approximately 7.5 million bottles of sparkling wine a year which represents over half of the sparkling wine produced in Portugal. This designation made it the perfect region to host the competition. The area has the ideal climate to produce quality wine because of its proximity to the Atlantic Ocean and its hot, sunny days and cool nights. This diurnal temperature shift allows excellent concentration of sugars while at the same time maintaining acidity .

The top 3 countries by number of entries in the Sparkling Wine Session by Concours Mondial de Bruxelles were the 3 top global exporters of sparkling wine –Italy (291 entries), France (270 entries) and Spain (165 entries). Their sparkling wine exports represent respectively 23%, 15% and 7% of their total 2021 export volumes and 26%, 35% and 16% of their total 2021 wine exports by value.

The host country Portugal ranked 4th with the majority of entries from the region of Bairrada where over 50% of Portuguese sparkling wines are made. Belgium came 5th for the number of entries in the competition. In 2021, the country emerged as the fastest-growing exporter in the European Union with 29 million liters of sparkling wine.

Many medals were given to award winning wines in three categories: Silver, Gold, and Grand Gold. It is important to note that wines submitted from the Champagne wine region won numerous medals in all three categories as well as this year’s “International Revelation Trophy.” The Vincent d’Astree Brut 1er Cru Champagne revealed the varietal composition as 80 percent Meunier and 20 percent Chardonnay grapes grown in some of the best vineyards in Champagne. Many well-known Champagnes are made from Chardonnay and/or Pinot Noir with just a touch of Meunier.

Of note as well is that the Sekt category from the Czech Republic garnered numerous metals. Many of these sparkling wines were made from Chardonnay and Pinot Noir, but they were also made from lesser-known varieties such as Welschriesling, Rivaner, and Grüner Veltliner.

The Concours Mondial de Bruxelles has long been recognized as one of the leading and most important international wine competitions in the world. Wine consumers have long trusted that a CMB medal on the outside of the bottle assures quality wine inside the bottle.