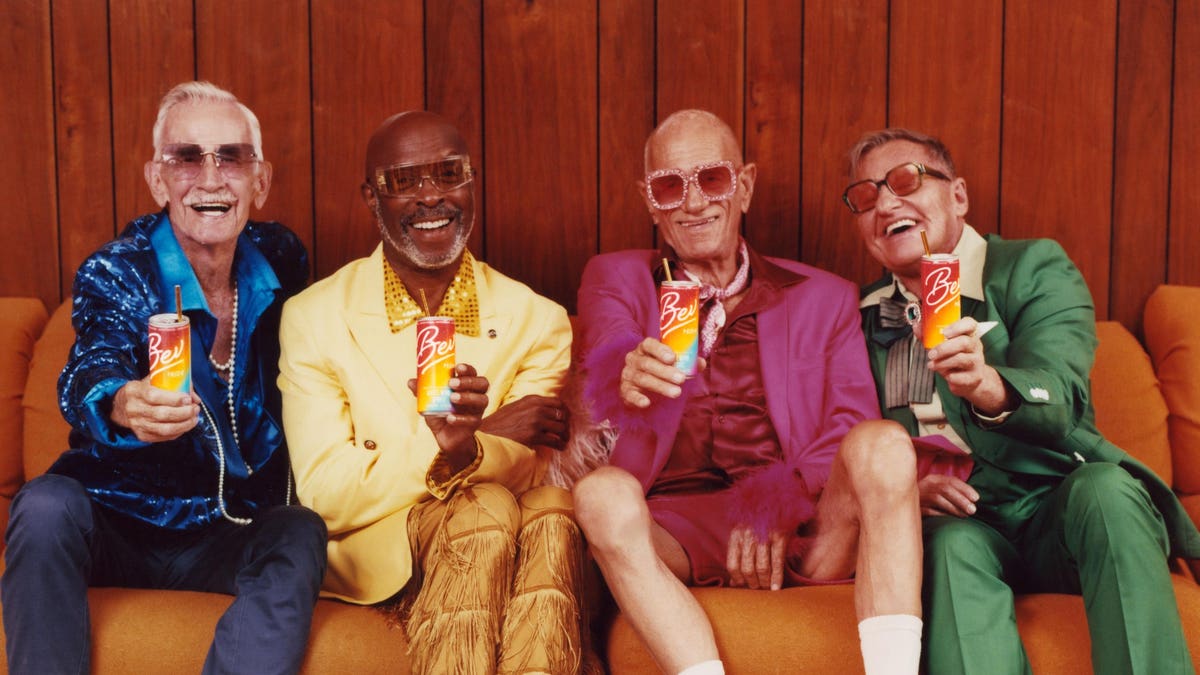 Often these days, when an alcohol brand is looking to launch a new product line, they will roll out a marketing campaign that focuses on their key demographic—usually, young Millennials. To reach them, they will work with social media influencers that closely resemble their target customer. It’s a tried and true program that, while garnering eyeballs, can often come across as tinny and deaf to the entire drinking public.

That feeling is why Bev, the five-year-old canned wine company based in Venice, California, decided to reach out to the most unlikely group of individuals to anchor their first ever wine spritzer, the Old Gays.

A quartet of gay men in their 60’s and 70’s they have blown up on TikTok with their irreverent and lighthearted videos that center on the four of them dancing, dressing up, and generally acting silly while sending out a message of acceptance. With almost 7.5 million followers, they have recently been featured on the Today Show and had articles written about them in the New York Times and the LA Times.

Their uniqueness and wholehearted embrace of community are what caught the eye of Bev. Especially since their campaign to roll out their Bev Pride Spritz was aimed for launch during Pride Month in June, right at the beginning of the summer drinking season.

“We were thinking about how do we show up for Pride in a way that other brands have not, how do we go against the grain and actually pull some folks in who are unexpected for brands like Bev?” says Paul Collins, the SVP of brand and marketing for Bev. “For us, our target market tends to be younger millennials and Gen Z, so the idea was how do we bring in a group of people who don’t look like our targeted demographic yet are able to represent Pride and help us expand our market and work towards creating a community. We thought the Old Gays were perfect for that.”

As a woman-founded and run company, Bev’s stated mission is “transforming social spaces by creating a drinking culture that inspires equality, embodies inclusive fun, and powers communities for the better.” The company has been on a hot run raising close to $24M to date from a wide array of investors. One of them is the actress Halle Berry, who is featured in the “Serving Pride” campaign video rolling out Pride Spritz with the Old Gays.

Inspired by the television show Charlie’s Angels, it sees her calling the four men and telling them that the world has forgotten what it means to be iconic and needs a reminder of what it is to live your best life. Each man talks about an iconic moment in their life in the tongue-in-cheek humorous slant that has drawn people to the Old Gays.

The willingness to step outside the norm and try something new is baked into the DNA of Bev and drives their decisions. So far, it has fueled continual growth and landed the brand in most major retailers across the country.

“We don’t want just to be a beverage company. That’s just one part of who we are. We are a female-focused media and product platform that connects people in a healthy way,” says Collins. “Over the long term, we want to serve as a platform that specifically focuses on creating video, music, and written content that educates the world today. We have a two-pronged growth strategy; one is around product innovation, and the other is around the media platform we’re building out. This campaign with the Old Gays fits both perfectly.”

Though Pride Spritz is only slated for a summer run, Bev plans to roll out more spots from the Old Gays online and might do another one where the boys meet up with Halle for a happy hour. For this run, 10% of every purchase is donated to wayOUT, a non-profit organization that seeks to empower LQBTQ+ youth to feel safe and secure in their identity. If the product, which is sold in specific retail locations and online, does well, chances are it might become a full-time, along with some new SKU’s planned for Q1 of 2023, according to Collins.