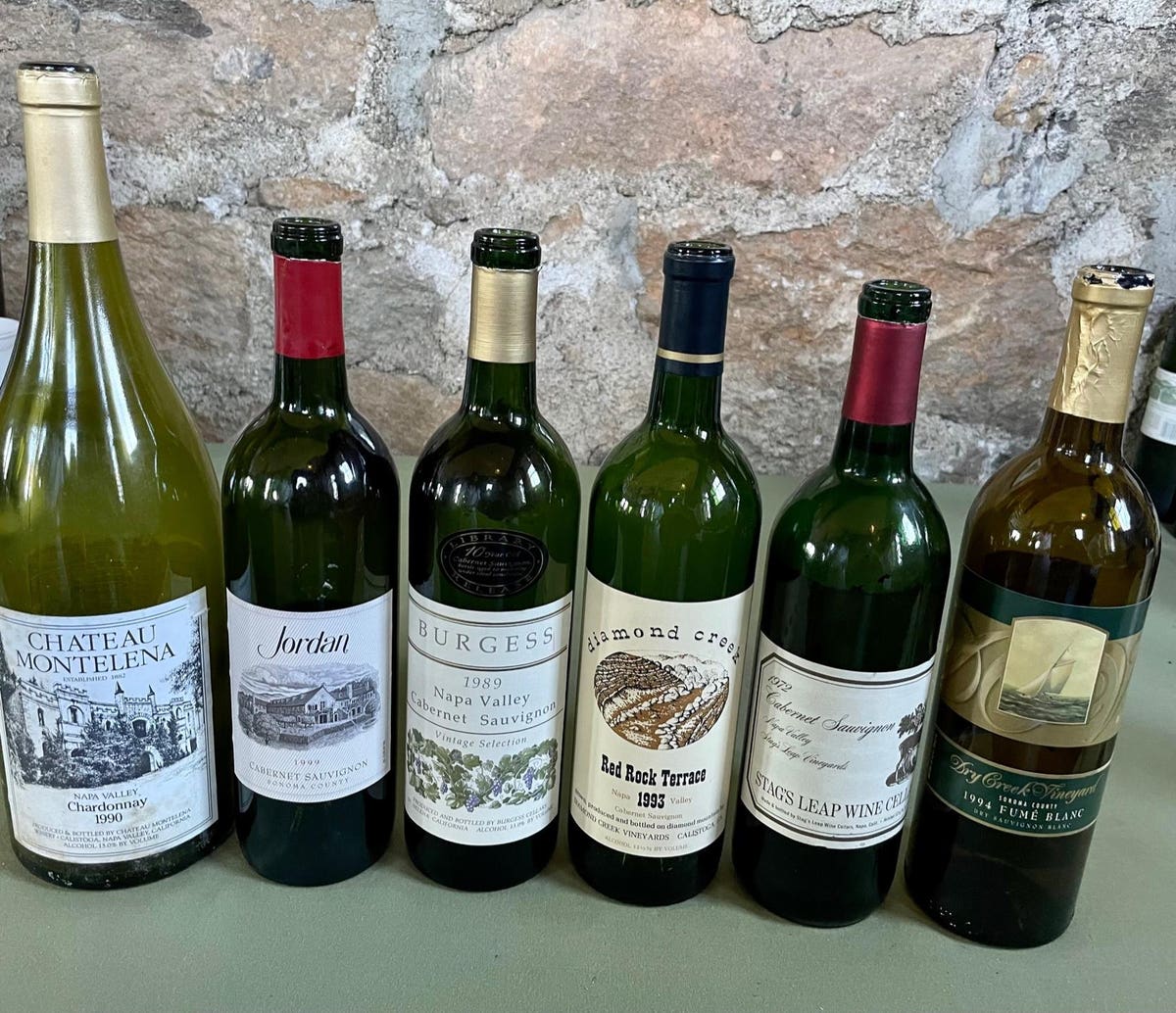 This past week at the Culinary Institute of America at Greystone, six historic wineries from Napa and Sonoma gathered to celebrate five decades of fine winemaking as part of the ‘Class of 1972.’ Considered by some to be the ‘cool kids of California wine,’ these wineries were part of a cohort that helped to put California wine on the map. With such famous players as Stag’s Leap Wine Cellars, Burgess Cellars, and Jordan, many of these wineries were established fifty years ago this year, or within just a year or two of the magical 1972 date. Indeed, some wine professionals consider 1972 to be the best year ever for American winemaking.

“We couldn’t let the year 2022 end without doing something to celebrate the class of 1972,” explained Lisa Mattson, Creative Director for Jordan Vineyards & Winery in Sonoma County, and organizer of the historic tasting. “California wineries from the class of 1972 are known to have produced some of the finest wines in America. Therefore we reached out to several wineries that were established that year, or were just starting to produce wine during that vintage, and asked them to participate in this special tasting.”

Each of the six wineries showcased three wines from various vintages, and several discussed the different winemaking practices that were used in the 1970’s compared to today.

“In the 1970’s we were adding stems to the blend, using very hot fast fermentations, and filtering the wine before putting it in barrel,” explained Luis Contreras, Assistant Winemaker with Stag’s Leap Wine Cellars. These methods are in contrast to today’s cooler and longer fermentations, very careful sorting of grapes so that no stems or pips are included in the tank, and no or very minimal filtration. Stag’s Leap’s 1973 Cabernet Sauvignon is the red wine that came in first place in the Paris Wine Tasting of 1976, also known as the Judgment of Paris.

Matt Crafton, Winemaker with Chateau Montelena (a historic winery that was resurrected by the Barrets in 1972), described how they used to craft their chardonnay in the 1970’s. “The chardonnay grapes used to be harvested in the heat of the day,” Crafton reported. “And fermentations were warmer because we didn’t have the sophisticated cooling mechanisms we have today.” The 1973 Chateau Montelena Chardonnay was the first place white wine in the Judgement of Paris.

Despite the rather rustic winemaking practices that were used in the 1970’s, the wines presented still tasted very vibrant with crisp acidity and complex tertiary notes. It was interesting to compare the older vintages with the fresh fruit-forward style found in many of the more recent vintages.

Highlights of the Greystone Class of 1972 Tasting

Following are the wines that were presented by each of the six wineries, along with comments on the stand-out vintages:

Jordan Vineyard & Winery wines, presented by Dana Grande, Grower Relations Manager, were: the 1999 Jordan Cabernet Sauvignon, 2005 Jordan “Super Blend,” Magnum, and 2018 Jordan Cabernet Sauvignon. While the younger wine was delightful in its early stages of fruitiness, both the 1999 and 2005 highlighted the benefits of aging the well-structured, yet elegant cabernet sauvignon’s of Alexander Valley. The 2005 Jordan Super Blend was especially vibrant with complex cassis, cedar, coffee and earthy components.

Chateau Montelena wines, presented by Matt Crafton, Winemaker, were: the 1990 Chateau Montelena Chardonnay in Magnum, in contrast to the 2019 Chardonnay, along with a 2002 Estate Cabernet Sauvignon. Though the cabernet illustrated much complexity, the contrast between the two chardonnays was stunning – with the 1990 vintage, a deep yellow in color, expressing a creamy caramel complexity compared to the fresh yellow peach and melon of the younger wine.

Burgess Cellars wines, presented by Meghan Zobeck, Winemaker, were: the 1989 Cabernet Sauvignon, 1999 Cabernet Sauvignon, and the 2021 Sorenson’s Reserve Cabernet Sauvignon. These wines all illustrated the elegance, crisp acidity, and lighter oak for which Burgess is known, but the 1999 was especially shining with aged black current, truffle, oolong tea and a touch of oregano wrapped in silky tannins.

Diamond Creek Vineyards wines, presented by Nicole Carter, President, were: the 1993 Red Rock Terrace, 2001 Red Rock Terrace, and 2018 Red Rock Terrace. Here, both of the older vintages completely captivated, expressing the iron rich soil of this famous vineyard, with notes of dried berries, tea, wet stone, and wild herbs. Both wines were still incredibly expressive with excellent concentration and a very long finish. The 2018 was delightful in its expression of dark berries, iron and rhubarb, but will benefit from more time in bottle.

Stag’s Leap Wine Cellars wines, presented by Luis Contreras, Assistant Winemaker and Kirk Grace, Vineyard Manager, were: the 1972 S.L.V. Cabernet Sauvignon, 2002 S.L.V. Cabernet Sauvignon, and 2019 S.L.V. Estate-Grown Cabernet Sauvignon. Here the perfume of this famous vineyard was immediately present in all three wines, but especially the two older vintages. It was a treat to taste the 1972 – the precursor vintage to the 1973 that won the Judgement of Paris – even though it was quite light in color with complex tertiary notes. However, it was the 2002 vintage ($110 per bottle) that really ‘sang’ during the tasting, with its potent perfume of violets, berries and morels filling the room.

Dry Creek Vineyard wines, presented by Tim Bell, Winemaker, were: the 1994 Fumé Blanc, 1997 Reserve Zinfandel, and 2019 Somers Ranch Zinfandel. As one of the only California wineries to still be using the term ‘Fumé Blanc’ on their sauvignon blanc wines, it is only fitting that this wine was one of the show-stoppers of the tasting. It’s rich heady nose of lemon, fig, dried grass, and hazelnut continued to jump out of the glass during the whole tasting. It explains why Dry Creek Vineyard founder, Dave Stair, was one of the first to plant sauvignon blanc in the Dry Creek Valley, along with zinfandel. Both zinfandels were well-balanced with complex berry, sage, and chocolate wrapped in a crisp acidity.

The tasting clearly illustrated why the Class of 1972 wineries gained such renown on the world stage. Even after fifty years, most of them are still prospering and producing world-class wines. To conclude the historic tasting, all winery and media guests were invited to a reception in the Historic Barrel Room of the CIA-Greystone. As part of the celebration, winemaker Tim Bell of Dry Creek Vineyard had crafted a special 50th Anniversary Sparkling Chenin Blanc with a touch of cabernet franc added to the blend. With its distinctive pewter label, it was a fitting finale to a historic reunion.

The great unrest: How 2020 changed the economy in ways we can’t understand yet
Teaching My Sister Skateboarding | Louis Cole Daily Vlogs 198
North Korea is destroying sites at the Mount Kumgang resort area
The A380’s biggest supporter is asking Airbus to build a new super jumbo
They came for a beach holiday. Now they’re trapped in China’s latest Covid lockdown