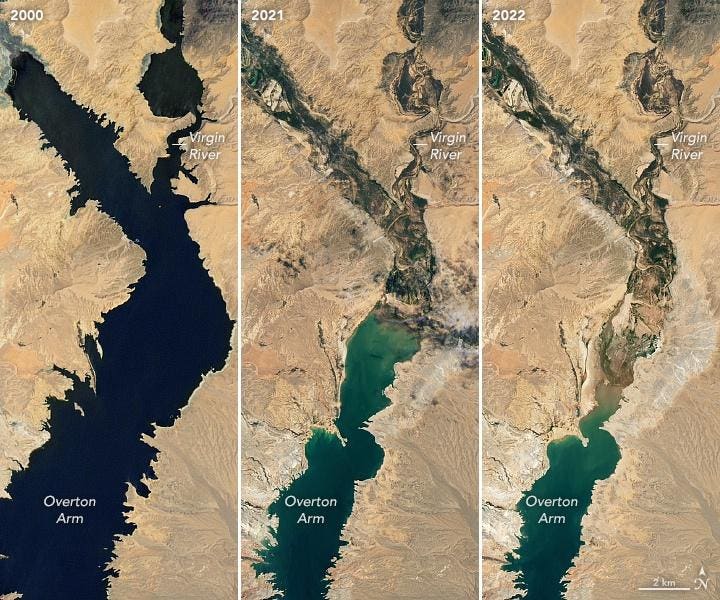 I clearly stated in a social media post earlier this week that water usage, natural variability, and climate change explained stunning images of Lake Mead released by NASA. However, a comment on one of the platforms said something like, “It wasn’t wise to build it in the desert and consumption outweighs changing weather year to year.” While aspects of this statement are true, there are parts of it that could convey misinformation about climate change. Several of my previous Forbes essays have dealt with the “naturally-varying climate” narrative. Let’s dig a bit deeper into why Lake Mead is vanishing, and “yes,” climate change is part of the answer.

When I first saw the comment, I thought to myself, “you can pretty much say that about any weather-climate related disaster.” People and businesses build things along the coasts even as we know hurricanes will always be a part of the landscape. Most homes in the United Kingdom do not have air conditioners. Roadways are constructed over creeks and rivers that inevitably flood. My point is that many things within our society are now being disrupted by “DNA” of climate change embedded in today’s weather events. A growing number of climate attribution studies affirm that statement.

Lake Mead is the reservoir created when the technological marvel that is the Hoover Dam was created. The Landsat 7 images at the beginning of this essay confirm that the reservoir is at the lowest mark since it was filled in 1937. According to NASA’s Earth Observatory website, “As of July 18, 2022, Lake Mead was filled to just 27 percent of capacity.” To the commenter’s point, the nation’s largest reservoir supplies water to tribal lands, seven states and even parts of Mexico. Ok, so what’s going on with the climate change that amplifies the reservoir levels? The ongoing drought in the West is one of the worst in 1200 years according to NASA. In fact, it may be “the” worst. NASA’s website goes on to say, “ The low water level comes at time when 74 percent of nine Western states face some level of drought; 35 percent of the area is in extreme or exceptional drought.” The geographic headwaters of the Colorado region are situated within drought-stricken Colorado and winter snowpack was below average.

According to NASA, Lake Mead was last at full capacity (1220 feet near dam-level and 9.3 trillion gallons) in 1983 and 1999. Where does the water from Lake Mead come from? The vast majority of its water comes from inflow from the Colorado River with smaller contributions from Las Vegas Wash and smaller rivers (Virgin and Muddy Rivers). The National Park Service website points out, “Flow in Las Vegas Wash has more than doubled over the past 30 years as a result of the rapid population growth in Las Vegas.” Local precipitation and groundwater account for roughly 10% of the water in Lake Mead.

If the Colorado River is the main water source for Lake Mead, then we know there is a climate change connection. A 2019 study published in the peer-reviewed Journal of Climate confirmed climate change has reduced the Upper Colorado River flow by 10%, and natural variability alone could not be the only factor. They attributed the reductions to reduced precipitation over the basin and increased temperatures. Several studies also find that recent warming results in reduced snowpack and shifts to earlier runoff times. A U.S. Geological Survey website starts with this statement, “Declining snow cover is playing a key role in decreasing the flow of the Colorado River, “the lifeblood of the Southwest,” by enabling increased evaporation.”

Yes, the paleoclimate record has established past megadroughts in the region, but a 2022 study entitled, “The Press and Pulse of Climate Change: Extreme Events in the Colorado River Basin,” can be found in the Journal of the American Water Resources Association. The authors make a startling point that current warming projections will push natural and human systems past critical thresholds. Often in climate science, such thresholds are referred to as tipping points.

When you factor in these changes and the fact that over 25,000,000 people rely on water from Lake Mead, “Vegas, we have a problem…Or Phoenix, Los Angeles, and so on.” People need water for drinking, cooking, irrigation, infrastructure and so forth. It was already hot in these regions, but studies confirm that temperature distributions are shifting to a warmer regime. Climate change-amplified heat in the West and increasing urban heat islands in the cities are also factors in water consumption. The National Park Service website says, “As communities like Las Vegas become more urbanized, roads, parking lots and buildings have caused an Urban Heat Island (UHI) — a warming of urban areas….coupled with forecasts of drier weather and our continued population growth, will challenge what our urban environment can withstand.” The bottom line is that even if you look at the consumption side of Lake Mead, climate change still rears its ugly head.