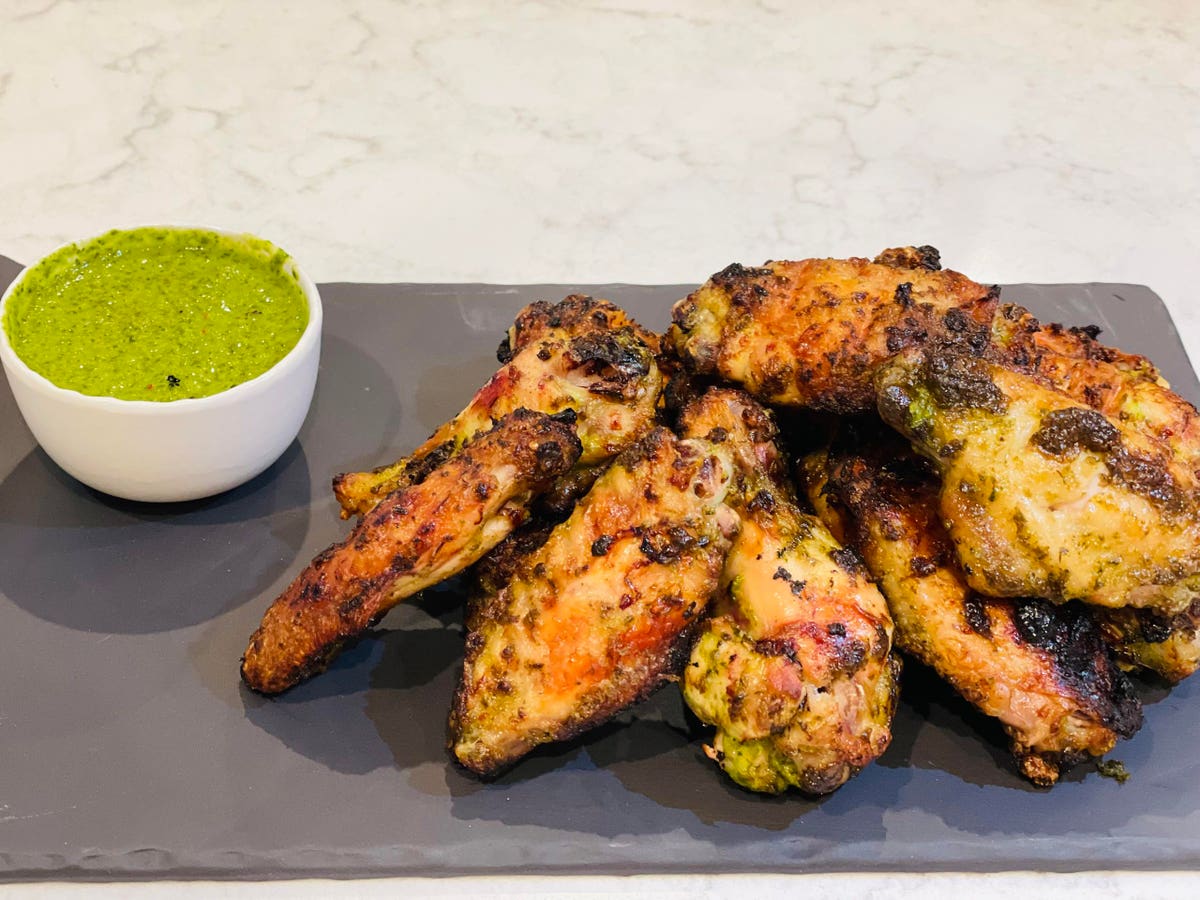 It’s a Hot Wings Summer and that means venturing away from the bottle of hot sauce and stepping up your hot wings.

I have to admit that even though chicken is chicken, I never thought about flavoring chicken wings any other way than a variation of hot wings—hot sauce, hot spice rub, hot oil—that was about it.

A few years ago, I discovered the secret to keeping all that flavor on the wings instead of having it drip off the skin, but other than that, I kept making a variation on a theme. (The secret by the way is a half-cup of full-fat mayo—add that to your grilled hot wing recipe, and you will thank me.)

That is until my smart friend and co-author of What’s 4 Dinner newsletter, Anthony Underwood, suggested that I take my “famous” Chimichurri sauce and make wings with it.

Chimichurri is one of those multi-purpose sauces like aioli that makes everything taste better.

I first learned to make Chimichurri in a food processor and I liked it. It was like a nice chunky vinegary garlic, olive oil, parsley-rich “vinaigrette” that was great for flank steak, but not particularly homogeneous.

But add a blender and it kicks classic Chimichurri sauce to the next level. Take those exact same ingredients, increase the amount of fresh parsley, turn the blender on medium-high and it’s a sauce of another color! Literally, a dark green emulsified sauce with a flavor unto its own.

Once I started making it with a blender, I started using it to dress all kinds of things like potatoes and, beer-can chicken. But I didn’t really think about using it a marinade until Anthony mentioned that I should try using my “secret” wings technique with the Chimichurri sauce.

As soon as he said it, I knew it would taste great. These are not your typical hot-wings wings. They are still wings, with all the things that you love about wings, highly seasoned, crisp, finger food and a great dipping sauce but elevated a little.

The herby garlic and oil and vinegar sauce is rich and a bit peppery but because of the acid in the sherry wine vinegar and the lemon juice, it is completely balanced and works with almost everything.

It is very straight forward with the exception of the parsley—which is the main ingredient. I call it The Great Parsley Debate and I am firmly on Team Curly!

As you probably know, there are 2 main types of parsley—Curly and Flat-Leaf. The curly parsley is coarse and curly with ruffled leaves, and the flat-leaf is flat and slick and slightly shiny. The main reason that I prefer curly parsley is taste. The curly parsley tastes fresh and green and slightly grassy. It brings a fresh clean bright flavor to the Chimichurri. Flat leaf parsley has a stronger more assertive taste and to me tastes like cilantro which is polarizing.

The reason that it is a debate is that chefs tend to favor the Italian Flat-Leaf and think of curly parsley as the less sophisticated, less informed choice—like choosing iodized table salt instead of kosher salt. The truth is that there is a time and place for both and if you want the best tasting chimichurri, I think the choice is curly!

Once you’ve made the Chimichurri sauce, the marinade is easy. Use equal parts Chimichurri and full-fat mayo. The mayo will help the marinade stick to the wings and will become one with the skin resulting in a very flavorful highly-seasoned skin.

Think hot wings but Chimichurri. Chicken wings are marinated with homemade Chimichurri and mayo, and grilled until golden brown delicious! #GBD! The rest of the Blender Chimichurri sauce is your dipping sauce.

Juice of 1 lemon, about 3 tablespoons

Note: You do not need to turn the wings. You will know that they are done when you see crispy bits and the skin has receded from the ends of some of the bones. This won’t happen on all the pieces because of the way they are butchered.