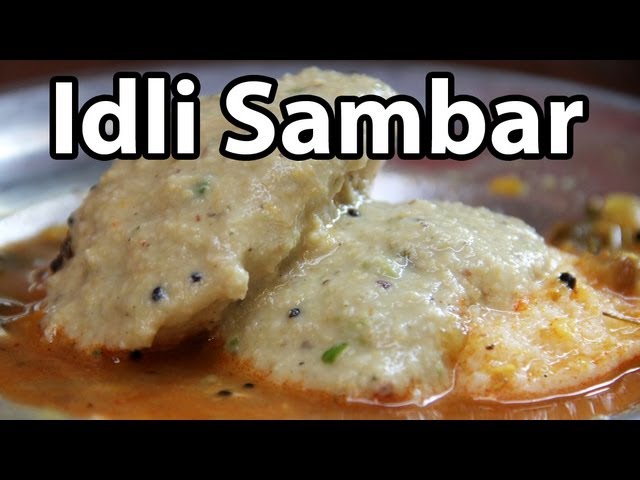 Though it’s originally a South Indian food (http://www.youtube.com/watch?v=AZY1bYzN0lM), idli sambar is now available all over India. Since I wasn’t able to travel to south India this time, I decided to eat a dish called idli sambar while I was in Varanasi, India. The dish is popular especially as a breakfast food (this being because it’s quite easy to digest and goes down well), but you’ll be able to find it for a snack or light meal throughout the day as well. While in Varanasi, India, at a small lane side street stall was where I found some cheap and tasty idlis.

What is idli sambar? There are two different parts that make it up. The first is small little cakes which are made from rice flour and black lentil flour. The flour is made into a batter and allowed to ferment just slightly, similar to a dosa batter from south India. After that the batter is then steamed into little cakes using a special idli steamer. It sort of looks like white cornbread, and it has a similar airy texture. The next part is the sambar and chutney which is served as a side flavoring addition dish. The sambar sauce and chili sauces and dal is all ladles over the plain idli rice cakes to give them some wonderful flavor. This particular sambar was a sauce made from coconut, and it was excellent.

I enjoyed this plate of idli sambar at a small hole in the wall restaurant in Varanasi, India, known as Maa Laxmi Dosa Corner. The vendor specialized in making a variety of south Indian specialities including dosas, uttapams, and idlis. Located in a narrow walking street of the ancient city, he served most of his customers standing in the lane. However, he did have a tiny seating area where one could eat while seated – though I think it would have been a little on the cramped side.

If you want to eat at Maa Laxmi Dosa Corner when you’re in Varanasi, first go to the Main Ghat. Facing the Ganges River, make a right into the narrow alleys just behind the small fresh market area. Navigate your way down the lane until you reach the stall, should only take about 5 – 10 minutes to get there. Enjoy his dosas and also be sure to eat a delicious plate of idli sambar.

Business travel spending might not return to pre-pandemic levels until 2026
The A380’s biggest supporter is asking Airbus to build a new super jumbo
How do people in Asia-Pacific feel about travel right now? It depends on where they live
‘We’re Scaling Rapidly’: Celsius Energy Drink’s CEO To Streamline Logistics After Receiving $550 Million Investment From PepsiCo
The world’s most alarming airplane landings