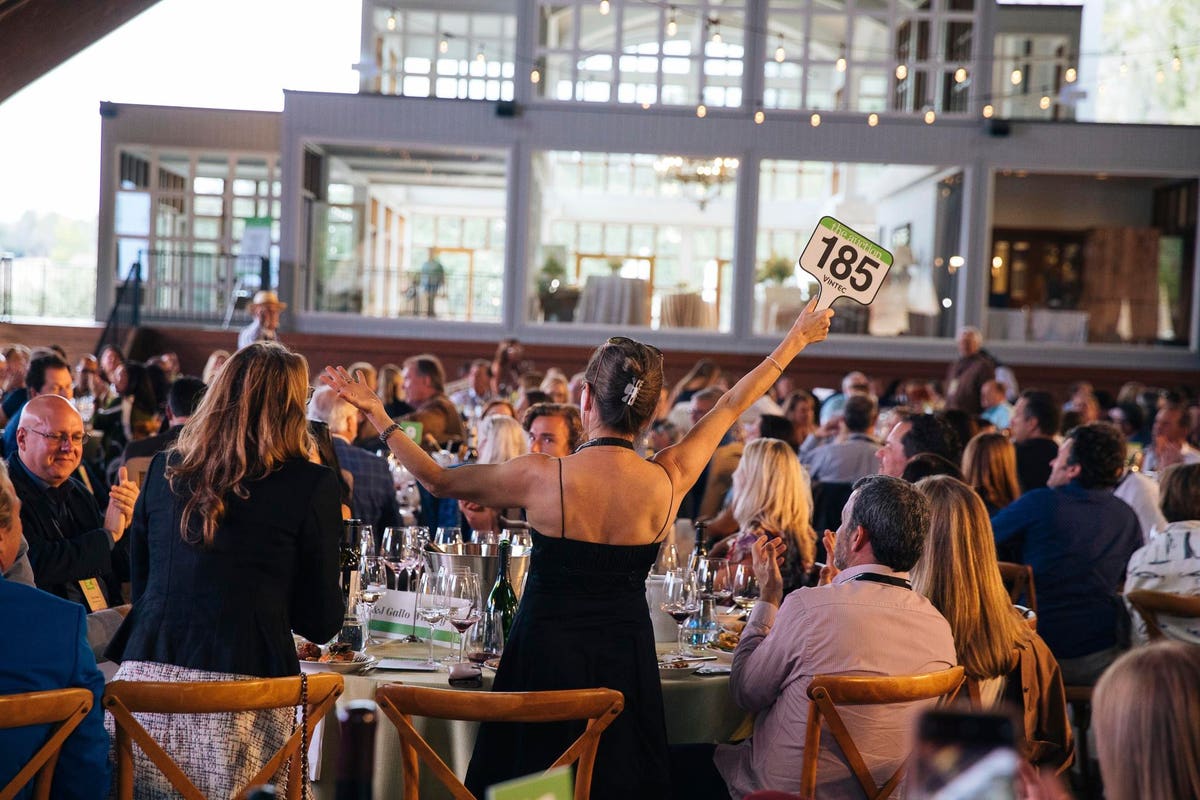 The concept of a wine auction to raise money for charity is an ancient one – dating back to 1859 at the Hospices de Beaune in Burgundy, France. Built as a hospital in 1443, the famous medieval building with its multi-colored tiled roof started the tradition by accepting donations of wine from local domains that they sold to raise hospital funds. Eventually it turned into an annual 3-day auction, which is still held each November.

This wine charity model has been an inspiration to many other famous wine regions around the world, such as Sonoma County, which started their first charity wine auction in 1988. Since inception the auction has raised just over $40 million for local charities. This year’s 3-day event (Sept. 15-17, 2022), filled with winemaker dinner’s at various wineries, a gala celebration at Buena Vista Winery, and an action-filled auction at Chalk Hill Estate Winery, managed to raise $1.8 million in donations, breaking last year’s record of $1.7 million.

The money raised has been shared with more than 400 Sonoma County nonprofits, including childhood education, health, environmental initiatives and emergency relief efforts for wildfires, floods, and the pandemic.

“What I like about donating auction items to the Sonoma County Wine Auction,” stated Darren Humphreys, Owner of Travel Sommelier, a luxury travel firm, “is that the money raised goes to actual people in the local charities. We are at a time in our company where we are in a giving back mode, so we always do our due diligence before supporting specific causes. I feel good about donating here.” Humphrey’s company donated a deluxe 8-day/7-night African safari for 2 people with cult wine and gastronomy experiences, which raised over $19,000 in a frenzy of bidding.

The auction features both online and live bidding events. The 3-hour live auction showcased 30 unique lots, which were auctioned off during a gourmet lunch that included high-end Sonoma County wines along with caviar, wagyu meatballs, charcuterie, and plenty of fresh vegetables from local farms.

Some of the top-grossing lots included a 5-night trip to Paris and Burgundy with vintner, Jean-Charles Boisset, which was so popular that it was sold twice – both times at $55,000, totaling $110,000. Another popular lot was Fund-A-Need, which begins at $100,000 and goes down to $500. This year three bidders offered $100,000 each, with many others joining it at other price points.

Another top grossing lot was a 3 night stay with airfare for 8 guests at a private estate on Kauai for $35,000, which tripled when the donor decided to extend it to two more bidding parties. A 6-night dining and spa extravaganza at the Montage resort in both Los Cabos and Healdsburg raked in $26,000 in bidding, while a 4-night VIP trip to the Bourbon Trail in Kentucky achieved the same amount. Other popular lots were lunches with Sonoma County Leading Male Vintners ($8500) and Sonoma County Leading Female Vintners ($17,000).

Given that Sonoma County is famous for both excellent wine and food, the auction also recognizes a special vintner and chef each year. This years’ honors went to Vintner Honoree Jean-Charles Boisset, owner of 20 wine brands in California, including DeLoach and Buena Vista wineries in Sonoma County. Chef Honoree Dustin Valette was selected for his innovative cuisine at Valette and the Matheson restaurants in Healdsburg.

The Importance of Giving Back

The purpose of the auction to raise funds for the many local charities was an important consideration throughout the 3-day event. Some of the charity organizations attended the winery dinners to thank people for participating in the auction, and many of the attendees were moved by some of the stories.

“Hearing about the impact of our bids can be very moving,” reported Rob Irwin, an attendee from Tulsa, Oklahoma, who has been coming to the Sonoma County Wine Auction for the past 16 years with his family. “It can be a real tear jerker seeing kids who need the money, especially some of the migrant workers. The other reason we keep returning each year is because everyone in Sonoma County is so genuinely friendly. We’ve gotten to know many of the winemakers over the years. There are both great wine and great people here.”

Lehn Goetz, Owner of Rancho Coyote Café in San Diego, and one of the winning bidders for the trip to Paris and Burgundy lot, stated, “We feel honored to be able to give to these local charities. What they do is so important.”

Clay Mauritson, owner of Mauritson winery and Board President for the Sonoma County Vintners, summed it up with, “What you do here will change people’s lives.”